Ranking Every Land with EDHREC – Part 21: Fetch Me a Drink, Slowly! 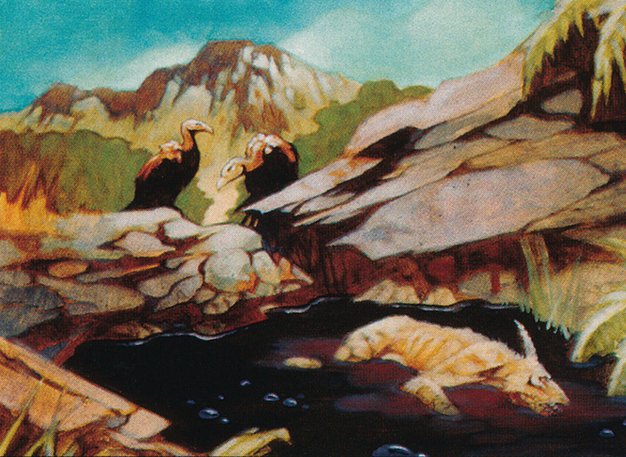 If I'm scheduling this out correctly, this article should go up in the official start of Theros: Beyond Death preview season. (Though if we're calling this the 'start' of the season, does that mean the last 2 weeks of previews didn't count?) Anyhoo, if you need an escape (get it? Cuz it's a new mechanic?) from all the new cards, you've found the right place! I'm here to continue my endeavor to rank every land in Magic based on how many decks they appear in on EDHREC. Don't worry, I'll probably be here until the next spoiler season, too.

Another of many lands that was completely unplayable when it was first released, but has found a home in EDH years later. Paying three life is absolutely not worth it when you start at 20, but is much more palatable when you start at 40. Eight years ago this card was a bulk rare. Now it’s $18.

Although… is it really worth it? I won't deny there’s a lot of value in uncounterable haste that comes down early, but there's just so much downside. There’s no other option to tap this for mana that won’t hurt you. People often die to their own hubris with Ancient Tomb, and this kills you even faster. That, plus the fact this is a dreaded colorless tapped land, means most opening hands with this are unkeepable, and unkeepable isn't even a word! Come on, Hall of the Bandit Lord!

Over, Under, or Just Right? Overplayed: I might give it a pass in decks where the commander has a "kill immediately" reputation like Kaalia of the Vast, but overall, this seems far too cute.

So let's talk about a weird quirk of the EDH rules. Color Identity is a pillar of the format. It's flavorful and it keeps five-color durdle shells from becoming the norm, but to make it work, they have to make the rule fairly specific. Any mana pip that appears on a card contributes to its overall color identity. This oddly includes basic lands like Mountain, which technically have the text "Tap: Add one red mana" hidden in the "basic" subtype.

Now imagine it's pre-2016, and you want to run a deck built around an Eldrazi like Kozilek, the Great Distortion. You can't run any basic lands because they contain mana symbols outside your color identity, so what do you do? You find 40 random lands that tap for colorless. In you go, Wintermoon Mesa and School of the Unseen! It doesn't matter what the cards even do. You might get a tiny bit of extra utility from random lands like Maze of Shadows, but you don't really care. You just need lands that tap for mana. This also meant that budget players had a much harder time playing colorless because they had to spend about $15 that they didn't have on random lands that aren't very good.

That was before Oath of the Gatewatch and Wastes were released. Now that these basics exist, no need for the random colorless land mana base, right?

Well, since that time, a couple things have happened. To vex budget players, the card spiked to $1.50. That's $60 for a 40-land mana base. At that point, resorting to the '40 random colorless lands' method of days past is much cheaper. For non-budget players, colorless lands have gotten much better over the last four years. There is some utility in running basic Wastes that can be fetched with Wayfarer's Bauble or Myriad Landscape, so it's probably worth running three or four, but running 40, or even 10 Wastes? We have stuff like Blast Zone, Cryptic Caves and Inventor's Fair now. We don't need Wastes anymore. This card can't even justify its own existence. It's actually... kinda sad.

Over, Under, or Just Right? Overplayed: There are people that just throw 37 basic Wastes in a colorless deck and call it a day. I could argue why that's not great, but I somehow spent a bunch of paragraphs on basic Wastes, and typing out "Wastes" looks weird every time I do it, so I'm moving on.

Hmmm. I can’t think of any Elves that I’d want to untap with this. I mean, what do Elf decks even want to do? Make a million mana with Priest of Titania? Find multiple creatures with Fauna Shaman? Put giant Eldrazi in play with Elvish Piper? I can't think of any reason why these decks would want to untap anything.

Over, Under, or Just Right? Just Right: There are more decks on EDHREC running Wirewood Lodge than there are Elf-themed decks.

I think this is another case of "Rustic Clachan symptom" where people see the part about Elementals and assume it's just a tribal card. Heck, I did that. I saw Flamekin Village in a game ages ago, not even in an Elemental deck, but the game finished up and I didn't think about the card again until I made this list.

This card is great! People play Hanweir Battlements and sure, this card is worse, but it's still haste for two mana! On a land that taps for red! What's not to like?

Over, Under, or Just Right? Underplayed: I’m putting this in so many decks.

Let’s play "Six Degrees of Sorrow’s Path!" How much worse do you need to make a card before it stops seeing play? The Onslaught Cycling lands are awesome and widely played. The Urza's Saga Cycling lands are a fair amount worse, but still playable. Here comes Hour of Devastation making the Urza cyclers even worse. Are they still good enough?

Ordinarily, I think I'd say no, but Hour of Devastation is a recent set that a lot of people opened. I don't like the Memorials, but they see play because a lot of people started during Dominaria and happened to have them. So here's a cycle of lands that's worse than other options, but totally playable and owned by a ton of people. Might as well let them have this one.

Over, Under, or Just Right? Just Right: Is it worth playing these over the one-mana Cycling lands? Probably not, but if you own these, you might as well play them.

Back a million bajillion articles ago, I mentioned Rustic Clachan as a decent land for aggressive decks, and this is basically that, but better. Rustic Clachan is a slightly better topdeck, but Reborn doesn't cost any mana to activate, and it's in a color that cares more about +1/+1 counters, so I'd give the edge to Reborn. The problem is Clachan is in less than 100 decks, while Llanowar Reborn is in over 3,000. Llanowar Reborn is cool, but it's not an auto-include. One counter alone is nice, but it’s not useful by itself. If you have synergy with the counter in decks like Reyhan, Last of the Abzan, I'd run it. In decks like Ezuri, Claw of Progress though, well....

Over, Under, or Just Right? Overplayed: I don't think this card is bad. It just doesn't do enough to be in this many decks.

Huh. I was expecting this card to be way lower. It's a Reserved List card, after all, and I've personally only ever see this card in play once. I barely see it in decklists online or even see it mentioned. I was expecting to be able to gush about this card. I was going to talk about how being able to save any one creature for one mana is amazing, and if you’re running Heroic Intervention, you might as well run this, but apparently that's not necessary. Everybody already figured that out.

What am I even here for?

Over, Under, or Just Right? Just Right: I can talk about Wastes some more. Is that what you want?

I’m way more down on these than the Cycling Deserts, and I don’t really know why. They’re better than the Desert cyclers, but I just dislike these things. I think it's just the Precon Effect bugging me. The Onslaught cyclers are just better in every way, like the kid in school that works hard and gets good grades. The Amonkhet Desert cyclers were in a recent set near Magic’s current golden age, like the kid that doesn't work hard but is friendly to everyone and has potential, so everyone helps them cheat. The only reason these have comparable numbers to the other two is because of their many precon printings. They're the kid who gets good grades because their dad built the school cafeteria. He’s not up here based on merit, he’s here because of staff favoritism.

Over, Under, or Just Right? Just right: Despite my ravings, these are fine.

What happened to this cycle? Just a couple years ago, this was the indie darling of budget cycles. Fetchlands are exuberantly expensive, and out of reach for most Magic players, so anything that might serve as a alternative to fetch lands is automatically worth considering and these do a decent impression. They enter tapped, but they can get Shocklands and Battlelands. I used to hear this cycle talked about a lot as a budget alternative in five-color decks, but now I barely see them mentioned. It's like when they got reprinted, people realized they aren't as good as they thought.

Let’s start with the fact that if you have no dual landss with basic land types, these are bad Evolving Wilds. They’re worse than Guildgates in two-color decks, and worse than Ash Barrens in three-color decks. As for the claim that they’re great 'budget' fetch lands, well, we'd have to define 'budget'. Obviously, we're not talking about using OG duals with these, but even Shocklands are $7-10 each. Fetchland mana bases usually need as many Shocks as possible, so that means spending between $50-100 on Shocks, and I thought that’s what we were trying to avoid. What you can get with these on a budget are the Battlelands (which also aren’t super cheap) and the dual-color Cycling lands from Amonkhet. Fetching either of these is glacially slow. The slow fetches already enter tapped, so fetching another land that enters tapped now puts you two turns behind. That's really bad. For budget purposes, you might as well just run standard taplands. They're cheaper and faster than the slow fetches if you don't have the money to put into Shocks.

If you're part of the niche community that's open to buying Shocks but doesn't want to buy fetches, are these worth running? Maybe, but at that point there are a plethora of options you could run. You could run Mountain Valley, or you could run Spire Garden, or Grove of the Burnwillows, or Karplusan Forest. None of these can fetch a Breeding Pool, but all of these enter untapped, and don't require you to warp your mana around Shock lands. You don't need fetches to build mana bases. Just run taplands if you're on an uber budget, or cheaper untapped duals if you don't want to sell your right arm for fetches.

Over, Under, or Just Right? Overplayed: I will die on this hill. These are bad. And can we please stop putting them in precons?

I'll let you get back to preview season! There's probably some midday spoilers that just came in, and I bet they're pretty dang good. After you check those out, let me know what you think about this batch of lands. Which Cycling lands are your favorite? Do you get some good use out of the slow fetches? Let me know in the comments below! Till next time!