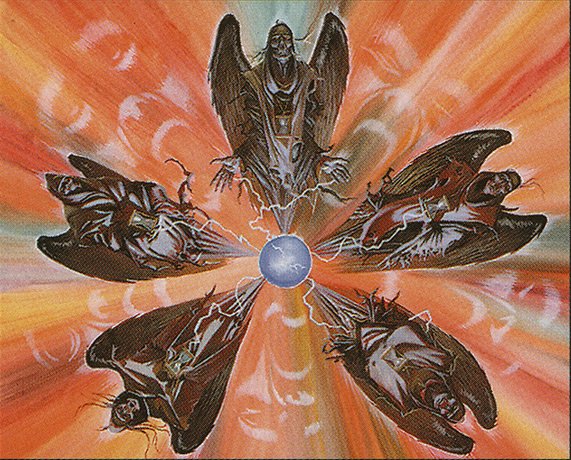 This installment was recommended by reader Stephen Bahl months back when I asked the community about cards they'd like to see. This time, we'll be heading for the end times. Not the apocalyptic aberration that gave Superman a temporary glimpse of afterlife, nor the Bulletin of Atomic Scientist's catastrophic clock that attempts to predict humankind's self-destruction. Nope, we're looking at the classic combo enabler: Doomsday.

Outside of your occasional Four Horseman of the Apocalypse eschatologically-themed (not ex-Legacy deck!) EDH deck, Doomsday is often included for its combo potential. First printed in Weatherlight (1997), Doomsday has had a long history of enabling wild combos and synergies, whether that's playing a shell game with Shelldock Isle and Emrakul, the Aeon's Torn, or the ol' Tendrils of Agony Storm combo enabled by Lion's Eye Diamonds and Sensei's Divining Top. There just aren't many cards out there that singlehandedly require entire sites dedicating thousands of words to explaining just how you can set up a win. The Commander Spellbook page also has a number of entries, showing just how diverse Doomsday can be for enabling a win.

It's the kind of card you have to build around, and in the words of Louis Scott Vargas explaining a Legacy Doomsday deck, you:

"Cast Doomsday...or die trying...There's no backup plan, no alternate win conditions, nothing. In the game of Doomsday, you win or you die."

How fitting for a card that invokes the end times. So what about EDH? Doomsday has long graced the halls of cEDH canon, but where does it stand nowadays?

As is tradition, we’re focusing on rank rather than the number of decks (i.e., decklists), as this helps account for fluctuations in decklists scraped in any given timeframe, which helps us compare the results to other colorless cards. Remember that the lower the rank (closer to 1), the more popular a card is!

The results for Doomsday can be seen here: 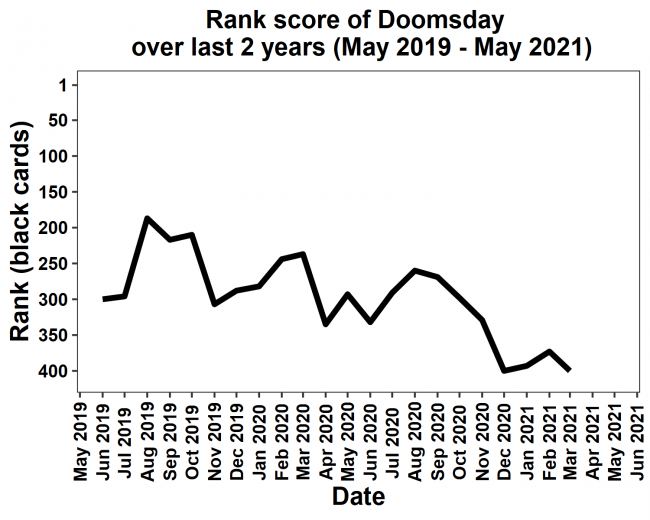 Well, it appears Doomsday has been trending downwards for the last couple of years. In fact, as of March 2021, it's completely fallen off our scrape threshold for this series, no longer in the top 400 black cards.

Notably, Doomsday still features prominently in a number of higher-powered decks. In Grenzo, Dungeon Warden, it still enables fascinating combos with the bottom of your now five-card library, while Yuriko, the Tiger's Shadow can start flipping cards off the top after getting in with Ninjas. As for K'rrik, Son of Yawgmoth, turns out you can just cast it for six life rather than any mana. Plus, you're going to lose half of your life anyways — what's a little more? K'rrik can help circumvent some of the need for mana and rituals by just using life instead, which makes it a great home for Doomsday fans.

Finally, one of the things we can look at is the popularity organized into bins, making sure we don’t double count any previous categories (i.e., not counting top 100 again in the top 150).

The shift is slowly towards the lower end, and I for one am curious to see if Doomsday ends up seeing a resurgence in a few years time.

It's now Time to Reflect and Reconstruct some history!

For the most part, Doomsday has been a fairly price-accessible card, hovering below $5. Only in March 2020 did it see a significant spike, nearly cresting $20, and it has remained in the ~$15 range ever since. That spike, as it happens, came shortly after the printing of a particular card: Thassa's Oracle (Theros: Beyond Death, released January 24, 2020).

No surprise that in both EDH and even Legacy, decks were elated to have their Doomsday piles buffed with a less-conditional, harder-to-interact-with Laboratory Maniac. With the Oracle, you don't have to draw an extra card as you would with Laboratory Maniac or Jace, Wielder of Mysteries, which can be a big ask when your operating on such slim margins after Doomsday cuts your life total in half, your library down to five, and your paths to victory to a knife's edge.

But Doomsday wasn't the only card impacted by the printing of the fish with foresight. In fact, I think a lot of Doomsday's decline in popularity seen above can be explained by its competitors.

What happens when the proverbial end times don't come as foreseen? Well, we've seen it before. Whether it's the 'Zorpies' changing the date in Parks in Recreation, or a bunch of Westerners in real life misinterpreting Mayan calendrics, many a sun has set on a Doomsday only to have been followed by an Approach of the Second Sun.

As it turns out, Doomsday isn't the only black card with the potential to shrink one's library to a pile poised to win. I think two other cards are worth analyzing here to help contextualize Doomsday's decline: Tainted Pact and Demonic Consultation.

In one form or another, both of these cards will rip through your library, either by virtue of the singleton format in the case of Tainted Pact, or simply naming a card knowingly not included in your deck in the case of Demonic Consultation. Since they're other combo-enablers in black, I thought it would be good to get their data as well.

Here are the results below. Feel free to scroll to see the cards individually and compared to one another on the same plot.

Well, how about that! There is a pretty strong inverse relationship between Doomsday and these two enablers.

The case for these two options over Doomsday may vary, either by their lesser mana value, less fragility, or even time. Doomsday piles are notoriously time-consuming to sort out, given the sheer complexity and contingencies when faced with cards already draw, in hand, played, in the graveyard, etc. If people want something more 'compact,' they may be incentivized to try one of these other two options over Doomsday.

Not All Doom and Gloom

Despite the trend downwards (and perhaps despite its subtle phasing out as cards like Tainted Pact and Demonic Consultation become ever more popular) Doomsday will always have a spot in some players' hearts. It's notoriously build-around, skill-demanding, and it embodies the old-school black notion of great power at great cost(s).

Heck, there're quite a few commanders out there that have been printed recently that may take advantage of Doomsday, like Prosper, Tome Bound to help mitigate the mana, Blex, Vexing Pest (or, really, Search for Blex) to filter your 'entire library,' and maybe even Firja, Judge of Valor to Ransack the Lab down to your requisite pieces.

What about you? Have you ever run Doomsday? Do you still? What decks do you run it in? What about the times where it flopped? Sign off in the comments below!

Once again, shoutout to Nate Burgess (@MisterPlorg) for all the data scraping help!