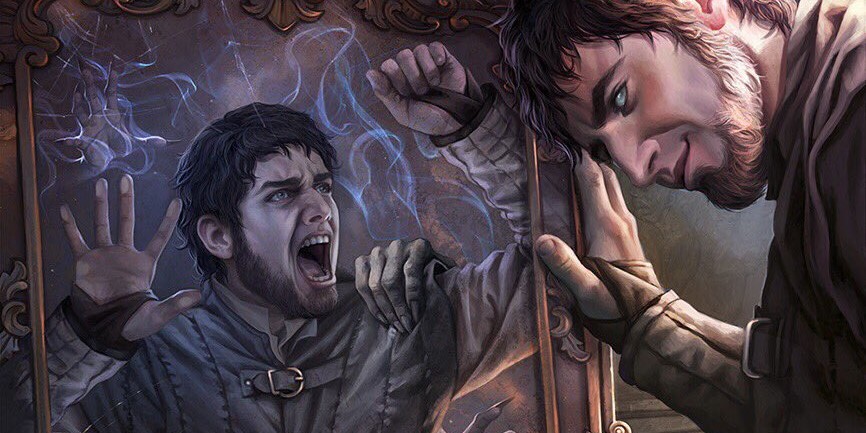 I'll Do More with Your Life Than You Ever Could

Welcome to Rolebuilding, where I blend my fraternal twin hobbies of tabletop roleplaying games and Magic: The Gathering for your delight and amusement! In this series we choose a role or character from the realms of Dungeons & Dragons and embark on a deck construction quest based on their motivations. Today we're playing a mischievous, murderous player character: Changeling Rogue. Let's dive in!

Eberron: Rising From the Last War tells us, "Changelings can shift their forms with a thought. Many changelings use this gift as a form of artistic and emotional expression. It's also an invaluable tool for grifters, spies, and others who wish to deceive. This leads many people to treat changelings with suspicion." Because most people fear them, changelings try to blend in. Some might live their whole lives with one chosen identity, without making anyone aware - even their own family - that they are shapechangers. Others embrace their abilities and might create different identities for different situations even within the same hour of a day.

We will be embracing our shapechanging nature for this Rolebuild, but we'll live somewhere in between those two extremes. Our rogue uses their shapechanging nature to adopt the personas of other people immediately after relieving them of their last breath. Our targets are typically the rich, powerful, and corrupt. Why do we do this? Maybe we work for a shadowy syndicate intent on establishing world peace or maintaining a philosophical balance on the geopolitical stage. Perhaps we're following our own moral imperative and don't like when bad people get away with bad things. We could also be working for a powerful government who wants to use our talents to facilitate a peaceful takeover of a rival.

Part assassin, part spy, we learn about each target through observation before taking any violent action, sometimes for months or years. We want to know their secrets, their history, their beliefs. After all, simply changing your shape does not make you become a person, especially someone like a King or Queen whose life is completely in the public eye. We need to dig deeper and understand who they are. In this stage we may transform into the form of a servant or guard so we can inconspicuously stay close to our target.

Once we assassinate our target, then the really fulfilling work begins. We become them, and we make the decisions that we think that they should make (or that we're being paid to make). For example, if our target is a corrupt king who takes bribes from various nobles, we now have the opportunity to unwind that net of corruption from the inside out. If we target a bloodthirsty baron set on conquering other lands, becoming that baron allows us end a war before it begins. As a rogue, we have the devious skillset this sort of work requires - stealth, charisma, deception, and sleight of hand.

Our quest takes shape: assume the role of our opponent as we annihilate them with their own secrets and our knife.

You Are What You Assassinate

Such a specific sort of quest will require an equally specific strategy, so let's start with our commander. Looking through the Top Commanders for the Clones theme, I strongly considered Volrath, the Shapestealer and Lazav, Dimir Mastermind for commander of this deck. Either are appropriate, Lazav even more so since he copies creatures when they die. Ultimately, it was the art that finalized my decision for me.

He's stealing someone's shape right in front of their face! Even the beard! Once someone steals your perfectly manicured beard, then you know you're done for.

I'd like to think that this means that Halfdane reveals his identity, and plan, to the victims before killing them, which seems particularly brutal. "Hello, evil person, I'm going to take over your life and make some better choices than you have been making. Thank you for the identity. Goodbye."

Coming in at a whopping 15 decks on EDHREC, Halfdane's commander page indicates he's mostly played as Clone or Shapeshifter tribal. Tribal strategies don't have strong synergy with his ability, nor do they apply much to our quest, so we'll need to branch out. In Esper colors, Halfdane is perfectly poised to bring together two typically disparate strategies that should help us reach our objective.

Mill and Voltron don't typically go together, but since we want our opponents' knowledge and to (sneakily) smash them in the face, this seems like an appropriate time to combine them. Many of our card choices will come from these two EDHREC theme pages.

Generally speaking, we want to copy our opponents' creatures. In a typical multiplayer EDH game, someone will be playing a fatty or two, and that's who we'll be holding up the mirror to. Since Halfdane's ability make his base power and toughness match target creature's current power and toughness, we can get away with a lot of shenanigans, which we'll get to later.

If our opponents aren't playing big creatures, we need some large creatures of our own, and that's where Consuming Aberration, Evra, Halcyon Witness, and Serra Avatar come in. The Aberration is the perfect blend of our two strategies, providing a huge creature for Halfdane to copy while also effectively milling our opponents. Our goal here is to make Halfdane as giant as possible so we can smash some face with him, or do other fun things you can do with giant creatures.

A giant Halfdane can do a good Craterhoof Behemoth impression if equipped with Dragon Throne of Tarkir. This card's downside, the line of text that gives him defender, is less of an issue since we'll typically have at least two large creatures on the battlefield if we have any at all. Phenax, God of Deception gives us an outlet for our large creature(s) if we can't get through with an attack. I did not pack this deck with Clones, but I have included a few like Spark Double and Sakashima, the Impostor that can clone our commander, Aberration, or another fatty for double or triple the fun.

It's not terribly difficult to make our four-drop commander into a huge threat, but he'll need help getting through for the kill.

In addition to the Dragon Throne, we have other ways to make sure Halfdane and our other big threats get through. Shadowspear needs no introduction, and Whispersilk Cloak gives us both protection and evasion. We have a handful of useful Auras, like Steel of the Godhead and Curator's Ward, which have additional synergy with Equipment/Aura crossovers Sigarda's Aid and Open the Armory. We also have Trailblazer's Boots on our Equipment rack, and Thassa, God of the Sea provides card selection in addition to evasion.

We're including some of the most powerful mill artifacts and enchantments, which some of our copy spells, like Mirrormade and Clever Impersonator, can make doubly effective. Mesmeric Orb, Psychic Corrosion, and Memory Erosion all have an immediate impact that affects all of our opponents. Manic Scribe is a great early blocker that can also put in some milling work once we have Delirium online. We want to avoid mill cards which target a specific opponent because we're looking for sheer quantity of cards in the graveyard.

Mind Grind and Duskmantle Guildmage can combine for a sneaky win. We're also including the three main wheels available in our colors, of which Whispering Madness is particularly useful for its reusability when we deal combat damage.

With Graveyards, Bigger is Better

What does all this milling give us? We need to find a way to reap value from those giant graveyards since milling, itself, does not impact the board.

We're harvesting secrets and using them against our victims, so it's only right that we'd get stronger the more information we've looted from their inner circle. I love the flavor of our power increasing the more creatures there are in our opponents' graveyards; it feels like we've learned an important secret from someone close to our target that we're now using against them. This soft power increase is reflected in our P/T and is the most satisfying way to complete our quest.

Because of Halfdane's unique ability, which takes a snapshot of power and toughness but does copy the actual creature, we can get double the benefit from our big-power Equipment like Bonehoard or Blackblade Reforged. Consider this example: we have Wight of Precinct Six on the battlefield, equipped with Bonehoard. There are 8 total creatures in our opponents' graveyards, and 3 in our own, so Wight is a 20/20. During our upkeep, we have Halfdane copy the Wight's power and toughness, becoming a 20/20, himself. During our main phase we equip Bonehoard to Halfdane, making him a 31/31. If we have any Equipment that grants evasion on board, or enough mana to activate Rogue's Passage, someone is going to die this turn.

Most of our remaining slots are used for Equipment and mill support, card draw, and artifact ramp. We've saved a few slots for playing politics since we are a rogue in a King's court, after all.

Duelist's Heritage is particularly deadly with all of the evasion we're running for our commander. We can also use this as a political tool to assist our opponents in eliminating one another because it triggers on any attack, not just ours. Bident of Thassa can force these attacks and provide us card draw for being aggressive.

Since Halfdane has an upkeep trigger, to prevent our lines of play from being too predictable, I've included Leyline of Anticipation and Vedalken Orrery. We can combine these with Sigarda's Aid to create the sneak attack that rogues are famous for.

Add in a bit of recursion, some mill-themed vegetables and our Changeling Rogue deck looks like this:

As the light fades from their eyes, our victim dies with the understanding that their life continues on, but under another's control. No funeral will mark their passing, at least, not until a time which is convenient for us. Their secrets, relationships, and power belong to us now. Do you think we've completed our quest with this list? What would you add to a changeling rogue's build? What other quests could we embark on? Let me know in the comments below, and as always, thanks for reading!