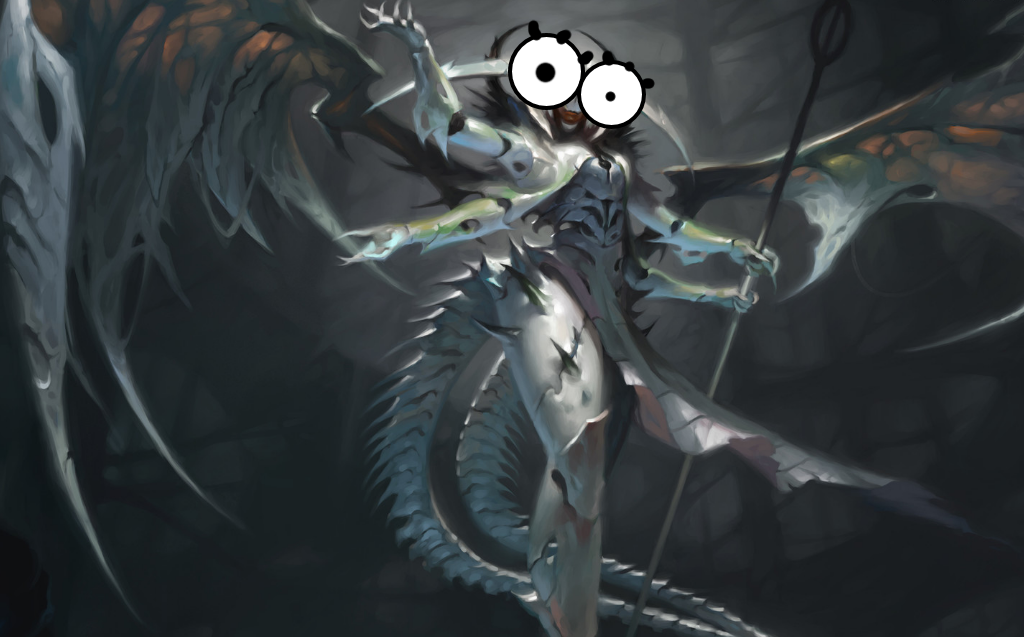 Greetings, fellow EDH addicts, and welcome to another iteration of Shape Anew, where we will create a decklist around super popular commanders, but must use at least 40 cards not featured on their EDHREC main page! Different cards are explored to find original strategies for these popular commanders. This month, it’s time for none other than:

I Hear an Angel Singing

Of all the legendary creatures that have come out in the years since Commander was endorsed by Wizards, I think Atraxa, Praetors' Voice has had the most impact on the format. Until recently, she has been the most popular commander, and for good reason:

Today, we’ll find that even after all these years there’re still some unusual ways to build her an entourage. A special card type, seemingly made for Atraxa, and since Theros Beyond Death, I think we have enough of them to make them our theme.

Today we’ll be telling the tale of our epic Sagas:

The first reason Atraxa is such a perfect fit for Sagas is her wide range of available colors. With relatively shallow themes, it’s important to take everything we can; it’s the reason most of my decks are helmed by commanders with three or more colors.

But onto the enchantments themselves! With two sets containing them, we have 20 possible Sagas at our disposal. Unfortunately, not all of them are relevant. The Antiquities War cares about artifacts, which we lack; The Mirari Conjecture cares about instants and sorceries that aren’t very prevalent in our deck, either; and Chainer’s Torment and Fall of the Thran just have lackluster effects that do little more than put a target on your back. So that leaves us with 16.

The good news is that many of these leftover Sagas fulfill crucial jobs: acting as removal with Elspeth Conquers Death or Elspeth’s Nightmare; granting us card advantage, like Medomai’s Prophecy and The Mending of Dominaria; putting down fodder with History of Benalia, or actual threats with Kiora Bests the Sea God. And while Atraxa cares about the lore counters these Sagas use, we can thoroughly enjoy the double Proliferating benefits Song of Freyalise or Triumph of Gerrard grant with their +1/+1 counter distribution. Ah, the synergy!

The second reason Atraxa fits in perfectly with our Sagas is her Proliferating ability. During the Theros Beyond Death drafts, you might’ve found yourself unable to control your lore counters. Sometimes they come down too low, sometimes too fast. This aspect of the deck demonstrates how we can turn our Sagas into pseudo-planeswalkers.

First off, increasing the counter count. Our commander does a wonderful job of helping us burn through Sagas left and right, but we can’t rely on her being on the battlefield every turn (I would even say that especially Atraxa has a tendency to die to removal), so let’s add more Proliferation! This is not just as redundancy, as all Proliferation effects stack. We might easily be able to activate an entire Saga in a single turn! Cards like Merfolk Skydiver or Yawgmoth, Thran Physician do this constantly, while we also pack one-time effects like Wanderer's Strike. And don’t overlook our honorary Proliferate cards like Skyship Plunderer or Pir, Imaginative Rascal.

Secondly, decrease the counter count. Sometimes, we just want to trigger an effect over and over again. Just remember that this can’t be done with the final chapter! Hex Parasite, Thrull Parasite, Ferropede, or Power Conduit can help us out turn after turn in this regard. Throw in some counter-increasing shenanigans, and we can trigger two chapters or more per turn! At this point, it truly feels like we’re manipulating planeswalkers.

As some of you might know, Sagas are enchantments. Not just in Theros Beyond Death, but throughout Magic history, we’ve gotten numerous effects that synergize with this card type. This is also where most of our win conditions are. Daxos the Returned or Celestial Ancient, for example, can easily take over a game, and both have effects that can be enhanced by our commander Proliferating them.

Many players might also be familiar with the enchantress creatures, those who allow you to draw a card whenever an enchantment is cast. We play a few like Femeref Enchantress and Setessan Champion, which will in time draw us quite a few cards. Zur the Enchanter, while not an enchantress, himself, can also provide quite a lot of card advantage if he sticks around long enough.

Lastly, Sagas count as Historic permanents, a batching keyword introduced in Dominaria. The nice thing is that these cards also care about artifacts and legendaries. We have a surprising number of legendary creatures in our 99, so Historic matters and is a welcome addition to the package. My personal favorite is Weatherlight, which is able to churn out value turn after turn and is very underappreciated.

But Sagas die, and that’s sad. Because of their tendency to do so and the small number of them that we run, it’s a good idea to add some recursion and flickering to the deck; both reset the chapters and let us use the Saga a second time.

For flickering, the infamous flicker commanders pop up their heads. Brago, King Eternal and Aminatou, the Fateshifter say we can flicker one of our nonland permanents, which include our ever-important Sagas. And no flickering category would be complete without a mention of Venser, the Sojourner. Note that the mentioned planeswalkers can, again, benefit from all the counter synergies we have flying around!

For recursion, white gives us plenty of options. Starfield of Nyx and Dance of the Manse are especially fun, as they help us swing in with our Sagas for the win. That’s an achievement to unlock if I ever saw one. As for creatures that help us recur, my preference is always to proactively be able to cast my recursion creature and cash it in later for that recursion: Tragic Poet trumps Auramancer in my opinion.

No Commander deck is complete without ramp, of course, although we’re only able to dedicate a small portion of the list to it today. The pieces of ramp were chosen to synergize with either counters, like with Pentad Prism, or with enchantments like Utopia Sprawl, and aim to get Atraxa out as soon as possible. There’re also some cost reduction with cards like Starfield Mystic, who can, of course, be Proliferated, himself.

Sagas are fun, so I’ve wanted to build around them since Dominaria. The problem, of course, was their number. It’s nice to have these kinds of ideas in the back of your head, as a set like Theros Beyond Death can just suddenly make it viable. It quickly lets you construct something unique.

For example, these 50 nonland cards in the deck don’t appear on the EDHREC main page:

People who like playing a Atraxa decks (or any deck) that focuses on planeswalkers, will also like a Saga-centric version. The interactions themselves are different from what you might be used to, as there’s just more specific synergy possible with enchantments. I’m positive that I've failed to see some cards or interactions that can benefit this Proliferate-enchantment combination we’ve got going on in this deck, so I encourage everyone to take a dive themselves!

Atraxa, Praetors' Voice doesn’t include red, which is a shame as I wasn’t able to show off the red Sagas at all. There isn’t an immediate candidate to helm a Saga deck that focuses on red, so I would be interested to see where such a path might lead you. Red does have some counter synergies, as well, in the form of cards like Volt Charge.

I am very keen to see what you can come up with. If you have any results you’d like to share, you can send it to me via twitter or reddit (@ellogeyen and /u/ellogeyen). I’m open to any comments and discussion regarding the content of the article as well.

Next month, we’ll put a target on our head! See you then!