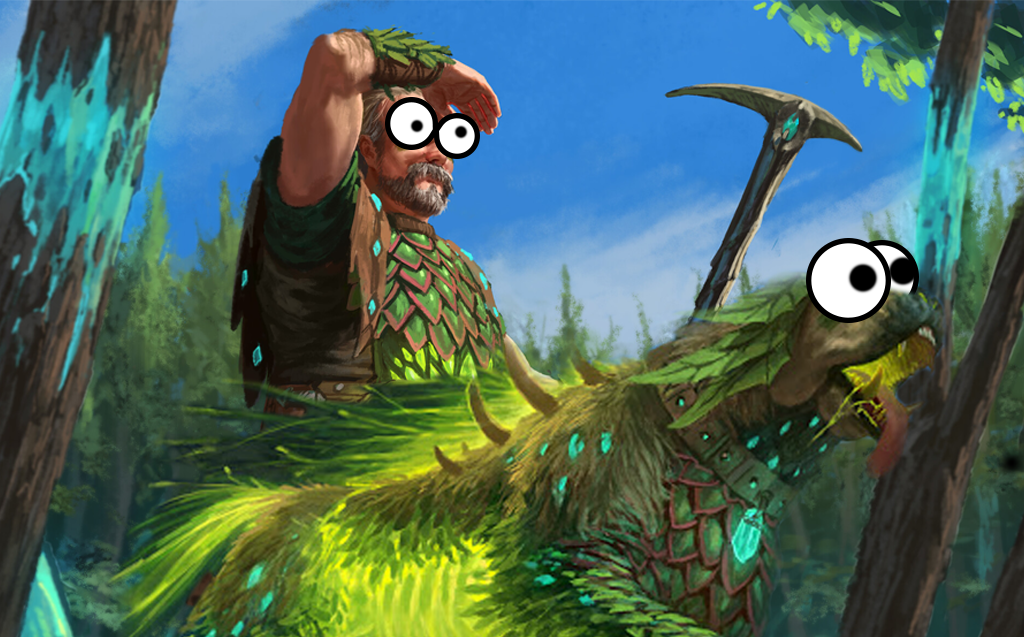 Mirror, Mirror, on the Wall

Greetings, fellow EDH addicts. Welcome to another iteration of Shape Anew, where we will create a decklist around super popular commanders, but must use at least 40 cards not featured on their EDHREC main page! Different card choices are explored to find original strategies for these popular commanders. This month, it’s time for none other than:

Who is the Goodest Boy of Them All?

Even though Commander decks generally include 99 cards, tiny decks really intrigue me. In quarantine, I’ve been playing a lot of Dominion, where thinning out my deck while making it as efficient as possible is a viable strategy and my favorite thing to attempt. Some time ago, I found out that this strategy is also applicable in Magic:

If we were to get some cards in exile, we can use those cards to construct a perfectly filled and ordered library. Our goal is to gather the right cards to win in any scenario. The great thing is that Mirror of Fate enables us to stack the remaining cards of our library in any order, giving the opportunity to react to the board state before actually winning.

Pako, Arcane Retriever and Haldan, Avid Arcanist will helm our Mirror-based monstrosity. They are the most popular partners from Commander 2020, as well as my favorite pair. For me, this stems from their inherit card advantage and possibilities. Even if our own deck would be a hot pile of garbage, most games, Pako will be able to fetch us some decent cards. On top of that, the Dog becomes a sizable threat very quickly.

Pro tip: play Haldan only when you can immediately cast a card with a fetch counter with him, not whenever you have three mana available. Odds are he will die before Pako attacks, at which point he does nothing more than waste a turn!

As we’re crafting a deck that tries to win through (ab)use of Mirror of Fate, winning off an empty deck seems like the most obvious solution. For that, we'll play Jace, Wielder of Mysteries. An obvious advantage that this Jace has over other similar win conditions is that a) Jace wins immediately on an empty library, and b) Jace is useful when our library isn't empty, as well. Killing him doesn't hinder us, as we’ll have multiple methods to exile him from our graveyard to mirror him back into our library, draw a card, then win the game.

We also pack an additional punch that is loosely connected to our Mirror of Fate strategy: cheating either Darksteel Colossus or Worldspine Wurm into play with Proteus Staff, Oath of Druids, Divergent Transformations, Indomitable Creativity, or Reality Scramble. The latter two also have the ability to fetch our beloved Mirror!

The reason that both strategies work decently together is the shuffle clause on our game-winning threats. Although we might mill them in our graveyard or have them killed, they return to our ever-smaller library. Therefore, it is very difficult for our opponents to actually get rid of them as we might fetch them from that graveyard again, or even draw them. Especially Reality Scramble gives us a nigh invincible creature loop.

We want to return exiled cards to our library, but for that we need to pinpoint the cards we want to exile. The easiest way to do this is exiling them from our graveyard. Remember, though: we cannot use creatures or artifacts to aid us, or else we ruin our Reality Scramble synergies…

The best mill card is probably Chronic Flooding. Its original intent was to be put on an opponent’s land, but it’s so much more potent on our own. Brain Freeze is excellent as well; since it’s an instant, casting it when another player has cast a few cards can easily decrease our library size by 12 or 15.

We pack several ways to turn our graveyard into a sort of toolbox. My personal favorite is Underworld Breach, although cards like Once and Future and Reclaim synergize better with Pako. We run some vital cards, so being able to get those back is just as vital. The all-time star is Regrowth, which very cheaply returns any combo piece we might’ve lost.

Shuffling cards in from exile shouldn’t be our only way to sculpt our library: we’re adding Krosan Reclamation and Memory’s Journey to shuffle them in from our graveyard, as well. Once the deck runs out of cards, our graveyard becomes our deck. Sorta. Once these cards are flashed back and exiled, we can easily return them with our Mirror, if necessary.

Another cool trick: if one of our commanders would perish, just let it go to the graveyard. Then, shuffle it into your library with one of the shuffling cards. When we cast our other Partner, we can search our library for the perished commander and cast it without paying commander tax!

We want to dig as deep as possible to find the essential pieces of our deck. Additionally, spells that can be cast from our graveyard provide virtual card advantage, as our strategy tends to encourage milling ourselves. These reasons make Flashback cards like Desperate Ravings or Deep Analysis very attractive additions. It’s also very useful when those cards exile cards from our graveyard, as is the case with Flash of Insight or Glimpse of Freedom.

A cool trick with instant-speed exile effects like these is that we can respond to the ability of Mirror of Fate by exiling the Mirror, itself, then return it into our library with its own ability. As exiling is part of cost, this interaction is very difficult to interrupt. This helps the deck work a little more consistently and protects its synergies.

Lastly, I want to mention Temporal Mastery. Since our goal is to empty our deck and just fill it with goodstuff, this card is a beast. If we shuffle it in to an empty library with Memory’s Journey, we just get an almost-free extra turn. Even better, the exile clause on the spell is almost a benefit, as we can just return it again with our Mirror! On top of our library, too!

Our ramp package isn’t really too different from other decks, although focus should be on ramp that produces creatures as well (but isn’t a creature, itself). Wolfwillow Haven or Growth Spasm are examples I found that are decent in effect and cost. Summer Bloom is another interesting ramp spell, as it allows us to play a load of lands in one turn. This is especially useful when Pako has exiled multiple lands for us (as he will certainly do), which would normally take a few turns to play.

For the choices of interaction, we need cards that adhere to the rules laid out before. Some examples:

I feel it’s always important to let interaction synergize with the things you want to do in your deck. That way, we never feel bad for using it as it helps us fulfill our goals as well as cripple our opponents.

Normally, I don’t like to pay a lot of attention to the lands in my deck, but for this one I’m making an exception: we’re lacking creatures to abuse with Reality Scramble. So, we’re playing as many manlands as we can get our hands on, or at least as many as is feasible in a three-color deck, which seems to be around eight.

There’re few cards as unique as Mirror of Fate. I hope we’ll get more in the future, though, as warping a deck around a unique effect is very thought-exercising, which I find fun. It even managed to warp the value commander Tasigur into something new and exciting.

For example, these 45 nonland cards in the deck don’t appear on the EDHREC main page:

Oath of Druids has won me most of my games. Fetching either of our threats AND filling our graveyard really is nothing to scoff at. Once you control a Mirror of Fate, the game is really yours to lose. Initially, I feared that the strategy would become stale very fast. However, the variation that Pako, Arcane Retriever and Haldan, Avid Arcanist more than makes up for that. It feels like the decks works in the following phases:

The first iteration of this deck was Sultai instead of Temur, helmed by Tasigur, the Golden Fang. Black has a lot of exiling cards, most prominent probably being Inverter of Truth. Exiling apparently plays into black’s ‘paying the ultimate price’ thing. The main reason I chose Pako and Haldan over Tasigur was that I just liked their play patterns better (it’s a tad more interactive). However, Tasigur is a serious contender for a Mirror of Fate deck.

“Build a Mirror of Fate deck helmed by Tasigur, the Golden Fang”

I am very keen to see what you can come up with. If you have any results you’d like to share, you can send it to me via twitter or reddit (@ellogeyen and /u/ellogeyen). I’m open to any comments and discussion regarding the content of the article, as well.

Next time, we’ll move mountains! See you then!