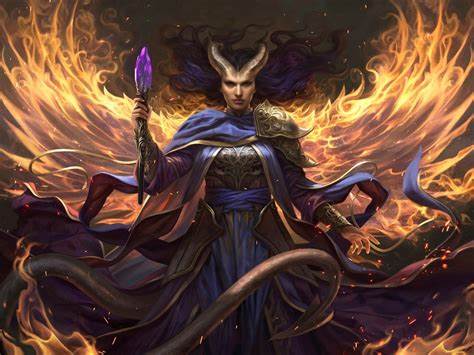 They See Me Rollin'

I won’t bury the lede here: I love the dice-rolling mechanics that Adventures in the Forgotten Realms brought us, but I think they missed the mark from a power-level perspective. Many of these cards ended up being underwhelming in Limited, let alone in Commander.

All that said, I don't think you should ignore these cards outright, at least not all of them. AFR and its subsequent Commander release brought us a bunch of dice-rolling cards, but only two commanders that care about dice: Vrondiss, Rage of Ancients, who can more or less be built without any dice-rolling synergy, and Farideh, Devil’s Chosen, who, albeit fun, is a little underwhelming.

Let’s Dive In and Look at Dice-Rolling Odds!

For many of these cards, it's important to consider the mean (average) for your rolls. Your first thought may be that half of 20 is 10, so the average on a d20 must be 10 right? Wrong, but that's a good thing. Since we cannot roll a 0, our odds are marginally better.

Two cards in particular will be great pickups if we do see an influx of dice-rolling cards this year. If you are familiar with Dungeons and Dragons, you are familiar with the concept of Advantage. Advantage allows the player to roll two dice as opposed to one and they may ignore the lower result. Pixie Guide and Barbarian Class translate this concept to Magic: the Gathering. Just how much do these cards make the math on these numbers better? Luckily, we are not the first nerds to ask this question! 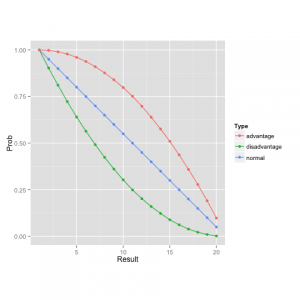 Having advantage is such a huge boon to the cards we're going to talk about today, and these two are cards to keep an eye on as we see new dice-rolling cards roll in. If a dedicated dice-rolling commander comes out, these are auto-includes, and this effect is one to keep your eyes out for as new cards roll in.

A few other cards seem like no-brainers for decks that can consistently roll dice. Brazen Dwarf reminds me of a Guttersnipe for dice-rolling decks. Feywild Trickster also seems like a solid token-creator for these decks. I hope to see more cards along these lines this year that reward you for playing the archetype. The added reward that these cards represent give players a reason to play dice-rolling cards that lack the consistency of other cards, but the reward for playing these cards has to be big enough to offset the downside of chance.

Aberrant Mind Sorcerer perhaps best sums up my gripe with many of these designs. A d20 has an average result of 10.5, meaning that we'll only get the better end of this deal slightly more than 50% of the time. Is the effect worth it? Absolutely not. Even with a good roll, this card is an over-costed Archaeomancer. That's the problem with most of these cards. Contact Other Plane is an over-costed Read the Bones unless you roll literally a natural 20. Swarming Goblins, even at its best, is still worse than Siege-Gang Commander. These cards aren’t exciting and don’t capture the tension that a game of Dungeons and Dragons would create. In these cases, the reward for playing these cards does not outweigh the costs.

The most exciting cards outclass their non-dice-rolling counterparts when you roll well. Luckily, the Commander decks delivered a few of these. Reckless Endeavor is a viable card even outside the dice-rolling strategy. This card can function as a board wipe, a ritual, or potentially both. These are the types of cards that I want to pair with dice-rolling synergy pieces. I'm not generally a fan of Blue Sun’s Zenith-type cards. Usually, I would prefer to run more efficient card draw, such as Chart a Course. Diviner’s Portent, however, has a lot going for it. It's instant-speed, which is huge for these mass draw effects. Second, you should not sleep on the scry X effect. Not only is this bonkers in an Eligeth, Crossroads Augur deck, but if you can see the top 5+ cards of your deck, that's insane value. Berserker's Frenzy gives you advantage on its own and can be cheaper and easier to cast Master Warcraft.

My favorite is Delina, Wild Mage. The coolest bit of text on this one is that the creature you copy can be legendary, meaning that you can copy your commander. This card can also go crazy with a little luck and can even go pseudo-infinite when paired with Pixie Guide. We need to see more unique dice-rolling effects like this. These make me excited to add dice-rolling to my deck. These cards have both a reasonable floor and a reward that outweighs the risk.

Let's take a look at the best dice-rolling options we have to date. Vrondiss, Rage of Ancients is the most powerful dice-rolling commander, but the average deck on EDHREC is only running 9 of these dice-rolling effects, and I would hazard to guess that that's due in large part to these cards being included in the pre-constructed deck. The only "true" dice-rolling commander at the moment is Farideh, Devil’s Chosen, so unfortunately in building the deck we do lose out on a few very cool white, black, and green options, so I'll include a few of the more interesting ones here:

Now check out the deck here! I added in some spellslinger synergy to tie the deck together.

Let me know what you think of dice-rolling in commander in the comments below! Do you love it? Hate it? Do you want to see more dice-rolling support in 2022? Are you excited for Commander Legends: Battle for Baldur’s Gate?? I sure am! I hope we see some new and improved dice-rolling commanders.