Solve the Equation - The Odds on Color-Hosers 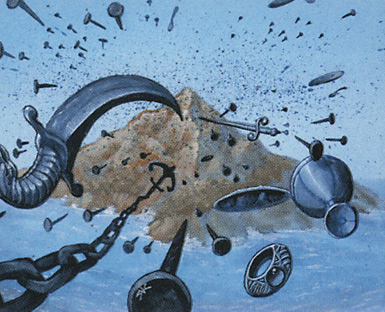 How to Lose Friends and Irritate People

In honor of the recent update of the salt scores, I wanted to take a look at a genre of cards that is sure to be salt-inducing to many of you out there: color-hosers. Color-hosers are cards that restrict or affect only cards of a given color, or in some cases lacking a given color.

The irritating effect of these cards comes down to two main factors. First and foremost, they often will have an asymmetrical effect on the playgroup, only affecting certain players.The second factor is the absolute brutal effect of some of these cards. Early Magic: the Gathering design was not considering the impact of long multiplayer games when they printed cards like Acid Rain.

However, all that said, I think these cards have a place in Commander and are often underplayed. I often forget these cards or ignore them because of the risk that they could be dead in my hand if no players are playing a certain color. I wanted to take a deeper dive to see what the odds were that these cards would have a target.

What are the Odds?

Sure, we can never predict exactly what commanders we'll come up against, but in order to best estimate the color combinations I could face, I turned to the top 100 commanders of the last 2 years.

Yes, I too was shocked to find that green was the only color that featured in less than 50% of the top EDHREC generals. However, the biggest takeaway is how high all these numbers are. If you randomly selected any top 100 commander, there is a ⅗ chance that it has black within its color identity.

That's just the odds of one commander being that color, but most of our commander games feature 3 opponents. Let's take a look at the odds that at least one of our three opponents will have a commander of any given color.

The odds that we run into a certain color are much higher than I would've guessed. That makes the “dead card” draws we risk by playing color-hosers are a lot less likely. The times they're dead are painful and definitely more memorable, but that doesn't mean we should write off these cards. There are plenty of steps we can take to mitigate the downsides.

No Card Left Behind!

We can mitigate the fail-case of these cards in many ways. First, sometimes our commander can give us extra benefit for casting spells, so even if the card doesn't achieve its intended goal, we still benefit. Deekah, Fractal Theorist and Talrand, Sky Summoner will create tokens no matter what our card does. However, if we do go this route, it's important we find cards that do not need a target: we cannot cast a spell that targets without a legal target. Blue Elemental Blast will occasionally be uncastable, but we can always cast Hibernation.

Second, we can use looting and rummaging effects to sculpt our hand and ditch dead cards. These cards have a very low opportunity cost, as many of them are powerful cards that already see substantial play. Faithless Looting, Frantic Search, and Thrill of Possibility already see play in over 10% of eligible decks. These cards will power up your deck whether or not you intend to ditch certain cards.

Third, not all color-hosers are created equal. Watch out for cards that can affect more than one color. Omen of Fire is absolutely brutal and will punish any control deck you come up against. Nature's Wrath will punish any Dimir opponents, and it fits great in an enchantment-based deck such as Sythis, Harvest's Hand. Other cards affect all colors but have a particularly backbreaking effect on some, such as Elephant Grass, another great inclusion for enchantment decks.

Other cards leave nothing to chance and allow us to pick a color to hate on. Wash Out, Teferi's Moat, and Dromar, the Banisher all give us the option to use them flexibly. Just remember, these cards affect you as well, which means Dromar might send itself back to your hand.

If our opponents don't have a certain land type, we can change that! Urborg, Tomb of Yawgmoth and the more recently printed Yavimaya, Cradle of Growth can help us leverage cards that care about our opponents' Swamps and Forests. Acid Rain all of a sudden becomes Armageddon, and Kormus Bell opens up all lands to a board wipe. Stern Judge can deal out a boatload of damage when paired with Urborg, Tomb of Yawgmoth.

What Did I Miss?

Turns out Marit Lage hates Izzet decks. Both Curse of Marit Lage and Wrath of Marit Lage can shut down blue and red decks respectively. Actually, a lot of cards hate Islands and blue permanents. I guess Wizards of the Coast realized pretty quickly what color was getting a little too much love. Blue mages, be on the lookout for Boil, Boiling Seas, Tsunami, and Choke to shut down your mana production while Magnetic Mountain takes care of your other permanents.

Not to be outdone, blue has a number of mana-restricting cards targeted at its enemy colors of red and green. Chill will slow down your aggro opponents, while Dream Tides will make sure your green opponent's biggest creatures can't hit you more than once.

The black and white portions of the color pie are also not fans of each other. Gloom will shut down any white deck, while Major Teroh can even sit in your command zone and come in just to blow out the players with black creatures. Perish, Nature's Ruin, and Virtue's Ruin are all color-based board wipes at black's disposal for a cut rate cost of just three mana.

I know much of this article has focused on the heavy hitters and cards with high salt scores, but there are plenty of less egregious cards that fall into the color-hoser category that shouldn't lose you any friends. Most of these cards are predicated on giving you a reward rather than punishing your opponent. For many playgroups this will be much more palatable.

Let me take a break from sharing cards that will get you kicked out of your playgroup to share a variety of cards with huge effects against the right opponent. Veil of Summer sees play in a variety of formats and fits right at home in Commander. It protects you against both blue and black, making it incredibly unlikely that this card misses. Regrowth sees play in 7% of eligible decks, while Reap sees less than 1%. Reap can have a much bigger effect and at instant speed with even an opponent with a few black permanents.

Carpet of Flowers is so dang efficient! For just a single mana, this card can create so much mana against decks with one of Magic's most popular colors. Once you have all that mana, you can use it on the cards that Insight and Compost can gain you. Your red decks can close out a game by pushing through damage against white decks with Havoc or against white and blue with Magistrate's Veto.

Don't count out a card just because it looks like it might be a dead card in some games. We aren't hesitant to include expensive bombs in our deck even though the'll be dead for most of the game. We can apply that same leniency to these cards. With smart deckbuilding, we can rely on the odds that we are likely to face at least one opponent playing the color our cards hate. Give some of these cards a second look, and remember to discuss with your playgroup before pulling out a deck that will blow up all their Islands.