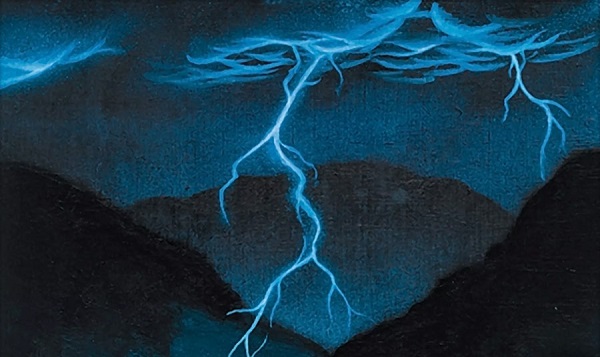 Welcome to Too-Specific Top 10, where if there isn’t a category to rank our pet card at the top of, we’ll just make one up! (Did you know that Inspired Ultimatum is the only Jeskai spell that can deal damage to any target?)

Burn is a tradition that dates back all the way to Alpha, but seems to have actually gotten worse over the years, rather than better. The reason? Put simply, it's what burn spells can and can't target.

Every burn spell from Alpha "does damage to one target". Excluding red's original board wipe, Earthquake there were only three of them: Disintegrate, Fireball, and Lightning Bolt. Nonetheless, the original burn archetype made no distinctions, phrasing its first cards in such a way that anything could be targeted, even card types that hadn't been invented yet. That mentality stuck around for a while for future burn effects. Legends brought us Chain Lightning, a sorcery-speed Lightning Bolt variant that could keep on copying itself for three damage to any target, along with Pyrotechnics, which raised the bar (and the mana cost) to let you divide four damage between any number of targets. Fallen Empires brought forward my favorite burn spell of all time, Goblin Grenade, which - you guessed it - deals five damage to any target for the low, low cost of a single mana and a single Goblin.

Then, Alliances introduced the phrase "target creature or player", a phrase that would stick around for most of Magic's history before the big errata shift in Dominaria back to "any target". To find just "target creature" on a burn spell, you have to go all the way to Mirage, where it's still in the minority, only appearing on Chaos Charm and Spitting Earth out of the five burn spells included in the set.

Fast forward to today, and it's a much different story for burn spells. Let's use Kamigawa: Neon Dynasty as an example, where there were five burn spells in the set. Of those, two have the words "any target" on them, the mythic Explosive Singularity and the three-mana Seismic Wave, which deals two damage to any target and another to each nonartifact creature a player controls. The other three feature "target creature or planeswalker", a step up from the Limited removal we've seen over the last couple years, but still nothing you can point at an opponent's dome to end a game. Looking at 2021 as a whole, 20 out of 32 burn spells targeted only creatures or planeswalkers, and of the 12 "any target" spells, only one deals more damage than its mana value.

In other words, if you're looking for the ultimate flexibility in your burn spells, you kind of have to go old school.

Top 10 Burn Spells That Can Hit Any Target

While there are still examples, such as the above, that do do damage to any target, the majority of them (especially those at lower rarities) are designed around Limited and are kept in check by a "target creature" wording. The ones that do let you target anything often ask for quite the cost for that added flexibility when it comes to mana, and so, we look to the past and remember the days when the possibilities for red mages seemed limitless (provided you weren't trying to draw cards, anyhow).

Criteria: Instants and sorceries that can deal damage to any target. As is tradition, all results are ordered by EDHREC score.

Why Fling when you can just keep the creature? Soul's Fire lets you do exactly that, making it a favorite of all sorts of hugely powered commanders, from Greven, Predator Captain to Inferno of the Star Mounts to Thromok the Insatiable.

Oh, and guess which other card is also a favorite of all those commanders? For one mana less than Soul's Fire, Fling still reigns supreme as the number one option for turning a huge creature into an instant-speed death sentence. Sure, it might not work in niche cases where Soul's Fire does, like Zada, Hedron Grinder, but it works well enough the majority of the time, and who wouldn't take the tradeoff of having to get rid of a creature to get rid of a player?

I'm told my initial Lorehold set review of red cards still sees traffic to this day for one reason and one reason only: this card's math is complicated as all get-out, and those that read it initially know there's a chart in there that helps out with it. I still stand by my initial review that Crackle with Power is often going to just be better than the previous "kill the whole table" red spell of choice, Jaya's Immolating Inferno, but I would forgive just about anyone for going with the simpler option rather than having to pull out a spreadsheet. As for all you new Hinata, Dawn-Crowned players out there trying to figure this out, I'll give you a hint: just drop one of the X's.

Prismari Command might just be my most favorite 'charm' of all time (although as a Pauper EDH player it's a close thing with Emerald Charm). All of its modes are imminently usable, it almost pays for itself with either a cost-reducer or a spell-copier, and I can move it between my "Removal" and "Card Draw" piles at will when I'm brewing. In short, you're never unhappy to draw it, and you often get to do what you want with it and then get a free effect on top of that. That's a deal that anyone would take, but especially in the middle of a Storm turn.

Speaking of deals anyone would take, how would you like to have access to Fling or a land at the same time? The Modal Dual-Facing Lands from Return to Return to Zendikar have made a lot of splash in the format, but I for one would take this one over all but the grand-daddy of them all, Bala Ged Recovery. Any deck that plays a creature with power that might get above 4 should be considering this land slot, and considering it heavily.

It turns out a lot of folks don't want to do Crackle with Power math.

Thing is, it's probably a lot more likely that Jaya's Immolating Inferno is an older card, well-established in a lot of decks, which by itself makes it more likely to be included in future decks or updates to the same brews. In other words, it has momentum. With only 2,000 inclusions between them, however, it will be interesting to see if Crackle with Power takes over, or remains just a bit behind the legendary sorcery that has name recognition going for it (both when it comes to people that know its name and having Jaya's name on it).

I was surprised to see that Electrodominance was making the cut over Jaya's famous Inferno. Sure, it's a two-for-one, but Immolating Inferno is a three-for-one. Sure, it's devastating if you copy it, but actually nowhere near as devastating as Inferno would be. To me, this is the classic Jenny/Johnny pitfall: you'd rather be drawing cards and doing things and having a fully operating engine going on all cylinders while your opponents look at their phones, instead of just winning the game.

Oh, and everything I just said about Jaya's Immolating Inferno? It's true of Crackle with Power, too.

In a world of Spellslinger finishers, one spell was King - except it was actually multiple spells! Despite Brain Freeze being the more popular option in many of the 60-card formats, Grapeshot is still usually the spell most think of when it comes to the Storm archetype. It's simpler, cleaner, and it will still probably win you a game even if it only goes for 'a lot' instead of going for infinite and killing the entire table outright. In other words, if you're an Izzet player and you're looping a bunch of cantrips over and over with no real end in sight, well, here's your win-con.

I had no idea when I started this list that I was just going to be doing a review of every red X finisher. That said, Comet Storm isn't really on that list as much any more. Don't get me wrong, if you do have 45 mana sitting around, it will absolutely do the job, but much more often, you're using this to take out a few key problems, something that folks are often reluctant to do with the likes of Crackle with Power and Jaya's Immolating Inferno (which isn't a card issue as much as it's a player issue, but it's still an issue).

Thankfully, our top card isn't so predictable as to be yet another X spell. No, it's instead the most famous red spell in the game! Lightning Bolt is the original Alpha powerhouse (well, at least of those that didn't make the Power Nine) and the most efficient burn spell ever printed. While for a long time it wasn't well represented in EDH, that has become less and less the case as the format becomes faster and faster. While it's probably not taking out many players like it has for a generation in 60-card formats, it's still going to remove a problem on the board for three mana, and has only become better at that as planeswalkers have become more plentiful. In other words, if you haven't already started seeing this classic around your tables, you might look at your red decks and see if you should be the one introducing folks to it.

I somewhat arbitrarily decided on just doing burn spells this week, as I've always been a fan of the genre, but there are a ton of effects out there that can do damage to any target, and spells are more near the bottom of that list than the top:

Top 10 "Damage to Any Target" Effects

In addition, there's another side to this coin that originally was a huge part of Magic, but was more or less abandoned with the advent of Maro's "New World Order" initiative: Damage Prevention. While we aren't seeing Samite Healer in every Core Set anymore (something I support and understand), it does make me a bit sad to see this staple mechanic of the game not at least popping up every once in a while at rare or mythic. As such:

Oof. A great sac outlet, and a couple cards that say "draw a card" on them for Feather, the Redeemed to abuse. It's not right, Wizards. It's not right.

Seeing how things have flipped over the history of Magic, I do wonder...

Finally, what is your favorite spell that can target well, anything? What's your red X spell of choice to finish out a game?

Let us know in the comments, and we'll see you at the briefcase folding table that's ready to go for any situation, anywhere.