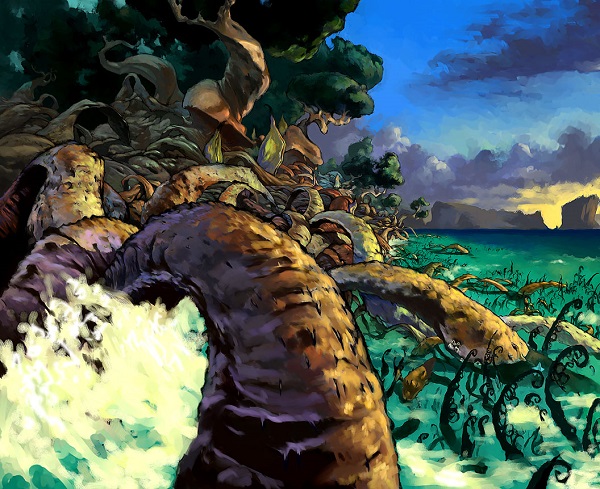 Welcome to Too-Specific Top 10, where if there isn’t a category to rank our pet card at the top of, we’ll just make one up! (Did you know that Nimbus Maze is the only dual land that looks at the basic land of the opposite color it's creating?)

There are many out there in Commander-land that feel that you have to have a full set of Shocks, Fetches, Checks, and various other $20 bills to have a "real" mana base.

And to them I say:

We all love you very much, and we want you to know you don't need to have a $400 mana base to play Commander. Sure, it's more consistent, and it's a flex, but we promise, you can get by just fine for pennies on the dollar. Whether you're playing two-color or five-color, there're lots of options that come into play untapped, will get you two colors of mana, and won't break the bank. Honestly, by attempting to throw a full set of shocks and duals in every single one of your decks, you're actively hurting the format by convincing players through your actions that they need to spend their entire life savings on dual lands, when that's not even close to the truth. This unhealthy relationship with having "perfect" mana creates a standard that hurts the community, hurts your pocket book, and most importantly, doesn't do as much for your deck as you think it does.

No, I think that about sums this one up, let's get started!

Criteria: Lands which make exactly two colors of mana which enter the battlefield untapped or have a conditional ability which may allow for them to enter untapped and a current price of less than one US Dollar. As is tradition, all results are ordered by EDHREC score, in this case rated by the highest ranked dual land in the cycle.

Okay, while I was right to say that there are a lot of playable duals out there for cheap... these are admittedly not those duals. They're not the worst option available for getting two colors of mana, but they're close.

WotC did play around with these Pause Lands for a while though, didn't they? Although to be fair, these Pause Lands in Kamigawa were printed as uncommons in the block immediately preceding Ravnica, which brought us probably the most playable cycle of uncommon duals ever made: Bounce Lands. So let us praise the Kamigawa Pause Lands for being bad enough that Wizards felt they needed to up the ante in the next set. (Also, if you're interested in the best of the best tap dual lands, we did that already!)

Ancient Ampitheater is actually part of a full cycle! Thing is... it's the only cheap one in it.

Still, if you're in Giant tribal, or even the odd Changeling tribal strategy, I guess you can't beat Ancient Ampitheater for some cheap access to Boros mana!

Calling the Storage Lands "duals" might be a bit of a stretch, honestly. With that said, they are severely underplayed in two-color decks, where you can afford to have a colorless land come down and begin storing for the long haul. What really intrigues me is the lack of play these see in decks that have counter synergies, like Proliferate. Sure, they're a bit slow to start, but if you're already putting down two to three counters on all your stuff each turn, that's gonna add up pretty quick. I mean, you're already playing Everflowing Chalice and Astral Cornucopia, so why not throw a land in there as well?

While it was great to see a fresh cycle of Innistrad lands that were immediately completed in Crimson Vow, we also have land cycles on the other end of the spectrum, as is the case with Nimbus Maze. Originally printed in Future Sight, we've not seen even a single other version of this land, despite it having quite a few fans. Perhaps it was too complex. Perhaps it was too good. Either way, if you're in blue and white, you can snag a Forgotten Realms version of this for cheap, and you'd be silly not to.

Also just reprinted in the Forgotten Realms Commander decks, the Show Duals are sure to make you smile in your opening hand. While they're really only solid options in two- to three-color decks (unless you're already playing a bunch of duals with basic land types), they do a solid job in that niche, rarely coming down tapped except in the late game if your hand is strapped.

Going back to Nimbus Maze, and cycles that need to get finished but probably never will be, it's the Manaless Filters! Originally printed in Odyssey, long before what we now think of as the traditional filters, these operate in the exact same fashion as the Signets, only on a land. That does come with the significant downside of not being able to tap for any mana by themselves on turn one, but once you've got another source of mana, they'll be online and ready to make your mana math just a tiny bit harder!

This is, of course, the reason they were replaced with the Shadowmoor and Eventide filters, which don't have any of the associated downsides, like not creating their own mana, or making math difficult.

There is, of course, a bonus to the Manaless Filters that doesn't get brought up much: unlike the Shadowmoor cycle, these don't need access to their own color of mana to be activated, and can be used with generic mana instead. That might not seem like much, but in four- and five-color decks, it can definitely be the difference between having access to the two colors on the dual and... not.

If you are more limited in your color spectrum, however, then black/x decks absolutely love the Tainted cycle. While they're more solid in decks that contain a high ratio of black cards and Swamps, they still create colorless mana when they're "offline", still enter untapped, and they don't usually have to wait too long, since it's easy to eventually find a Swamp in most two- or three-color decks. In other words, if you're in black, these are a no-brainer.

Fresh off the cycle completed in Crimson Vow, it's the Battle Lands!

All joking aside, there's a big difference between the original Battle Lands and the newer "battle-land-esque" versions seen in Midnight Hunt and Crimson Vow (what are we calling those? Innistrad lands? Slow Lands?) These lands have dual types, which is important, but they do have a restriction that probably makes the hot new Innistrad duals look better, and that will probably even result in these original Battle lands falling further in price - and four of the cards in this cycle are already under a dollar! Just keep in mind that they're better in two-color decks that have a bit more room for basics, and you'll be saving money in no time!

Finally, we have the creme de la creme. The original non-original duals: the Pain Lands!

Okay, maybe the original versions were the allied pain lands, and maybe they're over a dollar. Still, there's a lot of ground covered by these enemy versions, and they even got a boost with the advent of colorless mana! While they may be a bit hard on your life total, they're not at all hard on your pocketbook, and that's what matters.

While a dollar is obviously the gold standard for budget cards (in the US, at least), there are still quite a few duals out there that are still great and are a lot cheaper than your average "optimum" mana base.

At the $5 benchmark, we start to see the Check Lands enter the running, although it must be noted that only half of the cycle actually is under $5. The rest is more or less filled in by, notably, the enemy pain lands we saw at the top of the "Under a Dollar" standings.

At the $10 mark we start to see the Shocks in less-played colors, with only three available for under a Hamilton. The rest of the Top-10-Under-10 is more or less filled out with the full cycle of Check Lands, with the exception of the most-played Pain Land, Yavaimaya Coast.

Finally, these are the most-played expensive lands out there. Fetches rule the day, although Ancient Tomb and a few Shocks sliding in isn't exactly a surprise.

What Do You Think

Finally, what are your favorite budget duals? Were they on this list, or do you like to slow down and smell the tap-lands?

Let us know in the comments, and we'll see you at the tables they quickly slapped two colors of paint on at the LGS so they could easily direct people.