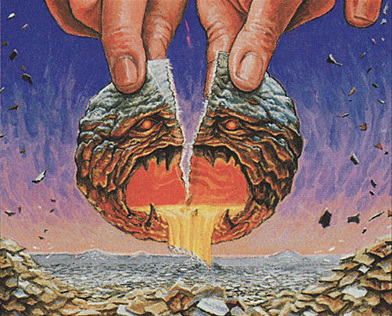 Turn That Smile Upside Down

Welcome to Too-Specific Top 10, where if there isn't a category to rank our pet card at the top of, we'll just make one up! (Did you know the card to elicit the loudest groan from a table of Storm decks is Rhystic Study?)

This time through, we're flipping the script, taking a look at some of the worst cards in Commander. Since it's currently spoiler season for Commander 2019, let's make things more specific, and look at just the least-played cards that originated from Commander precons!

As per usual, rankings are determined solely by the cards' EDHREC score, which is based on how many decks are playing the particular card. In this case, we're going to be judging cards exclusively printed for Commander, rather than looking at the cards that were just reprinted into the Commander product. (It is worth noting, however, that being reprinted after the fact is not only fine, it's probably a sign that the card is fairly decent after all!)

So without further ado, let's look at the least played Commander cards in Commander.

Attack the archenemy they said. It'll be unblockable, they said. Only... is that enough for a five-mana 4/4 to be playable? Alas, much like my old friend Savannah Lions, this one just can't keep up in today's power creep environment, especially when the unblockable ability isn't concrete, but rather fastened onto a large caveat. While it may be that you've built your deck so that you aren't going to be the player with the most creatures, that doesn't guarantee that the person you actually need to attack will be, either.

Back in the day, I used to absolutely love the 'hidden' cycle from Urza's Saga. Tired of that opponent playing Counterspells? Try Hidden Gibbons! Want to go faster than that guy playing Grim Monolith? Try Hidden Guerrillas! Awaken the Sky Tyrant fills much the same ultra-fast aggro reactionary role, but in Commander that role isn't very good. Even if there was a four-mana 5/5 flyer available without any additional requirements, it seems doubtful that it would see much play in this slower environment, so it's not too surprising that this would-be Dragon is sitting on the sidelines.

In a similar vein, Naya Soulbeast might be a huge trampler for your board... and then again, it might not. In either case, however, for eight mana you're going to want a spell that wins the game, not a vanilla creature that will probably take a few turns to swing in and die incidentally in the meantime. Not having a relevant ability to the board is just not good enough these days, even at lower power levels. The fact that this particular Beast might just be an eight-mana 2/2 makes this card a terrible option for any deck.

I'm more sympathetic to our number four card, Fell Shepherd. In the older days of Commander, this card even saw decent amounts of play, having a relevant triggered ability that synergized with its sacrifice outlet. That and the fact that the sacrifice outlet powers removal to keep the Shepherd unblocked, and this thing should be knocking it out of the park. There's just one problem: it costs seven mana to get out, and then additional mana for each time you sacrifice a creature. There's a lot of possible upside here, but it's unfortunately locked up by needing a lot of resources to get there.

Four toughness isn't a lot in a game of EDH. Only counting commanders, much less other creature staples of the format, there are 377 legendary creatures who can block Terra Ravager and kill it. Of those, about a tenth of them have some sort of indestructible or Regenerate ability, making the likelihood of an even trade much less than a guarantee. Perhaps if the boost the Ravager gets from your opponents' lands was around for blocking or for toughness as well, this might be a bit more of a threat. However, as is, without any sort of evasion and with a high likelihood that this will swing once and die for its trouble, Terra Ravager is yet another creature in a long line of fairly vanilla creatures that just aren't making the cut.

At number six on the list, this is the first in our Top 10 to actually have me a bit confused by its presence. Don't get me wrong, Widespread Panic is a weird card that doesn't quite fit in discard or chaos decks, but it doesn't quite not fit either. Add in that it hoses tutors that put cards on top of the deck and acts as an unending Plow Under for a deck built around on-board abilities rather than new spells, and it really seems like a place should have been found for this enchantment. In particular, for those decks that thrive on self-mill or exiling the top card of the library, this seems like a unique weapon that could be deadly with the right setup. Honestly, I think that some red commanders that care about the top of the library need to step up and start playing this card. Looking at you, Melek, Izzet Paragon, Borborygmos Enraged, and Vaevictis Asmadi, the Dire. Maybe throw some Soldier of Fortune in there too.

One of the nice things about a "worst of" list is that the cards get better as you go. Now, Empyrial Storm is far from a slam dunk, but it is still a decent card. One 4/4 Angel for six mana is a terrible deal. Two is probably all right, but not exactly ideal. Once you start getting three or more, however, this could actually pack quite the punch. So the question is, what cheap commander cares about tokens and gets cast repeatedly? Might I introduce you to Saffi Eriksdotter? How about Rhys the Redeemed or Thalia, Guardian of Thraben? (PS: if you have Partner commanders, this triggers for each of them!)

While the price could be better, Eye of Doom's effect can actually be a real boon for the table. Being able to destroy the four best permanents on the board can really level the playing field; the only question is whether it will change it in your favor. Especially if you are doing well, Eye of Doom might backfire and one or more of your nonland permanents as opposed to your opponents'. Still, in the right political deck, it could just work out.

Initially it would appear that we're in another slump here, but it's worth pointing out that the worst version of Shared Trauma says "pay X+1 mana to have each player mill the top X cards of their library." That effect alone isn't unplayable for the mill strategy, and might even be playable in several decks that are just interested in filling their graveyard. Unfortunately, there are probably better options for both the mill and self-mill decks, namely Mind Grind and Dread Summons.

You probably play this if you're in the Squirrel deck, because as we've gone over before here on Too-Specific Top 10, there are only 14 cards relating to Squirrels total in the history of Magic. That said, it's still going to be rather underwhelming for you, as you'll probably just be using it to make one Squirrel a turn, sometimes also losing a life in the process, all for much more mana than Squirrel Nest.

And finally, which cards do you remember from the Commander products that really just underwhelmed you? What kinds of cards used to make the cut for your decks but aren't pulling their own weight anymore?

Let us know in the comments, and we'll see you at the Bad Rare Blackjack table soon!