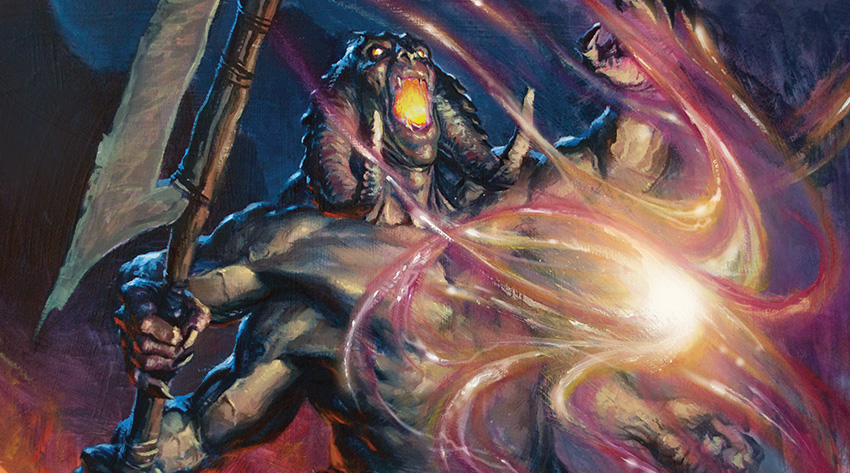 Please Stick to the Low-CMC Spells That You're Used To...

Welcome to Too-Specific Top 10, where if there isn’t a category to rank our pet card at the top of, we’ll just make one up! (Did you know that Throes of Chaos is the only non-creature, non-land card with only two words of rules text?)

There are only four cards which Cascade for less than four mana, three of which are out of Alara Reborn and are rather underwhelming, along with Shardless Agent, a specific print out of Planechase 2012 that was pushed a little harder outside of the Standard environment.

Outside of that, every card printed with Cascade on it costs four or more mana. Even among the new Commander Legends cards that care about Cascade, Averna, the Chaos Bloom costs less than four, but doesn't actually Cascade, and Imoti, Celebrant of Bounty is five mana, itself, while giving your spells that cost six or more Cascade.

This means that, much like the old Yidris, Maelstrom Wielder and Maelstrom Wanderer Cascade decks, the new commanders are still very open to combo lines where you can design what cards you Cascade into through deck construction. Taking a moment to peruse EDHREC's Combo page for Temur options, there are over 100 various infinite mana, damage, or life combos involving only cards that cost under three mana.

Are most of those the same cards more or less doing similar things with different various Walking Atlas effects? Absolutely. The point is, however, that you can easily construct a deck that grabs a piece of your combo every single time you Cascade, simply by filling the rest of the deck that isn't Cascade cards or combo pieces with spells that cost a lot of mana.

Just because spells have a high converted mana cost doesn't mean they'll be difficult to cast, however.

There are more mechanics in Magic: The Gathering than you can count on your fingers that can ultimately result in spells costing less than their overall converted mana cost, meaning that there are hundreds of cards that technically cost a lot of mana but can be cast for a lot less. Ultimately, this means that you can rather easily put together a deck comprised of nothing but these "expensive" spells, allowing you to be a degenerate combo junkie at will!

But what are the most popular cards that technically cost more? Well, let's take a look at our criteria and find out!

This leaves out a couple corner cases like Adventure and Cycling that you may be interested in for a Cascade combo build, but ultimately will get you more or less where you need to be to avoid running into your "irrelevant" spells that do pesky things like have power and toughness, draw cards, or remove threats as opposed to outright just winning the game.

Timetwister it isn't, but in a Cascade deck Echo of Eons may actually be even better. If you can manage to get it into the graveyard, it will cost the same as the legendary Alpha staple for the same effect, while being neatly sidestepped by all but your largest Cascade effects. Or you could always just cast it twice, which isn't a bad deal, either!

Since your combo will not only need to be protected from the vagaries of the average Commander table, but will inherently be made of cheap pieces as well, Devastation Tide is one of the best "expensive" board wipes you could ever ask for. While Miracle may interfere with the plans you may have had for your turn, generally plans that end in "I win after casting a couple two-/three-ana spells" can accommodate paying two to get rid of basically every threat at the table. And if they can't, then you get to hold it and cast for five later, which isn't exactly a bad option, either!

Ghalta, Primal Hunger doesn't fit as well into a combo plan for the most part, but if you're going more the value route, then having a 12/12 with trample around is never a bad thing. Neither is having a back-up plan to your combo, and as back-ups go, two-mana 12/12s aren't a bad deal.

While four mana is definitely the danger zone as far as accidentally Cascading into cards that aren't your actual combo, you'd be hard-pressed to find a time in most Commander games where Force of Vigor wasn't a relevant piece of removal. That goes double for having it in your hand as you're attempting to combo off, in which case it can remove all sorts of possible hindrances to you winning the game, often both at instant speed and without having to pay any mana.

While it doesn't have the game-warping power of Devastation Tide, nor the bonus graveyard removal of Echo of Eons, Reforge the Soul is nonetheless one of the best wheels that money can buy. Two mana to get seven cards is an almost-unheard-of rate, even given that your opponents get the cards as well. Still, between the five mana converted mana cost and the fact that it may give a higher-power table access to Counterspells they wouldn't have had otherwise, Reforge the Soul may not actually be the smartest option when it comes to Cascade combo builds unless it has a high amount of synergy with the deck as a whole (which is honestly true of wheels in general).

On the surface, The Great Henge seems like it might fit better in the value Cascade build which also includes Ghalta, Primal Hunger, and I think that's correct. That doesn't mean that this overpowered green staple isn't also good enough to go in the combo deck, however. Most of your Cascade effects are stapled to creatures, and them drawing a card as well as playing another as they enter the battlefield is nothing to sneer at, nor is an extra two mana and life every turn. Heck, the least relevant portion of this card is the free +1/+1 counters, and that could still very well end up being an incidental combo piece with Persist cards like Kitchen Finks or Murderous Redcap that may already be part of your combo.

No matter the type of Cascade deck, however, the ability to grab a couple extra cards will never not be a good option. Dig Through Time provides that option in spades, almost always for a measly two mana. While Delve doesn't synergize the best with decks that care about their graveyards, that's rarely a problem with Cascade cast triggers as opposed to enter-the-battlefield triggers, so by-and-large this will be a cheap win for you that will dig deep for an answer at instant speed, or that will just find you your next Cascade-enabler if you get stalled. Or both!

That said, sorcery speed is a small price to pay for an extra card at one less mana! Treasure Cruise is fair Ancestral Recall, which still makes it... not that fair. In short, a Cascade combo deck has this as an auto-include no matter what, happily thumbing by it when getting their combo pieces, or drawing into it along the way to provide some card advantage.

If you're ever looking for solid evidence that people like to dream a bit with their online decklists, look no further than Force of Will. I don't know about you, but I see a lot of blue decks around the tables I frequent, and nowhere near 11% of them are playing this 100-dollar bill. Competitive EDH probably skews things a bit here as well, but I know that I also put a lot of expensive cards I have no intention of actually buying in the initial draft of my decklists, and I doubt I'm alone in that.

As for Force of Will, itself, it's iconic and powerful, and technically costs five mana. That means that if you're looking to make the kind of high-powered combo Cascade deck that we're theorizing about here, then this particular Benjamin of a Counterspell is a must-have to assist you in landing your crucial cards. Just be wary that your more expensive Cascade effects will find it as well in embarrassing "either counter your own spell or don't cast it at all" fashion, so plan accordingly!

As previously mentioned with Devastation Tide, board wipes can be an absolute necessity for putting your combo down on a simpler, safer board. While Blasphemous Act only takes care of the creature part of that equation, doing so for a single mana (as it often will) is still a great deal. Combine that with being able to do it on your own time, and it dodging all but one Cascade card in the game, and this is a must-have for every combo Cascade deck... the same way it is for just about any deck that plays red.

I feel that I came about my three-mana restriction in relatively logical fashion; however, that doesn't change the fact that often folks will be looking for a quicker, easier combo that may cost a bit more, or they may want to play more of the expensive Cascade cards to really make sure they can dig deep whenever they want to. Combine all that with my love of crafting ever more lists, and I figured why not use this week's Honorable Mentions to give brewers options at every CMC?

There always seems to be a bit of interest in how these lists are made (this seems like a good time to stress once again that they are based on EDHREC score, NOT my personal opinion…), and people are often surprised that I’m not using any special data or .json from EDHREC, but rather just muddling my way through with some Scryfall knowledge! For your enjoyment/research, here is this week’s Scryfall search.

Often, I find myself putting together lists that I'm a big fan of the premise of, but really have no interest in the meta that it will be most relevant to. With that in mind, I am interested in how people feel about decks like Cascade combo that are inherently designed to do pretty much the same thing in every game.

And finally, how do you like the new love for Cascade out of Commander Legends? Are you thinking about putting a deck together because of it? Are you going to build it as value or as combo? What's your combo?

Let us know in the comments, and we'll see you at the table-in-a-briefcase that seats eight but folds up small enough to fit into a Honda Civic's trunk.