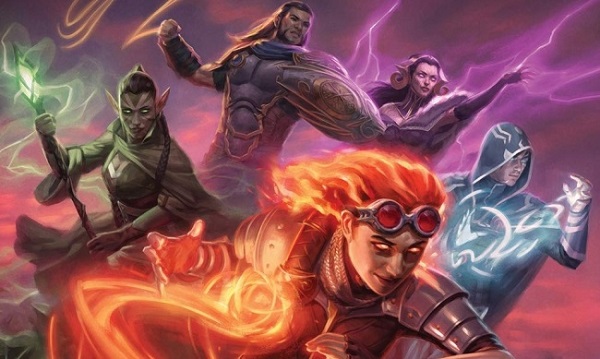 (Rise of the Gatewatch | Art by Kieran Yanner)

Who Watches the Gatewatch?

Welcome to Too-Specific Top 10, where if there isn’t a category to rank our pet card at the top of, we’ll just make one up! (Did you know that Chandra, Awakened Inferno is the only Gatewatch member to give an opponent an emblem?)

The MTG Wiki defines the Gatewatch as:

Gatewatch (n.) a group of planeswalkers initially allied together to fight the Eldrazi on Zendikar. Named for their defense of Sea Gate. Their commitment is to protect the people of the Multiverse from threats that no one else can handle. From Battle for Zendikar up till War of the Spark, the Gatewatch became the center of Magic's storyline.

This got me thinking: who were the most powerful members during their times with the Gatewatch?

Now, it would be easy to say "Teferi" and be done with it. He is a time mage, after all. Then again, that smacks a bit of "let's see if you can do your trick before I can do mine" when it comes to Jace and Teferi going head-to-head.

Comic superhero infighting aside, we do actually have some information we can use to see who's the most powerful Gatewatch member: their cards! This sounds easy, let's just look up the most-played planeswalker cards from among the characters that have been in the Gatewatch.

Oh. Hm. I think I'm starting to see a problem here. Liliana, Dreadhorde General sees a lot of play, to be sure, and Liliana's been in the Gatewatch, but she was decidedly not part of the Gatewatch while commanding Nicol Bolas's immortal horde. To a lesser extent, we see the same issue with pre-Gatewatch versions of Jace and Nissa in Nissa, Vastwood Seer and Jace, the Mind Sculptor.

So, with the constantly in-flux nature of the Gatewatch and its members being more or less powerful when they're in and out of it, we'd better find a way to restrict this to just canon. And by "find a way", I of course mean "just take all the sets where a specific planeswalker wasn't necessarily in the Gatewatch and omit them." That should do it!

Criteria: Planeswalker cards that were part of the Gatewatch in canon at the time of their card being initially printed, not including the pick-and-choose canon of Core Sets. As is tradition, all results are ordered by EDHREC score.

Before the recent printing of Niko Aris (who's sure to join the Gatewatch any day now, I'd bet), Nissa, Steward of Elements was the only planeswalker with an X in their mana cost. The difference is, Nissa also has an ultimate, unlike Niko. It's not an instant game-winner, but two 5/5s with haste and flying can still win a lot of games. Even at a loyalty of one, which is probably how Nissa gets cast the most, she gains loyalty quite quickly with her +2 to scry 2. Her zero loyalty ability is also quite relevant, immediately finding one-drops and lands off the top a la the selective green cantrips we've come to know and love recently. It also gets better as she cranks up by two every turn, grabbing more and more expensive creatures off the top.

All in all, this version of Nissa is solid. After all, I can't immediately think of another three-mana Simic planeswalker that adds two loyalty a turn that was in any way a problem. Still, I have a hunch that maybe some of her mono-green versions might see a tad more play.

Five mana to return a creature from your graveyard to the battlefield is not the best rate that money can buy, but given that it's strapped to a planeswalker that can accrue you a lot more value if it sticks around, you're not unhappy with it, either. What impresses me more, however, is Liliana, Death's Majesty's +1 ability. Creating a Zombie is obviously not anything to write home about, although it does help protect Liliana. For the decks utilizing their graveyard, however, getting a Zombie and milling two is a lot like getting three cards. That's also on-rate at five mana in addition to Liliana's -3, a rarity when it comes to planeswalkers. Combine that with an ultimate that wipes the board but might leave you with a bunch of Zombies, and Liliana, Death's Majesty is about as easy a win for Reanimator decks as you're likely to see.

Speaking of planeswalkers that fit a niche perfectly and protect themselves while they're doing it, Nissa, Voice of Zendikar! Unlike Liliana, Death's Majesty, you're not exactly happy paying three mana to make a 0/1 Plant if that's all you get to do. However, at three mana, Nissa comes down early enough that four loyalty and a blocker is more than likely to be enough to keep her alive, so you're more than happy to pay three mana to keep on making a Plant token every turn. The late game is what you're really playing Nissa for, especially in your +1/+1 counter or go-wide decks, as she can immediately come down and put dozens of +1/+1 counters on your board, often making for a lethal alpha strike opportunity. Even if all you do is sit back and make Plants all day with her, though, that's not half bad. It's actually not hard to sit behind a wall of tokens and ulting her for seven or eight life and cards, which will definitely swing a game your way.

If you're playing Azorius instead of green, however, Teferi, Hero of Dominaria should improve your day somewhat. His +1 ability allows you to both attempt to draw into a Counterspell and hold up the mana to play it. His -3 often reads as better than a Generous Gift, and his ultimate definitely fits into the category of "basically wins the game". Speaking of which, that ultimate is reachable with either a Doubling Season or a Deepglow Skate, making this Teferi a lethal threat in your average Superfriends deck.

Speaking of Superfriends phenoms, Ajani, the Greathearted slots right in. A lot of people probably know him better for his go-wide and +1/+1 counter synergies, but let me tell you a secret: Superfriends decks that play green and white are also go-wide decks. With the number of Soldier, Wolf, Beast, and Plant tokens you can lay down with Selesnya planeswalkers, they're typically the non-ultimate win-con of your average Atraxa 'walker build. Vigilance also keeps all of your planeswalkers alive while you're alpha striking with your army of tokens every turn, and between Ajani's +1 ability and the life you save when opponents attack your walkers instead of your face, your life total is sure to get out of hand fast.

Five mana for a 5/5? I would say that checks out, but it's been a while since I've seen anyone plop down a Living Terrain. Similarly, you wouldn't be happy paying five mana for a Regrowth, so why are so many people playing Nissa, Vital Force?

Because they're doing exactly what we're told not to do with planeswalkers: they're playing her for her ultimate. Since she ults after just one turn, though, that's a pretty good reason. A word to the wise: if you ever see a Nissa, Vital Force come down and someone at the table doesn't say, "Hey, she's gonna ult next turn if we don't do something about it", then you need to be the one to say it. While you will see her -3 used in a pinch if there's an important card in the player's graveyard, 99% of the time the player will plop her down nonchalantly, wave away her +1 as if it does nothing at all, and attempt to pass without anyone noticing. If that ultimate resolves, it's essentially game over when a lands deck has a permanent Tatyova emblem.

I've gushed at length about my belief that Chandra, Torch of Defiance is the best Outpost Siege variant, so I'll try not to go too deeply into how good her +1 ability is. Unless we're talking about her other +1, that is, in which case it's a Sisay's Ring for red mana that can also draw you cards, act as removal, and be an absolute gamewinner if it goes untouched for three turns. Chandra, Torch of Defiance is probably the most versatile planeswalker that's ever been printed, and it's not close.

Most versatile doesn't mean most-played, however, as evidenced by '3feri' appearing in more decks despite being in a much more restrictive color identity. That's right, despite the $15 price tag, just shy of 10% of all blue-white-inclusive decks are packing Teferi, Time Raveler to speed up their spells while slowing down everyone else's. Either that or they're using his ludicrous three-mana-for-four-loyalty stats to keep him alive after a -3 while removing the biggest problem on the board, even if it's just for one turn. Either way, there's no doubting that this is the best Azorius planeswalker, bar none (and I still think he could kick the rest of the Gatewatch's butts, too).

2. Nissa, Who Shakes the World

Canon-wise, I'm not sure I've ever understood quite why Nissa is so powerful. Something about leylines and reaching out to the planes and what have you. When they were translating it to cards, however, they couldn't have conveyed it better than they did with Nissa, Who Shakes the World. Starting with a five-mana Heartbeat of Spring that only affects you is good enough already, but then you can immediately start making your lands into creatures as well. Combine all that with an ult that's immediately reached with a Doubling Season and that grabs every Forest in your deck, and it's not exactly a wonder that this Nissa is our #2. Honestly, I can't even imagine how she's not #1!

Oh. Right. Nissa is #2 because Jace's time in the Gatewatch inspired him, for some reason, to mimic a Laboratory Maniac.

Sigh. I get it. Games gotta end. However, might I introduce you folks to the mono-blue filter over at Commander Spellbook?

Because this is a limited list overall, and the concept of Planeswalker Deck planeswalkers makes me chuckle, let's just go ahead and finish this week's list out, shall we?

Man, remember when Gideon of the Trials was the most amazing card ever? That reminds me, I need to put a copy in my Group Hug now that he's only $4.00. If you'll excuse me....

While they were a meme for quite some time, since the defeat of Bolas the Gatewatch has had much less importance to the Magic storyline. With that in mind...

Finally, who is your favorite Gatewatch member? Did they get that way because of story, or because of one of their cards?

Let us know in the comments, and we'll see you at our weekly meetup at Dave's house, for those of you who are part of the playgroup. Bring snacks.