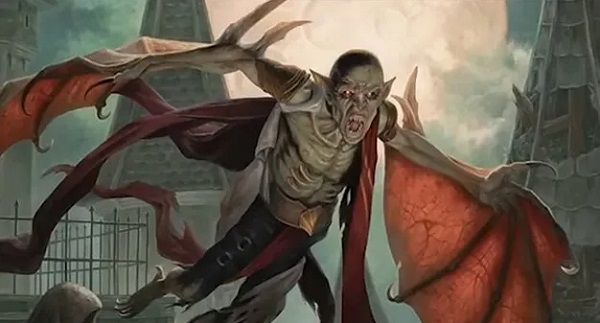 Welcome to Too-Specific Top 10, where if there isn’t a category to rank our pet card at the top of, we’ll just make one up! (Did you know that Underworld Coinsmith is the only card with an activated ability that allows you to pay life to have your opponents lose life?)

If you're a Vampire Nighthawk fan, do I have news for you! Now you can play it in the command zone!

There's no shortage of cards in the history of Magic with abilities you pay life to activate. Even among the most basic building blocks of the game, paying life has become a ho-hum endeavor that we barely pay attention to.

Top 10 Orzhov Lands You Pay Life To Use

So wouldn't it be great if the most commonplace life loss could now ramp you? While many people are undoubtedly excited about copying Tavern Swindler's coin flip ability with Verrak to make sure that they stay ahead on life, what pretty much anyone who looks into this legendary Vampire will find out in short order is that he can be by far the best Orzhov ramp card that's ever been printed. Sure, he doesn't allow you to copy mana abilities of things like Mana Confluence or Spire of Industry, but he does let you copy something else: fetches.

The only problem? Not everyone likes fetches. Don't get me wrong: off-color fetch lands are legal to play and operate correctly within the color identity ruleset, keeping in mind that only seven of the ten fetches will have a Swamp or Plains to grab. However, a ton of players are uncomfortable with playing off-color fetches, feeling that they don't fit the spirit of the color identity rules (a sentiment the Rules Committee agrees with, by the way), not to mention them being $40 apiece.

What does that mean from a list standpoint? That between fetch lands more or less automatically being the top ten slots and the controversy, we're just going to once again sidestep the entire lands issue in our criteria:

Criteria: Nonland cards within the Orzhov color identity that have a non-mana activated ability that either requires or allows you to pay life as part of the activation of that ability, but in which that is not the only requirement. As is tradition, all results are ordered by EDHREC score.

Some of you might be wondering about that "only requirement" requirement, and let me tell you: its reason is a sneaky one that might surprise a lot of you. You see, there is a trap in Verrak's design that not everyone will see when they first start dumping every card that has "pay X life" on it into a deckbuilder: if the paying of the life is the only activation cost, then Verrak doesn't do anything.

To explain, let's take a look at Aetherflux Reservoir, imagining that we had 101 life. That means that we could easily pay 50 life to nuke someone off the table, and then excitedly pay 50 life again to copy the ability with Verrak! Thing is, we could already do that. Heck, in response to our first activation of Necropotence, we can stack twenty more instances of it on top before we ever take a look at the first card, all without Verrak. The same is true for Doom Whisperer, Unspeakable Symbol, Wall of Blood, and every other card that has paying life as its only requirement. In other words, don't play any of these cards unless you'd already be playing them without Verrak, and we won't be including them in our list.

If you're brewing a more aggro build of Verrak, then Bloodtracker is a pretty natural inclusion. While this fellow Vampire is a bit pricey up front, it's fairly easy to plop it down and then spend a turn doing nothing but stacking counters on it to have it pay off as either a finisher or a card draw engine. I don't think that will be the popular build of Verrak, but it will be a build that's out there. If you do decide to play with life totals or gaining life a bit more than combat, however, I'm not sure that I love Bloodtracker as an option there.

No matter your build of Verrak, you're always going to be happy to see Underworld Connections. While normally it's considered to be a bit inferior to Phyrexian Arena, given that you need to "spend" a mana to use it, it's not an open-and-shut case because you do get to draw a card immediately if you have an extra untapped land sitting around. Combine that with it suddenly becoming two cards with Verrak, and now you're (re)opening the conversation about whether or not this might be better than Sign in Blood!

The general consensus on Erebos, God of the Dead is that it's bad Greed, but those that have reached that consensus have never had this randomly cast against their lifegain deck. Being an indestructible not-always-creature enchantment, Erebos is very difficult to remove, and he can incidentally shut entire decks down. All of which might be worth paying the extra mana, especially since Verrak decks probably play both anyhow!

Trading Post, on the other hand, I'm not so sold on. Even outside of Verrak decks, I've been seeing less and less of this card, really only seeing it these days in slower artifact builds, so unless you're building Verrak as an artifact commander, you're probably better off leaving this five-mana Goat-maker in the Maybeboard.

At first, I thought that I'd also dismiss Razaketh, the Foulblooded out of hand. At eight mana, Razaketh is usually reserved for Reanimator builds. As we already covered, though, Verrak is actually one of the easier Orzhov decks to get to eight mana with, and if you can get to eight, Razaketh is a house of a repeatable Demonic Tutor that should absolutely win you any game it remains in, even before you end up copying the ability.

Erebos might be better at sticking around and incidentally hosing random decks, but if anything, many players take that as more of a reason to play Greed. Letting a deck do its thing is much more likely to get you smiles at a table, but is also less likely to have people removing your draw outlet in the first place. Combine that with the activations being cheaper, and it's definitely a question of whether you play all three of Erebos, Greed, and Arguel's Blood Fast, rather than whether you play Greed.

Man, this Top Ten really wants us to play a Verrak artifact deck, doesn't it? Let's take a look at the feasibility:

The end of that list starts getting pretty thin, pretty quick. While I'm all for a brewing challenge, I'm not sure that even if you wanted to build a Verrak artifact deck that you'd want Mystic Forge in it. The whole idea of the exile ability is just get the top card off of the library so you can look at the next card. Exiling an extra card doesn't really do anything for you, and you'd struggle to get enough other relevant artifacts that didn't work with Verrak, which makes this pretty much a non-starter.

Yawgmoth, Thran Physician works a bit better than Mystic Forge in the average build of Verrak, but I'd be hesitant if you weren't in a dedicated Aristocrats strategy. There's no doubt that Yawgmoth is extremely powerful, but if you don't have synergies with counters, and you don't have a ton of creatures to sacrifice, then he's a clunky fit even if you're throwing out twice the -1/-1 counters and drawing twice the cards.

In other words, if your Verrak deck has a bunch of tokens or small creatures, then this is a slam dunk. Otherwise, it's very possible you'll spend four mana on Yawgmoth to look around the board state and wonder if his best sacrifice at the moment might be himself.

Razaketh more than passes the "eight-mana cards should more or less win you the game" test, and at least in a Verrak deck, Vilis, Broker of Blood might be even better. At the very least, it will have fewer people checking their phones as you thumb through your deck, as you can just draw the whole thing instead!

Not all your creatures will cost eight mana, though, and thus you're likely to love doubling up on Phyrexian Reclamation. While not every Verrak deck is going to be routinely filling the graveyard, there will be enough incidental deaths through combat and board wipes that there's no way you won't be able to use this to repeatedly loop through some utility creatures, which is the kind of slow build that can get you through the long game.

There are some favorites of mine that I would love to shout out, but it turns out there's enough of them that I should probably just do the whole list instead:

All of which more or less culminates in a decklist I put together to abuse all of this life loss!

I tried to keep all of the various possible builds of Verrak in mind throughout today, but as you'll note I eventually ended up building a Life Swap build. That's a strategy that has more or less been entirely restricted to Selenia, Dark Angel before now, which got me wondering...

As much as I love the life swap strategy, however, I must also at least glance at the can of worms I opened with the first quarter of the article:

Finally, what is your favorite card that can have its ability copied with Verrak? What's your more in-depth opinion on off-color fetches?

Let us know in the comments, and we'll see you at the table with all of the haphazard screws all throughout. Whatever it takes to get a game of Commander in, right?