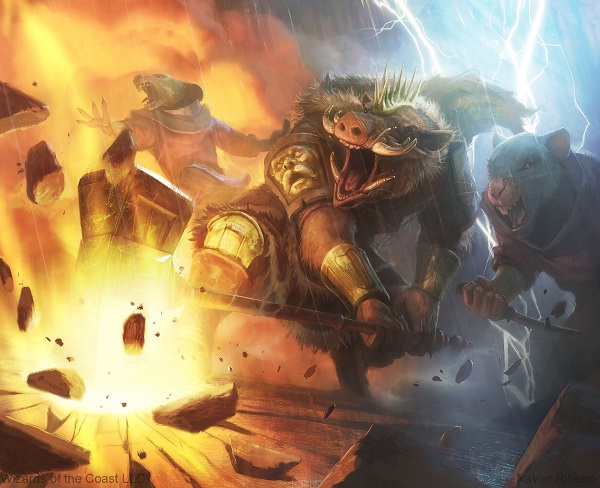 Welcome to Too-Specific Top 10, where if there isn’t a category to rank our pet card at the top of, we’ll just make one up! (Did you know that Runaway Steam-Kin is the only creature that lets you remove three counters simultaneously for three mana?)

Let me be clear: Raggadragga is a really interesting commander... but there are also going to be a lot of choices made for you. Specifically, choices made on the lower end of your mana curve.

For instance, here are some mana dorks you'll see in every Raggadragga build:

There. Now that we have that out of the way, let's look at some of the rarer mana dorks, shall we?

First, a slight detour: what is a mana ability?

Well, according to the rulebook:

That first part seems pretty straightforward. 'A creature with an activated ability that doesn't have a target' covers just about every mana dork that's ever been printed. The second one, however, is a much rarer ability, pretty much exclusively covered by mana "doublers".

As you can see, there aren't quite enough mana doublers to fill out a Top Ten. They're also not really the most likely creatures you're going to want to abuse with Raggadragga, so let's take a look at some more run-of-the-mill mana dorks, shall we? Only, we're going to have to get a bit creative to not just come up with a list of every Llanowar Elves variant ever printed (which, as previously stated, you probably already know to put in your deck):

Criteria: Creatures in the Gruul color identity with an activated mana ability that either cost more than one mana or have an additional requirement needed to utilize said mana ability. As is tradition, all results are ordered by EDHREC score.

Now that we've gotten the top ten of cards we aren't covering out of the way and set parameters for the actual top ten we're doing, let's start off this top ten with another top ten, shall we?

Raggadragga might not specifically say anything about Elves in his text box, but there's little doubt that a lot of his brews are going to end up Elf Tribal-adjacent. Whether it be all of the one-mana dorks or Beast Whisperer letting you draw cards from all of your one-mana dorks, you're going to incidentally play a lot of Elves even if you don't decide to go all-in. With that in mind, Marwyn, the Nurturer won't be a must-play in every Raggadragga build, but it's going to at least be in your Maybeboard. Three mana for a mana dork that becomes more of a threat in just about every way as you play the game is a great deal, and one you'd be silly to dismiss out of hand.

I had to regain some self-control the moment I saw Sanctum Weaver on this list, lest I end up brewing an Enchantress Raggadragga build instead of writing this article. I couldn't stop myself from at least poking my head in, though, and suffice it to say that the well is not deep or especially promising. Oh well, Sanctum Weaver will have to be happy with just being one of the most overly-powered niche cards in existence, and we'll just have to be okay with it not fitting this particular niche.

Hey, you know all that stuff I said about Marwyn? Well, it goes for Elvish Archdruid as well. If anything, it's actually slightly better-situated than Marwyn, as it fits into the go-wide gameplan and also doesn't have to wait to make a ton of mana. Plus, it's a 2/2!

There's rarely been a reason to actually play Simian Spirit Guide or its inspiration, Elvish Spirit Guide, and Raggadragga probably doesn't give you one, either. That said, if you're trying to build a high-powered Stax version of Raggadragga that will tap all the lands while you have all of the mana dorks to keep your side of the table going, then you'd probably want both of these. There's a lot to be said for a turn-one Llanowar Elves and a Bird before laying down a Smokestack or a Tangle Wire and Raggadragga himself.

Who knows, you might find yourself in a situation where your Winter Orb keeps the table locked down enough that in the late game you'd rather have a 4/4 than a single red mana.

As previously stated in my Myr article, I've never really understood the hype about Palladium Myr. To quote more directly from that article:

I'm as much of a fan of Worn Powerstone as the next player, but putting it on a creature makes it a lot more vulnerable. While I'm sure there're some decks that focus specifically on creature ramp because they also want to swing with said creatures, and some decks that focus on untapping creatures specifically, even those strategies put together probably don't equal 23,000 decks.

Well, it's 24,000 decks now, just a few weeks later, and I'm covering a deck that specifically wants to attack with mana dorks, and it doesn't want this card.

Or, at least, pretty much any Raggadragga brew I'd build wouldn't.

Someone please explain to me why folks like this card so much. I really am at a loss, and I'm a Battlecruiser afficianado!

5. Selvala, Heart of the Wilds

There's yet to be a Selvala that wasn't overpowered. While you don't see Selvala, Heart of the Wilds in Competitive EDH pods much anymore, she can still swing, draw cards, and tap for mana with the best of 'em. As such, it's no surprise that you'll probably see a lot of Raggadragga lists with Selvala in them. Although, is that even a good move? With the majority of the deck being 0/1 and 1/1 mana dorks, she's not exactly impressive on her own, really only shining when you have Raggadragga in play and can net three mana. In short, I think most Raggadragga builds are actually going to be too low-to-the-ground to bother with Selvala, although the odd Elvish Aberration or Cultivator's Caravan enthusiast may prove me wrong.

If you're looking for a slightly more expensive mana dork that can swing in for some real damage in the late game, then look no further than Incubation Druid. With both a means to get three +1/+1 counters all by itself, and a plethora of other means in green that can put random counters on this little Elf Druid, there's no shortage of ways to have this two-mana dork providing you three mana a turn. While it would be more of a slam-dunk in Raggadragga if its mana production was tied to its power directly, as it is with Gyre Sage, there's probably room for both in most Raggadragga brews, and they both have their pros and cons.

As previously noted with Marwyn, the Nurturer and Elvish Archdruid, there will be no shortage of Elves in pretty much any Raggadragga build. Ergo, Priest of Titania will be more than playable in just about any Raggadragga build! The real question is, once you get all this mana with your huge Elves, what are you going to do with it?

What am I talking about? You're in the exact colors of Elfball! Although an Insurrection couldn't hurt, either.

You may have heard that Manalith is a bad Magic card. In a format where Arcane Signet doesn't cost $20 anymore, that's probably true. However, even if you can't afford your two-dollar two-mana rock, there's hope on the horizon in the form of Ornithopter of Paradise. Not every deck will want to spend two mana for a mana dork when there are one-mana mana dorks to be had, but in the deck where your commander gives your 0/2 Thopter +2/+2, you could do a whole lot worse.

Bloom Tender is a good mana dork. I don't know that it's ever been $30 good, but there's no doubt that it is good. It will remain so in Raggadragga builds, although I think I would personally prioritize Priest of Titania and Incubation Druid over it. They all have a higher upside for the same mana cost, given that in all likelihood you'll only be tapping Bloom Tender for two mana. Still, if you've got the cash or the card lying around, two mana a turn for two mana is nothing to sneeze at, no matter what deck you're playing.

As always, we had a few corner cases that didn't quite fit the criteria:

I feel like the question of whether Dryad Arbor is actually good in Raggadragga could go on for pages, but I personally am a fan. Sure, you're playing a tapland that could and will get board-wiped, but it's also free damage in the late game when you're sitting around with all the mana in the world and not much to spend it on. Plus, who doesn't like a creature land with vigilance? As for Rishkar, Peema Renegade, while it doesn't technically meet the criteria, in reality it almost always will while also supplying your Beast Whisperer with +3/+3 and the ability to make mana. What's not to like?

As for the rest, you didn't think I'd let this article go by without brewing that Raggadragga Stax build, did you?

As you may have noticed, I'm skewing toward the edges of Competitive EDH with the Stax brew I put together (although not going all-in). Honestly, with commanders like Raggadragga, Goreguts Boss, that's to be expected. While there's no doubt that a lower-powered brew could be constructed, everyone would still just assume that you were going all-in with something geared as much toward high-powered play as Raggadragga is, so why not just embrace it?

Finally, what are your favorite lesser-loved mana dorks? Do you plan on brewing Raggadragga? Is Stax something you find interesting, even if you don't want to play it all the time?

Let us know in the comments, and we'll see you at the table that appears to be generating its own weather.