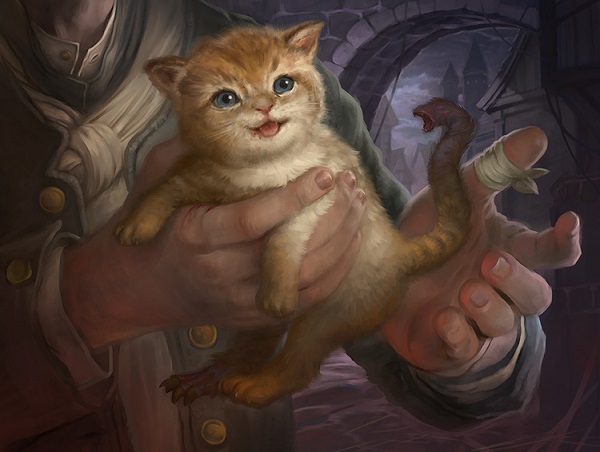 The Gifts That Keep On Giving...

Welcome to Too-Specific Top 10, where if there isn’t a category to rank our pet card at the top of, we’ll just make one up! (Did you know that Repercussion is the only non-Aura enchantment that allows damage dealt to creatures to be transferred to those creatures' controllers?)

Commander Legends has brought us all sorts of crazy previews, but the one that's gotten me the most excited is Blim, Comedic Genius, a take on the White Elephant strategy popularized by Zedruu the Greathearted. 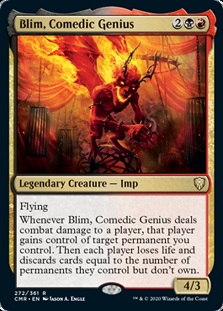 Blim allows you to take the gifts that keep on giving over to Rakdos instead of being stuck in Jeskai, which allows for a lot of really ugly tricks, like gifting your opponent a Treacherous Blessing. Or giving that other player a Phyrexian Negator before firing off a Blasphemous Act? Or best of all, how about making your opponents into Liches with Lich's Mastery?

Fun as that might be, however, there's only so many fun tricks that you can lean into before you need a more central strategy that works whether you have your commander or not. Luckily, Rakdos is known for a very specific, symmetrical strategy: Group Slug! The oft-maligned yet always good for a quick game archetype focuses on punishing all players in general and for specific actions, from things like Earthquake and Pyrohemia, that damage all players, to more specific things like Citadel of Pain, which deals damage to a player if they don't use all of their mana each turn. Whatever cards you use, however, the point is to rapidly diminish the entire table's life totals, often without regard for your own. So in between huge, convoluted donations to your opponents that can easily backfire if your commander is removed, there are still lots of options that will damage players no matter who controls them!

This tagline might be a tad misleading, as I do want this to stay focused on Blim, specifically, who can only give other players permanents. That means that the old stand-bys of Earthquake, Chandra's Ignition, and my personal favorite, Arcbond, are all going to have to sit on the sidelines while we go over our criteria.

That should leave us with just the creatures, artifacts, and enchantments that we can actually gift to opponents without having to worry about pesky things like them using that Heartless Hidetsugu or a Pestilence when it's not convenient for us. So, with that done, let's take a look at our top ten!

Howling Mine rubs a lot of brewers the wrong way, so Stormfist Crusader may not be for everyone. It being a two-mana 2/2 with menace certainly helps you stay ahead in addition to giving you and the rest of the table a little less life and a little more cards, however. And given that you're going to have to shy away a bit from black's more typical card draw options that have you specifically pay life for cards, Stormfist Crusader is a nice crowd-pleasing option that will have everyone happily drawing a card right up until they start getting down to single digits.

It's no Blood Moon, but Burning Earth is also more likely to let you leave a table still friends with the folks around it, as you'll have accelerated a game rather than dragging it on for hours as people try to figure out how many basic lands they have in their four-color deck. Speaking of, you'll still be playing two-color with the knowledge that you'll be playing this, so you're much more likely to pack twenty or more basics to ensure that you stay a bit ahead as folks grumble about the damage from their shocks and fetches adding up to a lot more than usual.

For those not wanting to look up the more modern Gatherer wording, there's no such thing as "successfully cast". Whether a player's spell is countered, is bounced, or fizzles, that player will still be taking two damage, along with the player who responded with said Counterspell, Unsubstantiate, or Whitemane Lion. That kind of damage adds up under the best of circumstances, but given the number of decks in EDH that are based around casting spell after spell in gigantic turns of triggers into triggers into Storm counts, Spellshock can often drag half the table or more to a complete Standstill.

Spiteful Visions has been around for a lot longer than Stormfist Crusader, but aside from that small advantage it's also quite a bit more damaging and quite a bit more resilient. The tradeoff is that it is four mana to cast this enchantment, and players get a chance to draw cards before you do, even if they're taking damage by doing so. Still, all in all, Spiteful Visions both keeps your hand stocked along with ensuring that the table takes consistent damage, to say nothing of how much of a problem this will be for decks used to drawing handfuls of cards at a time.

Even the most competitive tables still have to play lands, so why not punish them for doing so? Zo-Zu the Punisher allows you to do just that a la Ankh of Mishra, along with swinging in for a few damage if for some reason players don't have the resources available to keep a blocker in play. Can't imagine why that would be the case...

Speaking of damaging players just for trying to play the game, Manabarbs! It might not be the most appreciated when you plop it down, so be sure to remind everyone that it's happening to you, too. That always works, I promise.

But seriously, Manabarbs racks up a lot of damage on players quickly, whether it be them just trying to do what they need to to stay alive or trying to dig down to find some removal for it. Just be careful, because it's an easy trap for you to fall into, as well!

The original damage-doubler; Furnace of Rath doesn't care who owns it, it only wants to make sure that everyone dies a bit quicker. It, unfortunately, won't double Blim's loss of life trigger for when you give it away, but throw in a couple other entries from this list and it'll get the work done for you.

"Good enough to be banned in Standard" was pretty much the definition of a staple in the early days of EDH, and at least in the case of Rampaging Ferocidon, that continues to be true. A 3/3 with menace for three mana is already pretty competitive, but players not being able to gain life is an absolute necessity for Group Slug decks. Add some serious damage outside of combat for players trying to find a means to block this feisty little raptor, and Rampaging Ferocidon can more than break the rapid damage parity you've created.

The original Group Slug card from before it was even a term, Sulfuric Vortex also makes sure that those pesky Orzhov players aren't messing with the mass arithmetic while also subtracting a couple digits each upkeep. The best part is that, unlike the Howling Mines of the world, your opponents take the damage first!

1. Dictate of the Twin Gods

Almost doubling Furnace of Rath's inclusion count, Dictate of the Twin Gods has the exact same rules text with an extra mana and the word "flash" attached. Turns out that extra word of rules text more than makes up for the higher mana cost, however, as you can easily use this epic red enchantment as a combat trick or a surprise means to take a player out of the game. My absolute favorite thing to do with this card, however, is to make deals around attacks that end a bit differently than the table was expecting!

Given that many will be trying to actually build Blim, rather than gush about how much I love Repercussion and add to the word count, it's probably more useful to just give the rest of the top universal damage effects that will work with him to the crowd at large:

There always seems to be a bit of interest in how these lists are made (this seems like a good time to stress once again that they are based on EDHREC score, NOT my personal opinion…), and people are often surprised that I’m not using any special data or .json from EDHREC, but rather just muddling my way through with some Scryfall knowledge! For your enjoyment/research, here is this week’s Scryfall search.

While I'm sure a lot of folks have still-developing opinions about how they feel about Blim, Comedic Genius, opinions on Group Slug and universal damage effects are probably a bit more developed.

And finally, what are your favorite universal damage effects? How do you feel about White Elephant as a strategy? Are you planning on playing Blim, and if so, are you going the group slug route?

Let us know in the comments, and we'll see you at the table we know we're going to have to give up to the draft that starts in 45 minutes. Maybe we'll be able to sneak a quick game in, though?