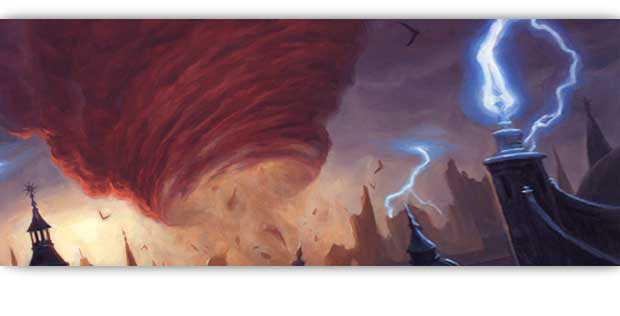 Welcome back to Weird Harvest, the column devoted to all things jank. This week we have our sights set on an Esper commander that tries to do something on its color identity. I know, the notion shocked me as well when it initially occurred to me. As I contemplated this thought for a bit it finally occurred to me that I was fighting the card text, which never yields satisfactory results. Instead, I needed to embrace the bad part of the card to truly ascend into the upper echelons of jank. Don’t get too comfortable with your board state, because this is Dromar blink and bounce!

Out of all the older dragon legends out of the Invasion cycle, this one honestly speaks to me the least. It’s not that the other ones are bad, but they aren’t terribly interesting either. At first glance, we can see that our cost is a tad prohibitive. I don’t typically like to run commanders that are above the 5 CMC range, but it does help that we are getting an on-curve 6/6 flying body. The second ability is what’s intriguing. Whenever we deal combat damage to a player we can pay 2 generic and a blue to return all creatures of a color of our choosing to their owners’ hands. To be fair it hits us as well if we choose any one of the 3 colors in our identity. This is janky and a bit unwieldy to try and build around. At first, I was a bit drawn to the idea of trying to mitigate this as much as possible and just jam all the blink cards possible. As I tinkered with it, however, I noticed that maybe there was some power to be gained in embracing the idea of bouncing our stuff. I started scouring Azorius and Dimir EDH archetypes to determine what all we had that would work with the idea of bouncing our own stuff. What I came back with was the realization that there is one thing that both blinking and bouncing love to be paired with, and that’s pure value.

The cool thing about blinking and bouncing is that functionally we yield the same benefit when we stack the enter the battlefield triggers. Bouncing is considerably worse in the grand scheme of things, given that we must recast our spells, but in all honesty, it’s not the end of the world. We just take the necessary precautions to ensure that our opponents are far more affected by this than we are. This sent me on a quest to find a package of cards that ensures that we would be consistently setting the game's pace. I started with enchantments, because I’ve always found that of the different card types available they are usually the ones that receive the least literal amount of hate in deck compositions. Before you all take to the comments and start screaming, “PLANESWALKERS BY DEFAULT! LESS HATE! RABBLE, RABBLE, RABBLE!”, I need you all to understand that I agree there is the least amount of literal hate for it. I just don’t care to start there because I find “super friend” decks to be very boring and, for our purposes, not very janky at all. Mana Breach: What a horrible Magic card. Seriously, this thing makes me want to rip it in half just reading it. It embodies everything that I personally loathe in blue. I’m sure that whatever R&D person that made this back in the day thought that it was balanced due to it effecting both players equally, but forget that. Forcing players to lose a land drop to cast a spell is absurd. All that aside, this is precisely the kind of card that helps us twist the knife on Dromar’s ability. Sure, we get to send things back to our hand as well at times, but if our opponents aren’t playing hyper-ramp landfall we should be good. There are 509 decks using it, and it doesn’t shock me that a fair bit of them are landfall decks. Warped Devotion: This is another horrible, nay terrible card. Like Dromar’s ability, it affects us as well, but once again we can build our deck in a fashion that lessens the impact to us vs the others. It will certainly be unavoidable from time to time, but we can run enough blink effects to try and reasonably mitigate how much we hurt from this card. There are 78 decks running it now, and I’m sure they all fellow masochists.

I feel the need to take a moment to talk about a grouping of cards that have the potential to make this deck a blast to play. Celestial Dawn is an interesting card that certainly puts in work in quite a few decks, 881 to be exact. What’s cool is how it interacts with other color changers. Since both effects happen at the same layer, your creatures will be the color of the last effect to hit the battlefield. So, if Celestial Dawn enters the battlefield after Darkest Hour, all creatures will be black except for yours. Your creatures will be white. Now this makes the timing of some of our enchantments a little tricky, as you would almost ideally want Celestial Dawn to be the last one stacked, primarily because it alleviates so much of the strain of running a 3-color deck. There is also that nice bonus of it making our Dromar bounces one-sided, but that’s nothing that we want our opponents to focus on. It’s not a deal breaker if you don’t get to stack the effects optimally, as the worst-case scenario of landing dawn first will just mean that the creature color shifting will be null and now your Dromar bounces will affect us equally. That’s where the value package comes into play.

When it comes to value oriented enter the battlefield effects, look no further than Panharmonicon. Yeah, I know that it isn't super original to jam this in a deck with a blink subtheme, but I don’t care. There is an apparent reason that 11,494 decks run this thing. It’s insane if it can stick on the board. Suddenly sending our creatures back to our hand doesn’t sound so bad. Who needs Erratic Portal or Cloudstone Curio when you have Dromar? Granted, both are completely acceptable if you are trying to build a deck along these lines. I just chose to omit them for personal reasons. Let’s look at our value package.

I love these cards for several reasons. Nobody can argue the benefit of Wall of Omens or Mulldrifter’s ability to draw cards. Nor will anyone argue Gonti’s ability to, well, win the game. But out of all the interactions with our bounce/blink shenanigans I have to say I’m most fond of Rishadan Brigand and Rishadan Footpad. I’ve always loved these effects, and was probably one of one person in the world who was stoked when Spelltithe Enforcer was printed. The runner up definitely must be Sage of Epityr forming a poor man’s Sensei’s Divining Top. You just can’t beat a 1 mana creature that can sculpt the top four. Being able to repeat and even double up on these effects is just hilarious. With the value package and some mood ring effects in tow, we can now dig into the rest of the deck.

At heart we are just an Esper control variant. When you have a strong suit, why not play to it? You’ll see some typical removal, as we don’t want to be a counterspell deck. We could certainly build that way, but we would have to completely rework the slots to accommodate more spell slinging. Not to mention it wouldn’t be janky just to build another straight Esper control build. We want their spells to resolve, or at least their permanents, so that we can bounce as much as possible. Besides, there’s no harm in forcing someone else to take on the interactive police role. There is a wealth of Blue centric players out there that will fulfill that role, and we don’t have to be one of them. Here’s a look at the final 99 I ended up with.

While we’re at it, I figured we might as well have a functional breakdown of the deck by card role.

The idea is that we’ll be attacking our enemies on two vectors: bouncing lands/creatures back to their hands is our primary method and forcing discard is the backup plan. We have a third smaller strategy worked in with forced sacrifice, but it’s minor in the sense that there are only three cards that fulfill this role. You may notice some overlap between sections, and that’s by design. Given that we are a value oriented control deck at heart, we want as much overlap as possible across our roles. This allows us to ensure that what we are holding and casting always feels relevant. Otherwise we just bounce a bunch of things without rhyme or reason.

Overall, I think this deck is a blast. We get to do some familiar things, such as blinking value and controlling the board state, but we also get to go about them in some unorthodox ways. Bouncing lands and creatures isn’t likely to win you friends anytime soon, but it is largely relevant versus most strategies. This idea can be tailored to be even more aggressive than my build. I’m not an extremely aggressive player by nature, but this kind of control deck has the potential to be more proactive than reactive. I think that’s sweet as most control commanders, and strategies for that matter, tend to be rather narrow. One-sided creature creature bouncing is about as close as I've come across to having Cyclonic Rift as my commander, but I remain hopeful that R&D will slip up and print something even closer than Dromar so that I can live the dream. I would love to hear your feedback and suggestions for this idea. I’m also interested to see if anyone has any request as it’s been a while since we’ve had one. As always, have fun and keep on tapping in the free world.