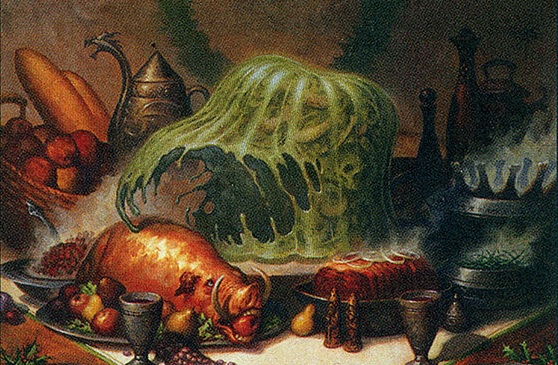 We find ourselves in a strange place, as we often do, a realm of juxtaposition. The sun hides, and the nights lengthen. There is disparity in this season. Somewhere, a Dark Souls joke is made. Heat and cold. Bonfires and snow shovels. Hygge and the bitter chill of winter.

Welcome to Yule Shot, where we brew two decks at the same time... in one deck. This time, to honor the elder gods of Candletide, we'll be knitting a warm blanket of the Snow supertype atop an Ooze tribal subtheme. How is Snow presented here as a metaphor for warmth, you ask? Igloos. And why Ooze? Well, in anticipation of the eventual errata of Yule Ooze to black border, of course.

I think Jegantha, the Wellspring looks suitably festive. If one were to make a New Year's Resolution to forego multiples of duplicate mana symbols in card costs, Jegantha could probably pull the royal sleigh of someone like Kenrith, Returned King, who, in the lore of Eldraine, is prophesied to become Santa Claus in his twilight years. Though some sad substitutions would have to be made (God rest ye merry Predator Ooze), Kenrith's second ability could make for a powerful +1/+1 counters tertiary theme that permeates, and even 'permanates' throughout the brew.

But we'll keep this list cozy, so that means lots of mana symbols in casting costs. With Jegantha steering (sleighs have wheels, right? Hmm... ask the wheelwright), that gives us access to things like Glacial Plating. Oh, this is going to end up being a Cumulative Upkeep deck, isn't it?

One would think the cold might slow our gelatinous friends down. Is there such a thing as too viscous? Let's find out.

Santa Took the Year Off

We're running 40 lands in this list, giving Rudolph plenty of room to touch down. We're a bit color-intensive, thanks to the many multi-pipped Oozes, so we've excised some obvious lands, such as Frostwalk Bastion, Dark Depths, and Mouth of Ronom. While we are trying to cool things down with ice counters, Marit Lage will have to wait a little longer: the additional color sources in this list seemed more important than a few more frosty permanents. Generally, our ice counters will be doing different things, but with Rimefeather Owl, we can refrigerate our own gelatinous desserts, adding to our total number of Snow permanents in a pinch. Woolly Razorback and Thing in the Ice will even be Snowy for a little while.

More likely we'll be plowing away both with our abundance of winter wonderlands and with cards like Chulane, Teller of Tales and Golos, Tireless Pilgrim (incidentally, second and third in line for the Santa line of succession). It shouldn't be too difficult to flash in Ice-Fang Coatl with deathtouch, nor should Heidar, Rimewind Master's activated ability be unavailable for overlong.

Of course, as the snow piles up, so too should our +1/+1 counters, accumulating in the gooey eaves. While Hardened Scales might seem as brightly obvious as the North Star, our included lords and anthems and the like serve us well enough. And as far as the +1/+1 counter interactions themselves (e.g. Ooze Flux, Experiment Kraj), we should have a reliable stockpile even without doubling.

And hey, Obelisk of Urd does a decent impression of a Douglas Fir.

However, what if we had someone pulling the reins as well? Left alone, Jegantha just kind of follows their nose. A little bit of navigational experience from a pilot with more than a few flights under their sash could give us some much-needed guidance. Indeed, Kenrith, the Returned King has 3,630 decks as of this writing, compared to Jegantha's 216. Sorry, Rudolph.

Santa does not simply walk to the table. He'll need Jegantha leading the van (and maybe Crown of Ascension and Snow Devil) if he's going to take flight.

Slate of Ancestry will tell the tales of the sleigh-drivers. Oh, and now with Kenrith reigning o'er the land, tossing your hand into the 'yard has the potential to fuel your commander's fifth activated ability. The Mimeoplasm doesn't mind a populated charnel house, either. Huh, sounds festive.

You'll have noticed that the +1/+1 counter quaternary theme has suffered in the new list, but Kenrith himself provides a bit of support with his second activated ability. In addition, Corpsejack Menace showed up, fitting in nicely with the forgotten leftovers of the holidays. Without Rimefeather Owl, we won't be feasibly freezing our Oozes, and our lost lords a-leaping means less in the way of holiday cheer. So, Dead of Winter is likely to hit our jams and jellies along with any other creatures sans snowfall. Fortunately, Kenrith, Returned King can convince our lazier (that is, dead) Oozes to get back into the workshop and get them making toys again. Prime Speaker Vannifar is an Elf Ooze Wizard, so this extremely roundabout metaphor has legs. Or, uh, slime... feet.

That's it for this Frore and Frosty Feast, Prepared Two Ways, and Forgotten in the Fridge, and that's it for this inaugural edition of Yule Shot. I hope you all enjoy the remainder of this winter season as much as possible - it is the denouement to 2020, after all. Be sure to fish out any +1/+1 counters in your eggnog, those aren't supposed to be in there. Let us know in the comments below if you've gotten up to any wintry brewing lately, and what it's looking like. Food tokens? Politics? Group hug? Every single card with synonyms for cold?

Till next time. I'll be hoping you all stay safe and warm and fed this season. Happy holidays!