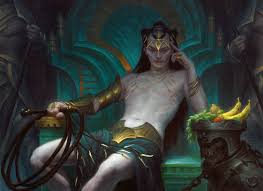 Welcome to Andrew Jackson Highlander, a weekly series where I share a Commander deck tech that costs twenty dollars. In this article, I finally explore a play style that I have yet to touch on this series: combo.

Love it or hate it, combo is a major pillar of the EDH format. It is pretty clear from the decks I share I prefer creature decks or synergy value decks. Those are the decks that are common in my meta, I tend to prefer playing those kinds of decks, and from a pragmatic viewpoint, they're typically much easier to design on a budget. This week, I have a deck I've been tuning and testing for some time that I am proud of and that I think any budget-minded combo player will enjoy. (A quick note: this week's deck tech will look different than most weeks to explain the combo better). The deck is headed by Tasigur, the Golden Fang and revolves around Freed from the Real and Pemmin's Aura. This deck is very one track. Filter and tutor through the deck to find the pieces you need to assemble infinite mana. Once again, we need Freed from the Real or Pemmin's Aura + an Extra Mana Enchantment or Bounceland that taps for blue + a Land Untapper.

Then you can cast Tasigur and find your win con as needed. If for some reason Tasigur is offline thanks to something like Nevermore we have some efficient interaction to help push the combo through and our win cons can also be grabbed by our tutors.

However, Tasigur being denied usually is not the real concern when running this deck. We need to make sure to protect our land untappers, extra mana enchantments, and especially Freed From the Real and Pemmin's Aura (since we have less redundancy with those pieces). The way you protect the combo can vary by meta, which I will cover in the next section.

This deck plays like any combo deck and the best description I have heard of playing combo is: Playing a game of solitaire while someone tries to knock your cards off the table. You are racing to the finish line to finish your combo and only care about what your opponents are doing if it will stop you from doing what you need to do.

This deck can win on turn 4, goldfishes a win on average on turn 5.6 (100+ goldfishes), can consistently go off with interaction up on turns 6 & 7, and is fairly resilient thanks to all of the redundant combo pieces.

Lands- As with any budget deck, upgrading the mana base is always a great idea. For a combo deck, that wants to be as fast and efficient as possible, having all of your mana available and on time is even more important than most decks. Tutors- Getting better tutors, like Vampiric Tutor and Demonic Tutor, is always a high priority for any combo deck. Interaction- Better ways to protect your combo, like those listed above or the higher budget mainstays like Pact of Negation. Also consider cards like City of Solitude or Dosan the Falling Leaf that prevent your opponents from interacting on your turn.

Answers To the Deck's Weaknesses- I will go through some options to help shore up this deck's weaknesses below.

The most important part of playing this deck is protecting your combo. And how you would go about doing that can change on what types of interaction you will see in your meta. We run a lot of extra mana enchantments and land untappers, probably a few too many of each, so you should plan on cutting those specifically for cards that will help in your meta. Here are some problem forms of interaction and some cards we can put in to help combat them.

Exile Effects- Cards like Void Shatter, Utter End, and [cardForsake the Worldly[/card] can completely shut our deck off if they hit Freed From the Real/Pemmin's Aura or slow us way down by hitting any of our other pieces. The best way to protect against this is to run more counterspells. We have a pretty good suite in the deck already but Swan Song, Delay, and Remand are great upgrades to add. An underplayed budget option is Prohibit. Don't forget the OG either: Counterspell.

Spot Removal- We can get blown out pretty easily by spot removal. Killing one of our creatures in response to us attempting to put Freed from the Real/Pemmin's Aura on it ends up putting two of our combo pieces into the graveyard. While more counterspells could help with this, going too heavy on counterspells or holding up countermagic all the time is not pragmatic or efficient. A better option in a spot removal heavy meta are recursion cards. Green really offers the best options with: [[Reclaim]], Regrowth, Recollect and all of the variants. NOTE: If your meta runs a lot of targeted land destruction, the best option is countermagic for the spells and a lot of recursion if it is mostly Strip Mines and Dust Bowls.

Stax/Tax Effects- No combo deck wants to be slowed down. If your meta has a lot of ways to slow you down, run more spot removal to break through and go off. Some good options are Deglamer, Unravel the Aether, Krosan Grip, and Go for the Throat. Efficient bounce spells are a good option too and Wipe Away is a surprisingly strong way to set up your combo turn.

I was really excited (and nervous!) to share this decklist with you. I don't play a lot of combo decks in EDH and when I have in the past, they certainly were not budget lists. I think I have put together a pretty solid list for $20 and I want to make sure to make lists that appeal to as much of the player base as possible. I have been brewing, testing, and goldfishing this deck since I first thought up the idea for AJH and I hope that effort shows.

The deck is surprisingly resilient, is fun to play, and is not extremely complex or convoluted like some combo decks can be. While the playstyle really isn't for me, I understand the appeal of assembling a Rube Goldberg machine of a win con as fast as possible and trying to sneak that wincon through and I think this deck does that. I also like that having Tasigur in the command zone facilitates the strategy but that you require multiple other pieces to get him going and you don't even technically need him to win (seems more sporting).

I hope that everyone enjoys the list and I hope that Mr. Golden Fang enjoys asking your opponents if they want fries with that.