Hello, and welcome back to Archetune-Up, the article series devoted to tweaking a deck with the help of the EDHREC Theme pages!

As an author for EDHREC whose entire series revolves around themes and the like, I do my best to try and keep the time of year in mind to add to my articles' relevance. Take this past October, for example. Four incredibly spoopy articles in the span of a month in order to properly celebrate Halloween! As such, it would be strange if I didn't do something similar for The Holidays™, no?

The issue is, though, I am a bit of a scrooge, and I completely dread this time of the year. As such, I will be continuing the tradition of writing an article about one of the format's contentious and stressful archetypes. Last year's was a Jin-Gitaxias, Core Augur mono-blue stax list. This year, I will follow suit with a new friend from Commander Legends who is just dying to entertain you with his neat little trinkets and stax-y gifts; Blim, Comedic Genius! 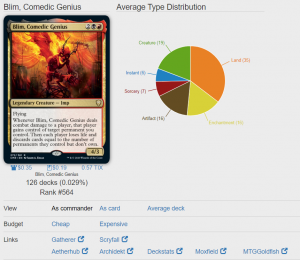 While Blim has over 100 decks to his name, there isn't enough data here to suss out any themes for his commander page, but worry not! We've dealt with similar situations before, so this will be a piece of cake. Ascribing themes to decks instead of using ones provided for a commander is half of the fun here on Archetune-Up!

Speaking of average lists, let's see what Blim's got going for us:

Lots of nasty little toys to throw at our friends (and enemies) in this deck. Blim is definitely a much more mean-spirited Zedruu, the Greathearted, and is perfect to be our stand-in for Krampus this year.

While there are some great cards in this list, a handful of them didn't feel impactful enough or just weren't my style.

Cards like Cinder Giant and Wretched Anurid were a bit niche, and their success seemed to hinge on a playgroup's playstyle. Then there were cards like Nefarious Lich and Forbidden Crypt, which are all good and fine, but there were so many "lose the game" effects in the deck already. It almost felt like like this deck was more about making people immediately lose the game than giving them bad gifts, which is much less fun I think. Finally, there were cards like Oath of Lim-Dul, who have thirteen lines of text in size 3 font that I cut on principle. I don't care what the Oracle text says, I don't care how simple the card is, my playgroup and I don't have time for that.

So. This deck has a lot of bad gifts built into it... so many that it was actually making the deck a bit cumbersome and unwieldy. What's the use of all of these bad gifts if we cant give them all away? If Blim gets killed, or if we aren't able to donate things fast enough, we're stuck holding the bag, and that is not a good time for us. Instead, how about some Stax-y pieces that aren't "lose the game" impactful, but something a bit more strenuous for the board as a whole that won't hurt us if we can't donate them the turn we play them?

Smoke and Orb of Dreams hamper opponents significantly, helping to curb aggression that will inevitably come our way. This deck is not going to make friends, and outside of In Garruk's Wake and Plague Wind, black and red don't have a lot of semi-conditional boardwipes like white does. Instead, the plan here is to tap down creatures and shut off haste on opposing threats. Winter Orb and Static Orb are also potential inclusions here if you really want to gum up the entire table, but use them at your own discretion since they are actually miserable to play against.

Next, Blood Moon and Grafdigger's Cage provide very potent ways to fight back against decks with greedy mana bases and decks that want to cheat creatures into play, specifically if they are doing so from the graveyard. These two cards are fantastic in the fight against decks that obnoxiously skirt around costs or that accrue value too easily, namely commanders like Golos, Tireless Pilgrim, Muldrotha, the Gravetide, and Meren of Clan Nel Toth. I'd consider these two cards the least mean of all the ones that I included, as they are tools that actively help fight back against unfair strategies.

The last cards from the Stax theme work on two distinct axes: two of them help dampen opponents' progress while helping defend us against certain strategies, while the other gives us the means to close the game.

Sphere of Resistance and Damping Matrix have the potential to completely shut down certain decks while also being a general nuisance to the rest. Sphere of Resistance really hampers Spellslinger and Storm strategies, making their lines of play incredibly hard to achieve thanks to the added tax on their spells. Damping Matrix continues dunking on the aforementioned Golos, Tireless Pilgrim, as well as on popular commanders like Araumi of the Dead Tide, Thrasios, Triton Hero, and Breya, Etherium Shaper. Being able to shut off the abilities of creatures is a huge boon that really helps keep decks that rely on them from going completely out of control.

In a surprising turn of events, the last card from the Stax theme is a card that we don't want to give away. Wound Reflection is an enchantment that we're going to want to hold onto since it's a great way to help us whittle down opponents and close out games. Yes, we plan on knocking opponents out over time through our gifts of misfortune and Blim's triggered ability, but there are only a finite number of turns and permanents that we can give away. On top of that, because I decided to cut a few of the "lose the game" cards right at the beginning, I wanted to make sure that we had another way to close out games in a timely, but not instant, manner. Wound Reflection meets us in the middle, doubling up on the life loss that Blim inflicts, moving us closer to the end of the game, but not taking immediately winning it outright, which is exactly the speed I like in my games.

Now, normally, I like to add in ten cards from a theme when doing my tune-ups, but I stopped at seven for this list. While it is great to stick to a theme, it is imperative to make sure that you don't swing the pendulum too far in one direction. This is a Blim deck with stax pieces, not a Rakdos Stax deck that features Blim as the commander. There is a huge distinction between those two deck ideas, and I wanted to make sure that I stuck to the former rather than the latter.

In this vein, I felt the need to ensure that I wasn't straying too far from Blim's preferred build, and wanted to add in three cards from his commander page to help round out the list and stay true to our awful little Santa.

Double strike is a potent keyword, but it's even better in this deck. Not only does it turn Blim into a three-turn clock if necessary, but it will also allow us to give away twice as many "gifts" per turn, inflicting twice as much "fun" as well! There are other cards that can fill this role, like Berserker's Onslaught, Fireshrieker or Temur Battle Rage, if you want to lean more into double striking your foes, but I thought that Blood Mist was the cheapest consistent double-strike-enabler since, more often than not, our plan is to swing only with Blim.

The next card is another bloody good one: Bloodthirsty Blade! Now, the Blade is not a card you will want to donate, and, in fact, despite what it may seem like, it does not put itself under an opponent's control. This means that we won't be getting any Blim triggers off of it... so why is it in here? As I mentioned before, we aren't making friends with this deck. Bloodthirsty Blade is a cheap, repeatable way to make sure that the strongest, scariest creature on the board is always looking at someone else. Combine the Blade with Smoke and other cumbersome effects, and we will be able to disrupt our opponents' combats and protect our life total with relative ease!

The final card from this page is the epitome of one that is both naughty and nice. Fires of Invention lets us (basically) double up our mana in the early game, which gives us a form of pseudo-mana ramp. This deck only has five instants as well, meaning that we aren't losing out on much by only being able to play spells during our own turn. That said, we may not want to live under these restrictions for the entire duration of the game. We can easily trade away Fires of Invention to opponents who it would hurt the most whenever we decide that it has served its purpose. Once again, this can be used to combat Storm decks, Spellslinger decks, or decks that heavily rely on instants or counterspells like Talrand, Sky Summoner, Mizzix of the Izmagnus, or Kalamax, the Stormsire.

He'll Be Comin' Down the Ch-imp-ney Tonight!

And there we have it, another downright delightfully scrooge-y deck!

I'm surprised to see how many hearts that Blim has captured in his short tenure since his release. At the time of writing, he has over 120 decks to his name, competing with the likes of Nevinyrral, Urborg Tyrant and Archelos, Lagoon Mystic, which I think is a fairly impressive feat.

We've seen commanders that like swapping permanents in the form of Inniaz, the Gale Force and Zedruu, the Greathearted before, and it seems to be a style of play that players like, since they have about 300 and 1,500 decks, respectively. What is nice about Blim, though, is that he gives this archetype a much-needed splash of black, giving the "permanent swapping" archetype the ability to play nasty little cards like Demonic Pact and Immortal Coil.

What are your thoughts on Blim, though? Is he a subpar Santa, or just the Imp for the job? Do you prefer the usual foray into blue, white, (and sometimes) red for this kind of strategy? Do you think that this iteration of a gift-giving legend is perfect and in the best colors for the job?

Also, please let me know which new legends from Commander Legends you'd love to see Archetune-Ups about! All of them are fair game, whether they are singular legends or Partners! Make sure you let me know below!

Until next time, you can reach me on Twitter (@thejesguy), where you can always hit me up for Magic- or Jeskai-related shenanigans 24/7. Do you have any comments, questions, or concerns? Please don’t hesitate to leave them below or get in touch! Stay safe, wear your mask, and keep fighting the good fight. I support you. No justice, no peace.