Today's Archetune-Up is going to be a bit different. Not only is this a super premium Thursday Edition of Archetune-Up, but for the first time, we will be venturing outside of EDHREC's Theme Pages and utilizing the site's Precon Upgrade Page to help tune up one of the preconstructed deck from Commander 2021!

The first precon that I ever bought was Commander 2011's Zedruu the Greathearted Political Puppets deck, and, as such, I have a penchant for decks that want to play in the realm of politics.

This year's Silverquill Statement deck functions in a similar vein to Commander 2011's Zedruu deck, as it wants to manipulate the board through favors and political maneuvers to help close out games. Along with this, like most of the preconstructed decks, Silverquill Statement has an additional theme baked into it; in this case, +1/+1 Counters. This additional theme allows for some creative and flexible deckbuilding, but it's important that the list doesn't lose focus since it has multiple moving parts.

With all that said, let's move to the Silverquill Statement Precon Upgrade Page and see how players have been tuning up the deck the past two weeks!

EDHREC's Precon Upgrade Page is one of the most useful tools the site has at its disposal. It has pages for each preconstructed deck, ranging from this year's Commander 2021 deck all the way to the aforementioned first ever Commander set, Commander 2011!

Each page gives a brief overview of what they contain, broken down into the following sections:

By breaking the entire preconstructed deck down into categories like these, it makes upgrading a staggering 100-card pile a lot more digestible.

Normally, when I cut cards for Archetune-Up, I do an easy ten cards in, ten cards out. With this article, I'm going to make it even easier and simply pull out the top ten cards from the "Cards to Cut" section of the precon page that were listed at the time of writing this. 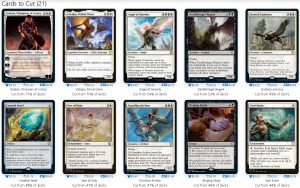 While some of these cards I might personally keep in the deck, I'm going to follow player trends and nix all ten of these, regardless of personal preference. This naturally raises the question: what am I going to add in to replace these cards, and why?

The first thing that I had to remember about this deck was that it isn't like the average decks that I usually pull from the site. The average decks that the site generates are an aggregate of years of decklist data, where as this time, I'm looking at a precon from WotC. What I mean by this is that while preconstructed decks have vastly improved over the years, they still often don't have the amount of ramp that you will see from most decks in the wild.

Plenty of other people must think this as well, since Talisman of Hierarchy, Charcoal Diamond, and Marble Diamond are some of the most added cards on this precon's page. Smothering Tithe and Monologue Tax also show up on the page, and while I didn't add them due to price, they also do a good job at showcasing how important players feel that ramp is for this deck.

When looking at the cards I cut, I wanted to be sure that I added cards in that either did their job better; either by being more on-theme or more efficient, or sometimes both!

Since I had pulled out a handful of removal, I wanted to be sure to replace it. Council's Judgment and Merciless Eviction were perfect fits in this regard.

Council's Judgment is a fantastic removal spell in general, but it's also right at home in a political deck. Being able to convince opponents to vote in certain ways can often lead to more than one permanent getting exiled, which can in turn then breed more political situations to capitalize on! Merciless Eviction is a great inclusion in any W/B/X deck thanks to its versatility and pure power, but because of these things, it can also be leveraged as a powerful political tool. You might need artifacts to be gone, but perhaps an opponent needs creatures gone? With Eviction, surely a deal could be struck that could make both of your lives quite a bit easier...?

Similarly, Sphere of Safety is a solid bit of pseudo-removal. While Sphere doesn't outright get rid of creatures, it does something more important: it turns your opponents' creatures away from you and towards one another. There are a handful of enchantments in the deck to support it as well, so adding an extra two- or three-mana tax to attacking creatures can often be the nudge your opponents need to go after one another instead of you. More importantly, by subtly guiding your opponents to engage one another in combat, they will trigger Breena's ability and sow discontent, which is the main goal of a build like this.

Earlier, I said that it was important that the deck didn't lose its focus as a political deck, but I think there are certain nods that we can give to the deck's +1/+1 counter subtheme, and The Ozolith is one of them. One of the lines that Breena has to balance is making sure that you're able to keep up with the card advantage that your opponents naturally accrue from her. This can be done in a variety of ways, but my personal favorite is making sure that the counters you get from her stick around for the rest of the game. The Ozolith lets you stack up counters throughout the game, slowly letting you snowball. This line of play is gradual and subtle, letting you build up over time, turning any of your creatures into a game-ending threat in their own right, Breena included!

The Most Silver of Tongues

While the Precon Upgrade page is a useful tool to help tune up Silerquill Statement, I also think it's important to compare it against the face commander's EDHREC Page. While most people will be upgrading the deck right of the box, some people are building with Breena fresh, meaning their inclusions may not end up being added to the upgrades page. By balancing both of these, you're able to take the best of both and end up with a stronger, more cohesive deck!

Due to +1/+1 Counters being a subtheme in the deck, I wanted to make sure that I wasn't going out of the way to work for them, and instead make sure that they'd be working for me. This is where cards like Shinewend and Bloodtracker come in. Both creatures are serviceable on their own, but when combined with Breena's ability to add counters to our creatures, they blossom into potent effects that the deck adores.

With the help of some additional counters, Shinewend becomes a repeatable Demystify, either keeping enchantments under our control or functioning as an on-board tool that opponents can call on if they want to make a deal. Conversely, Bloodtracker is a fantastic way to keep up with the card advantage that Breena gives your opponents. Due to Bloodtracker's ability, if an opponent decides they want to draw a card with Breena, you'll eventually outpace their card advantage and draw double the cards they have thanks to all of the +1/+1 counters placed on them!

The inclusion of Zetalpa, Primal Dawn in Commander precon decks has become a bit of a meme at this point, but I promise, it was included for a purpose: a way for the deck to eventually close out games. While I appreciate WotC's tenacity for reprinting Zetalpa at the rate of Colossal Dreadmaw, I still was compelled to replace it with a better win con, and Approach of the Second Sun was it.

This deck is built to take advantage of our opponents' actions and slowly strangle them with the favors you're providing. Approach is used as a way to close out games where you're in a 1v1 scenario or when the board is entirely under your control, and it does both handily, provided you have the turns to draw it. Additional card draw is always a welcome addition to any Commander deck, and that goes double for decks running Approach of the Second Sun, as each additional card draw is theoretically a turn skipped before you get to cast it again and win!

One last thing I would like to touch on before I go is the "New Commanders" section on the Silverquill Statement Precon Upgrade Page. This page lists the deck's face commander Breena, the Demagogue, its secondary commander, Felisa, Fang of Silverquill, and a third legend, which is from Strixhaven proper...

I think it's important to mention Shadrix as a potential upgrade to Breena. When using Breena, you're entirely at the mercy of the table in terms of whether or not her ability will trigger, even if she can trigger multiple times in a round. If you play the game of politics well, or if your playgroup indulges it, you'll be rewarded handsomely; if you don't politic well, if your group catches on to your plans, or if you end up in a 1v1 scenario, Breena doesn't amount to much more than a measly 1/3 flier.

Inversely, while Shadrix Silverquill only triggers during your turn and will help all of your opponents, the difference is that you can rely on Shadrix's ability triggering each turn, and you can tailor your political gifts depending on what each of your opponents wants or needs. Where Breena gives your opponents control of your deck and how it functions, Shadrix puts you back in the driver's seat and allows you to make whatever decision is best for you at the time.

What are your thoughts, though? How do you feel about these changes to Silverquill Statement or about EDHREC's Precon Upgrade Page in general? What about choice of commanders? Would you stick with Breena, the Demagogue for this list, or will you be making the swap to Shadrix Silverquill? I'd love to hear you thoughts down below, and if you would like to see more tune-ups of preconstructed decks! Make sure to let me know!