Archetune-Up - Thief of Hearts (and Creatures)

Hello, and welcome back to Archetune-Up, the article series devoted to tweaking a deck with the help of the EDHREC Theme pages!

It's February! A time to express your love and appreciation to that special someone or someones! So... it would be a shame if someone were to steal all of these wonderful feelings, no?

Don't worry, though. While Brion Stoutarm plans to steal the hearts of all your creatures, he has no qualm about returning them to you promptly... though, when that happens, love won't be the only thing in the air, so heads up!

I don't know what to say about the average Brion list except that it's exactly what you would expect. It's got big creatures, Threaten effects, and an pretty awful mana curve.... 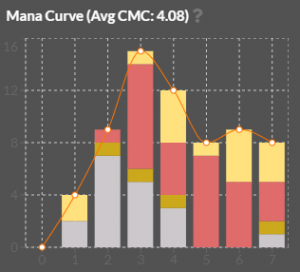 An average CMC that's over 4.0 can be a bit rough as is, but this deck takes that issue step farther, having only 35 lands and about 7 mana rocks.

This means that on top of assisting Brion in his goal of stealing as many hearts as possible, I also want to smooth this curve out a bit more too. We don't have to drastically change it, but making it a less top-heavy and giving it more flexibility would go a long way in making it more cohesive.

For this deck, I wanted to utilize the Theft Theme, as it would have the highest density of cards that would help me in my pursuit of thievery. Sadly, Boros was not one of the supported color combinations on this theme page, Since Brion is the only Boros commander that dabbles in this kind of strategy.

Due to that, I made the decision to use his personal Theft page. I try and avoid using commanders' personal pages when I can since it feels a bit like cheating, but I think it's important to point out when using the Theme Pages, themselves, aren't feasible. A nice benefit from using Brion's page directly is that it will increase the number of cards that synergize with Brion himself as opposed to just cards that simply assist in pushing the theme.

I do my best to keep my tune-ups to a "ten cards in, ten cards out" philosophy, but I wanted to make sure to fix some of the bigger issues that the deck had. While I wanted to start digging in and strengthening the deck's theme, that means nothing if the deck can't function properly. To this end, the first thing I did was add two more lands, bringing the count up to 37. I also threw in Fire Diamond, Marble Diamond, and Heart of Ramos for some more early game ramp and because I couldn't resist the idea of stealing Ramos, Dragon Engine's heart as well. ❤️

Those weren't the only changes that I made in an effort to help smooth this curve out, though!

The Modal Double-Face Cards, or MDFCs, from Zendikar Rising were a complete game-changer in terms of how decks operate and are built. I was quite high on them from the beginning, but they blew my expectations out of the water. Here is what I had to say about the MDFCs in my Zendikar Rising Black Set Review:

These Modal DFCs are better than they seem, and they already seem reallygood They are Magic‘s answer to mana flood and mana screw, something the game has been searching for since its first expansion.

There is no hard or fast rule to building with these cards, but this is my current thought process without having them:

My thinking on the MDFCs has changed over the past few months, and while I don't entirely rescind my initial assessment, I am happy giving myself an L on this one.

As of right now, I believe that you should never swap the MDFCs out for lands, unless it's an incredibly niche situation. If you always count them as spells, you are able to fit a handful of extra lands into your deck, which is so incredibly important for how the deck functions. Do not underestimate how much weight these cards pull. If you haven't used them yet, you are doing yourself a disservice, and I suggest that you become well-acquainted with them as soon as you can.

This deck was already running Kazuul's Fury and Song-Mad Treachery, two cards that I initially planned on adding before I even saw the list. Those weren't the only two MDFCs on Brion's page, though. Valakut Awakening and Sejiri Shelter have made their way into Brion Stoutarm lists, too.

Valakut Awakening is the epitome of a smoothing card. Either it's a land when you need it, or it refreshes your hand if you don't have enough gas. It was exactly what I was looking for! Sejiri Shelter doesn't reach the same height of smoothing that Awakening does, but it does provide the all-important dichotomy of being a land drop, or a spell that protects Brion. He is our main gameplan, so any flexible spells that help him stay alive as long as possible are welcome.

Now, with all of the "vegetables" out of the way, let's dig into the meat and potatoes of the deck!

Brion is looking to steal hearts, so a critical mass of Threaten spells is necessary! In Magic's long history, there have been a ton of spells that temporarily steal opponents' creatures, and only the best will do!

I know we just talked at length about smoothing the deck out, but I am not done yet. Limits of Solidarity may seem like just an over-costed Act of Treason, but I will gladly pay the extra mana, as it has the option to Cycle! Steal spells may not always be relevant, especially depending on the decks we're facing. As such, having one that we can pitch and replace with a fresh new card is fantastic and shouldn't be underestimated.

The lack of Traitorous Greed on Brion's average list shocked me. All steal spells in this deck come with a one-mana "tax" due to Brion's cost to activate his Fling ability. Traitorous Greed sidesteps this by immediately refunding two mana, providing Brion with the postage necessary to send their creature flying back to them in first class!

The final spell in our roguish repertoire is some old school spice: Insurrection! Sometimes stealing a single creature's heart isn't enough. Brion is a big guy and has a lot of love to give. In a sheer display of confidence I could only dream of, Brion can captivate every creature on the board and utilize their newfound feelings to knock some heads. In the original version of this list, running Insurrection would have been nearly unthinkable due to the rough mana curve. Thanks to the readjusted curve and additional ways to smooth the deck, I now think it's a great inclusion and a fantastic way to close out games.

Love is fleeting, and so is my time here, so I'm going to kick it into high gear and quickly go over the last half of the included cards. That way maybe we'll have time for coffee? Maybe lunch? I know a great hibachi place-

Wait, we can figure the details out later! Let's finish it up here!

There we have it! A lovely little list with our very own Casanova at the helm!

This was quite a fun list to put together! Brion Stoutarm is not a commander you see nowadays, what with all the Chulane, Teller of Tales, and Muldrotha, the Gravetides running around, but don't let that fool you: Brion has a plethora of different options for deckbuilding at his disposal.

Yes, he is in Boros, and yes, he doesn't inherently provide nauseating amounts of value on his own, but the cards available to him are no joke. From powerful damage-doublers like Gratuitous Violence, life gain payoffs like Angelic Accord, or even cheeky synergies with cards like Brought Back, Brion Stoutarm is sure to show you a good time no matter how you choose to build him.

What do you think, though? Are there any Theft synergies I missed? Any you might have added? Would you have picked an entirely different commander for a Valentine's-Day-themed article? Did you actually want to go grab some hibachi? Make sure you let me know down below!

Until next time, you can reach me on Twitter (@thejesguy), where you can always hit me up for Magic- or Jeskai-related shenanigans 24/7. Do you have any comments, questions, or concerns? Please don’t hesitate to leave them below or get in touch! Stay safe, wear your mask, and keep fighting the good fight. I support you. No justice, no peace.