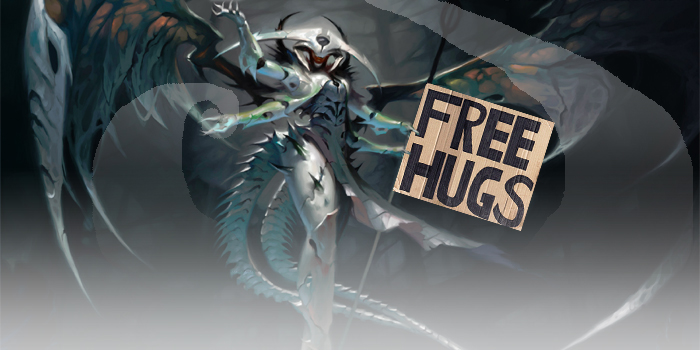 Once again we find ourselves at another installment of Power Sink, the article series where we help commanders weather their reputations and find clear skies and new horizons. This time we have a forecast for Atraxa, Praetors’ Voice.

Atraxa is the current #1 commander on EDHREC at the time of this article, with 7,460 decks. While I don’t think she draws the ire she used to, especially in the face of *gestures vaguely at 2019 commanders*, she has still managed to hang on to much of her old reputation. Even today, players will groan at the mention of Atraxa Superfriends.

As a commander, she still has a lot going for her. Proliferate serves a wide variety of strategies, and while planeswalkers, +1/+1 counters, and Infect are most common, there’s a wide variety of other counter cards available to her. Her keywords even make her a nightmare in combat. Deathtouch makes combat an unattractive proposition, while flying and vigilance make it easy to attack with impunity. Lifelink may seem like just icing on the cake, but that extra life can give you the time to deploy a slower strategy. Having four colors gives her access to nearly every card in the format. The best in ramp, draw, removal, tutors, countermagic, and recursion are all available to her.

Atraxa’s average deck on EDHREC is a little unfocused, representing common cards from her most common strategies, with a heavy focus on planeswalkers.

Doubling Season does a lot of heavy lifting in Atraxa decks. At its base setting, getting twice as many counters is powerful, but it also enables many planeswalkers to activate their powerful ultimate abilities the turn they’re cast. Even without Doubling Season there are plenty of available effects to add counters, like Evolution Sage, Inexorable Tide and Deepglow Skate.

Planeswalker emblems, like the ones from Narset Transcendent, Tamiyo, Field Researcher, and Teferi, Hero of Dominaria, are downright backbreaking in a game, and even more temporary effects, like what you get from Ugin, the Spirit Dragon and Teferi, Master of Time, can be game-ending. Other planeswalker support cards make an appearance here, such as The Chain Veil, Oath of Teferi, and Carth the Lion.

Outside planeswalker synergies, we see a few cards that fit into Atraxa’s other common deck theme. Ichor Rats gives each player a poison counter, which Atraxa can Proliferate, putting a clock on the game for her opponents. If you’re handing out +1/+1 counters, Corpsejack Menace will give you twice as many. Toxrill, the Corrosive is a recent but powerful addition to the average deck. Atraxa can Proliferate those slime counters, and since both effects trigger at the ends step, opponents are looking at -2/-2 for each of their creatures after one turn, and it won’t be long before everything else goes.

I think we’ve cleared up the reasons for Atraxa’s reputation, so it’s time to take a look at what we’re doing to Power Sink this commander.

It’s been quite some time since I’ve done this, but I’ll be using one of my own decks rather than brewing something for the article. This means that the deck is going to be somewhat pricier than what you usually see from this series. The deck I’ll be showcasing is a cross between Group Hug and ‘Turbofog’, and it seeks to win by drawing or milling my opponents. The deck was initially inspired by Commander Cookout Podcast, episode 7, but I’ve been making changes since I built my deck in 2018. Let’s take a look at the list below!

In Fog We Trust

Spells that negate damage, or “Fogs”, are one of this deck’s primary defenses. Even with a Group Hug deck, politics will only get you so far, and some players will target you just for playing the strategy. The original Fog is outclassed by other options, but I have a foil from Core Set 2012 that looks nice, so I keep it in the deck. More noteworthy entries in this section include Riot Control, which prevents all damage to you, not just combat damage, and has to potential to gain a ton of life. Comeuppance will return any damage back to sender, which is particularly great if someone tries to fire an Aetherflux Reservoir. Blessed Respite is useful to deal with a troublesome graveyard or to reshuffle desired cards back into my deck. Sudden Spoiling is useful as a Fog, but it has the added benefit of shutting off dangerous creature abilities.

One card that is noticeably absent is Constant Mists. When I set out to brew a deck, one of the first things I do is outline the kind of experience I want myself and my opponents to have when playing the deck. While running it would certainly help me win more games, I think opening myself to the possibility of running out of Fogs and losing to an alpha strike creates a fun dynamic in the game, while Constant Mists is often just game over for combat-focused decks. Inkshield is another Fog I’m not running that you would expect to see here. It’s a great card, but I think it would be easy to see coming with so many other Fogs in the deck. Besides, I’m trying not to win with combat here.

I like to think of this deck as a celebration of the cool decks my friends have, and as such it is designed to make the other players see every single card in the deck they meticulously put together. At first glance it would seem like Atraxa doesn’t add much to this strategy, and that’s not entirely wrong. For the most part, Atraxa is there to add counters to mana rocks, like Pentad Prism, Astral Cornucopia, and Empowered Autogenerator, or to add counters to storage lands, like Calciform Pools and Saltcrusted Steppe. The plan from there is to dump all that mana into a spell like Prosperity or Minds Aglow.

Aside from mana production, though, Atraxa can also Proliferate counters on Walking Archive and Otherworld Atlas to draw more cards for everyone. If there’s a card I really want, Wishclaw Talisman can find it for me, and Atraxa can keep counters on it to keep in in the game. Naturally I’m running other Group Hug staples too, like Howling Mine and Forced Fruition.

With all this card draw, I’m running Folio of Fancies and Price of Knowledge to spare my friends the inconvenience of discarding to hand size. Graveyard players aren’t left out of the fun either, what with Mind Grind, Court of Cunning, and Psychic Corrosion. Oh, and with all the help I’m giving my friends, hopefully they don’t mind me slipping that Smothering Tithe onto the table.

While the plan A is to give everyone cards, I’ve got a cute little three-card infinite combo to finish a game if Plan A doesn’t work. Keeping with the theme, it’s all about my friends’ cards. If I cast Jace, Architect of Thought with Doubling Season out, I can immediately use Jace’s ultimate ability, and if I do that while enchanted by Wheel of Sun and Moon, Jace goes to the bottom of the deck, and I can recast him with his own ability, along with a card from each other player. This can be looped until I’ve cast or exiled every single nonland card out of my friends’ libraries, and while that technically doesn’t win the game, only the most stubborn players are going to keep going after that!

This is one of my favorite decks in my collection, and while it can hand the win to my opponents, it enables some crazy game states that are fun to lose to as well. I certainly could make stronger card choices, but I think for any deck it’s important use cards that stay true to the experience you want for that deck, especially when brewing with powerful commanders. Otherwise you may end up with just another version of “that deck.” There’s nothing wrong with wanting a deck to win as much as possible, but you need to be honest with yourself, as well as others, if that’s what you’re doing.

(PS: if Group Hug isn’t your thing, I also play an Atraxa Thallids deck, and that’s another pretty suitable Power Sink, too.)

Once again, thanks for reading. Let me know in the comments what you think of the deck, and if you have (or have encountered) any other unusual Atraxa builds!