Hello, and welcome to Challenge the Stats, the series based on the segment of the same name on the EDHRECast, where we highlight cards that we think are overplayed, underplayed, or sleeper picks to accompany EDHREC’s data. However, personal card choices made by you, the deckbrewer, such as for flavor, budget, art, or fun, are always most important and are what keep our format unique and awesome.

Last article, readers voted on Arixmethes, Slumbering Isle. For some fun Arixmethes lore, check out this article by Eric Seidl. 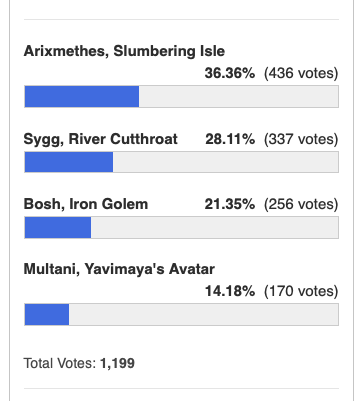 One initial observation of the data is that we're seeing 352 Sea Creatures decks out of a total 1,354 Arixmethes decks (at time of writing). That's only about 25%. However, we're seeing Sea Creature tribal cards showing up at very high rates, e.g. Whelming Wave (82%), Slinn Voda, the Rising Deep (76%), and Serpent of Yawning Depths (72%). Yes, our commander is a Kraken that will benefit from these cards, but I think that we're seeing a lot more than 25% of Arixmethes decks that should have the Sea Creatures theme but don't necessarily make the tribal cutoff of having 60% Sea Creatures. This is evidenced by the rest of the creatures in the High Synergy section being various Sea Creatures that show up in about 60-70% of Arixmethes decks. There are also a lot of support creatures on Arixmethes' page that could lower the density of Sea Creatures. With that said, let's just go ahead and challenge all 1,356 decks together since no other themes are represented heavily.

You can see how often cards are currently played in parentheses (%). Here we go!

Is she just here for flavor as the Sea Creature planeswalker? If not, this Kiora has a bad case of "ultimate blindness", as in her ultimate is so juicy that we overlook every other bad aspect of the card. She comes in with only two loyalty and will take four turns to ultimate, assuming she's not damaged. The +1 protects herself from one thing, not one thing from each of three opponents, and the -1 is an Explore. Either we're on the track to ultimate and our opponents will see it coming from a mile away, or we Explore and leave her vulnerable to a 1/1 flier. I really like Kiora's other versions, though, since Kiora, Behemoth Beckoner and Kiora, Master of the Depths both synergize with Arixmethes to give us ramp as well as providing card draw.

If our opponent removes our creature we target with Soul's Majesty, we don't get to draw any cards and we've lost our biggest creature. There are several new versions that don't target and reduce the chance we'll get blown out. Most recently, we've seen Return of the Wildspeaker, but we can also look to Garruk, Primal Hunter, Rishkar's Expertise, and Prime Speaker Zegana. Don't forget about Greater Good! In a recent article about Arixmethes, Bennie Smith pointed out the nifty little interaction between Greater Good and Ominous Seas: Make a Kraken, sac' it to draw 8 and discard 3, rinse and repeat!

Let's continue this train of "card draw I don't like". I have a hard time getting on board with Shamanic Revelation in decks like this. If we're going wide and are able to pump out lots of creatures easily, Revelation is going to be a reliable source of draw, but when our creatures are big and expensive, Revelation can easily be dead in our hand. There's no worse feeling than getting boardwiped and only having a Shamanic Revelation in hand. Don't be lured in by the lifegain: choose draw cards that can help you get out of a rut when you're behind!

Speaking of that Ferocious ability, I wanted to mention a few other cards. We will be able to trigger that relatively easily, so let's dig into other options. Stubborn Denial is a great counterspell. If we kick it up another notch to Formidable, which we should also be able to easily do, we unlock more good options! Shaman of Forgotten Ways is solid ramp and a win condition in itself, and Stampeding Elk Herd is a great way to give our creatures trample.

Cards that allow us to play our Sea Creatures at instant speed are really good for us. Being reactive means that we can dodge removal and board wipes, give our creatures pseudo-haste, and hold up responses at the same time as our Krakens. Vivien is currently much cheaper on the wallet than a Vedalken Orrery or even a Leyline of Anticipation.

One sneaky little sleeper I found is Metathran Aerostat. The mana demand might bar it from higher power level groups, but putting down an overcosted 2/2 flier that can flash a big Sea Creature into play without needing to tap seems like some neat tech. With the Aerostat, we essentially pay five mana to cast one creature at flash speed, and Alchemist's Refuge does that for three mana, so why not both? Okay, that's a big jump, but we have infinite mana potential in our deck with Pemmin's Aura and Freed from the Real, so we can potentially dump every creature in our hand with Metathran Aerostat at flash speed.

We can also look at cards that put creatures directly into play at instant speed. Kinnan, Bonder Prodigy does this and also can offer some extra ramp, especially once Arixmethes is a creature. If we're leaning heavily into one of the Sea Creatures tribes, such as Krakens, we can use Belbe's Portal, or to give us a bit more flexibility we can use Elvish Piper and Quicksilver Amulet. Even Tidal Barracuda is showing up on the page (What do people think of this card?).

One final card that warrants some words is Myojin of Life's Web (just reprinted!). Since we're a ramp deck, we'll definitely be able to afford to hard-cast it, and once we do we'll be able to put into play any number of doozies from our hand at instant speed.

We really want Arixmethes out by turn three since that gives us access to seven mana by turn four, allowing us to cast most of our Sea Creatures. To do this, ramping on turn two is important, and I'm happy to see a lot of this already on the page, such as Rampant Growth (69%), Farseek (50%), and Sakura-Tribe Elder (41%). Surprisingly, I'm seeing a lot of mana rocks, such as Simic Signet (60%), Talisman of Curiosity (33%), and Arcane Signet (25%). Maybe there are some untappy shenanigans that people are using these for, but I'd rather have cards like Edge of Autumn and Search for Tomorrow (10%) instead.

I don't think I've challenged a card based on flavor before, but here it is! I don't need to convince you that Mystic Remora is good at drawing us cards; I'm challenging this little fishy on flavor and function! Doesn't it look like a cute little baby Leviathan or Nezahal, the Primal Tide? Similar to Nezahal, this will draw us tons of cards. It's not the easiest on the wallet, around $5, but that's way better than $20 for Rhystic Study for a similar effect. Plus, it's 53% less annoying than Rhystic Study.

We're playing lots of big creature spells, and we don't want them countered! Sure, we can play our own counterspells, but with our rampy-stompy strategy, it can be trickier to hold up mana for a counter after we've tapped out for a big Kraken. Also, check out the new Allosaurus Shepherd (once we get more Jumpstart cards and the price drops). A budget version is Destiny Spinner, although as an uncommon from a recent set it's already over a dollar, so pick one up pronto!

I think a lot of players are using cantrips to get those slumber counters off. I like Clockspinning because it changes the math, especially later in the game. Early on, we can speed things up by taking off two counters, and later we can sink lots of mana into it to get those counters off quickly. Our opponents might think it's impossible for us to quickly replay Arixmethes and get all those slumber counters off with only one card in hand, but for just five mana we can take four counters off with Clockspinning, and for nine mana we can get all the counters off. Or, you know, use it to kill a planeswalker.

Cards that untap a permanent are essentially ramp spells for us since we can untap Arixmethes. Players are catching on to this, as we can see Kiora's Follower being played in 72% of decks, and all of the Kiora planeswalkers, themselves, untap cards. In that vein, Minamo, School at Water's Edge (6%) is an underplayed card for us, but this is the sleeper section!

Let's expand on this idea and look to Vizier of Tumbling Sands and Fatestitcher. These cards add to our board but have extra utility by also being ramp spells, and the Vizier can cycle itself essentially for free while untapping our commander, and Fatestitcher can help us out on defense as well. Consider putting these in instead of Explosive Vegetation variants, since we already have one of those in the command zone!

We can expand on this idea and include more cards that untap Arixmethes while it's a land; Voyaging Satyr is played in 40% of Arixmethes decks. Krosan Restorer fills a similar role, but at three mana we have the issue of it not being able to help Arixmethes out on turn three. Stone-Seeder Hierophant might be worth an inclusion, though. It will likely give us two untaps and net six mana with Arixmethes per turn! We can even throw in a couple of other lands that tap for two if we're including several of these cards.

I want to give a shoutout to Mason Brantley, who made this pick in his Arixmethes article, which you should check out! Curator's Ward can give our commander hexproof regardless if it's a creature or a land, and we'll draw two cards if it leaves the battlefield. This is going to do some work preventing major feel-bads from our commander from being Strip Mined right before it wakes up. Let's get Curator's Ward on the page!

Are there any other cards you would challenge? Let me know in the comments below! Do you think you have a good challenge for the next Challenge the Stats? As always, you can find me on twitter @jevin_mtg or shoot me an email @ jevinlortie@gmail.com.