Hello, and welcome to Challenge the Stats, the series based on the segment of the same name on the EDHRECast, where we highlight cards that we think are overplayed, underplayed, or sleeper picks to accompany EDHREC’s data. However, card choices made by you, the deckbrewer, such as for flavor, budget, art, or fun, are always most important and are what keep our format unique and awesome.

Last article, readers voted on reprinted commanders from Zendikar Rising. This was a nailbiter, folks. Sygg was hot on Lazav's heels by 2 or 3 votes for many days, with Gonti not far behind (sorry, Multani, I <3 U). 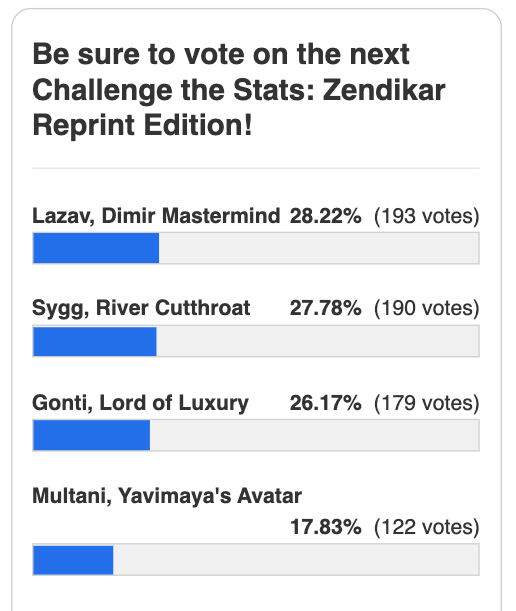 Lazav wants us to mill our opponents so that he can clone their creatures that go to the graveyard. The challenge is that Lazav lies in the space between being an effective mill commander and a reliable voltron commander. However, what he does bring to the table is a flexible gameplan that can pivot to different strategies depending on the situation, making this deck shine at a casual table.

Lazav also got a power-up with the new commander death rule change, making it easier to copy our opponents' commanders!

We're going to challenge the data from all 650 Lazav decks at the time of writing, and you can see how often those cards are played in parentheses (%). Here we go!

On Lazav's page, we see a common theme of playing our opponents' cards beyond using their graveyards, whether that be with more Shapeshifters or by exiling them with cards like Thief of Sanity or Hostage Taker. These are more for personal taste than they are for synergizing with Lazav. I'm not going to challenge them, but be conscious of these preferences when building from the page.

This challenge hurts. I really like Mirko's flavor, but I'm struggling with cards that mill post combat damage. In the same way, I also want to love Sword of Body and Mind (15%), the under-appreciated Sword of that actually kind of works with our deck. The problem here is that these mill after Lazav has dealt damage, and then Lazav sits there looking scary for an entire turn cycle while our opponents figure out an answer. I want our play pattern to look like: 1. Mill with Lazav out, 2. Lazav gets scary, 3. Lazav deals damage, in that order, and preferably all in the same turn.

On the other hand, Nemesis of Reason and Trepanation Blade trigger on attack, meaning Lazav can transform during combat and deal damage as a fully realized Avata – I mean – Shapeshifter.

Okay, there are plenty of over-costed cards that have a tiny bit of incidental mill tacked on. Let's really think hard about whether that extra price is worth it. First of all, tiny bits of mill are just okay, but what we really need are big chunks of mill. When we mill big and immediately swing with Lazav, we reduce the chances that our opponents will get time to use their graveyards against us or remove our commander. Secondly, reducing our mana curve is simply going to help us be more efficient. Extract from Darkness is a prime example of one of these over-costed offenders. Five mana to reanimate a creature is way too much. Potentially milling two cards for each player in the process isn't better than the efficiency we get from Reanimate (just reprinted!), Animate Dead, and Necromancy. Even in budget decks, I'd rather have Dredge the Mire, Boneyard Parley, or Sepulchral Primordial.

I am 100% behind playing cards for flavor, but it should be said that Lazav has had a change of heart about his strategy. Lazav, the Multifarious (AKA NuLazav) targets our own graveyard, and we're not building our deck around milling ourselves or having good targets for that ability. In fact, most, if not all, of our mill cards target/affect opponents only. So, if we're not interested in flavor, let's let NuLazav get up to his Multifarious schemes in a different deck.

Patient Rebuilding is a pet card of mine that I'm always looking to include in a deck. This is that deck! It's a slightly over-costed Phyrexian Arena-type card with potential upside that also mills our opponents. The potential upside is – drum roll please – drawing 2 or 3 cards instead of 1...

I can now confirm... this card is Paradox Engine good.

Okay, I'm being facetious, but give me a chance to show you why I like it. Let's go to the STATS.

Thanks to Lord_Naikon on Reddit for doing the math. We can see that we'll hit two or three cards about one-third (33%) of the time. Yes, about one-fifth (20%) of the time we will whiff, but let's play Magic to feel alive! This card is going to average out to give us a little over one card per turn, which is better than Vegas odds. And then about six percent of the time, you'll draw three cards off Patient Rebuilding, and then you can call your mom and she will be proud of you. It's the elements of randomness, chaos, and excitement that Patient Rebuilding brings to the table that I'm all about.

We have oodles of ways to mill our opponents, meaning that we have anti-tutor-to-the-top-of-library tech. By simply milling our opponent after playing Scheming Symmetry, we now have a Vampiric Tutor that only costs $3. Or, you know, we can play politics if we feel like it, but having the option not to is great.

I know Darksteel Plate is pricy right now, and I'm going to offer some budget alternatives as well (Hammer of Nazahn just got a reprint). Having innate hexproof is powerful, and if we combine that with indestructibility and/or regeneration, our opponents will have a devil of a time getting rid of Lazav; they'll need a mass exile effect like Winds of Abandon or Extinction Event. Another great option is Gift of Doom, which I'm surprised to see is still very budget-friendly!

Regeneration is a soap-box I've been on many times before, but it gives us the same effect as indestructibility, so if we're looking for additional Darksteel Plate effects, let's look at Soul Channeling, Blessing of Leeches, Skeletal Grimace, and Strands of Undeath.

Grinning Totem lets us grab the best card from an opponent's deck. We can choose to cast it if we want, but if we don't, Lazav can become a copy of it when it hits the graveyard. This effect is a bit expensive, but it's also incredibly powerful. We can search up an instant or sorcery if we need to, say, get rid of something or wipe the board. Otherwise, we can just tutor up a big creature and let Lazav assume its shape when it ends up in the graveyard.

I don't see much graveyard hate on Lazav's page, and it's easy to understand why: Lazav doesn't get rid of the creatures he copies. This is great, because we can reanimate them later, but so can our opponents. We need to pack more graveyard hate than anyone else so that we can threaten to stop them if they try any shenanigans. Because we also might want those cards, I'd prefer reactive and specific graveyard hate. I'm talking about Scavenger Grounds, Withered Wretch, Tormod's Crypt, Crook of Condemnation, and Bojuka Bog. I don't want too many graveyard hate cards that get rid of all graveyards since I want some goodies after the dust settles, so I'm going to leave out Relic of Progenitus and Soul-Guide Lantern this time, but it certainly isn't wrong to play them.

Maybe it's not fair for me to challenge a brand new card, but there are so many versions of this effect and only one of them shows up on Lazav's page: Thought Erasure (13%). So, I'm really challenging all of them, but Pelakka Predation is my favorite.

Selective discard is a great way to give Lazav some good copy targets earlier in the game or when we know that our opponents probably have a bomb in hand. Maybe they've been holding on to something or maybe they've just drawn a ton of cards.

Selective discard can be very mana-efficient if we only want to hit creatures, such as Ostracize, Despise, or Harsh Scrutiny. If we want to be a bit more flexible, we might be able to stop an opponent from winning in other ways (such as, if they just Demonic Tutored for a Torment of Hailfire) with cards like Toll of the Invasion, Pelakka Predation, or Lay Bare the Heart. These effects are situational, so Pelakka Predation gets bonus points for being on a land.

Odds are, if we're looking to protect Lazav, he's transformed into something dangerous, so I dislike cards that we see on his page that force him to reset, like Malakir Rebirth (20%) and Minion's Return (9%). Vanishing provides additional protection from board wipes but allows Lazav to stay shapeshifted as the Eldrazi or Praetor they've turned into.

I think it's about time for a decklist, don't you?

If you'd like to read more about Lazav, check out this Commander Showdown article by Joey Schultz where he pits Lazav against Lazav.