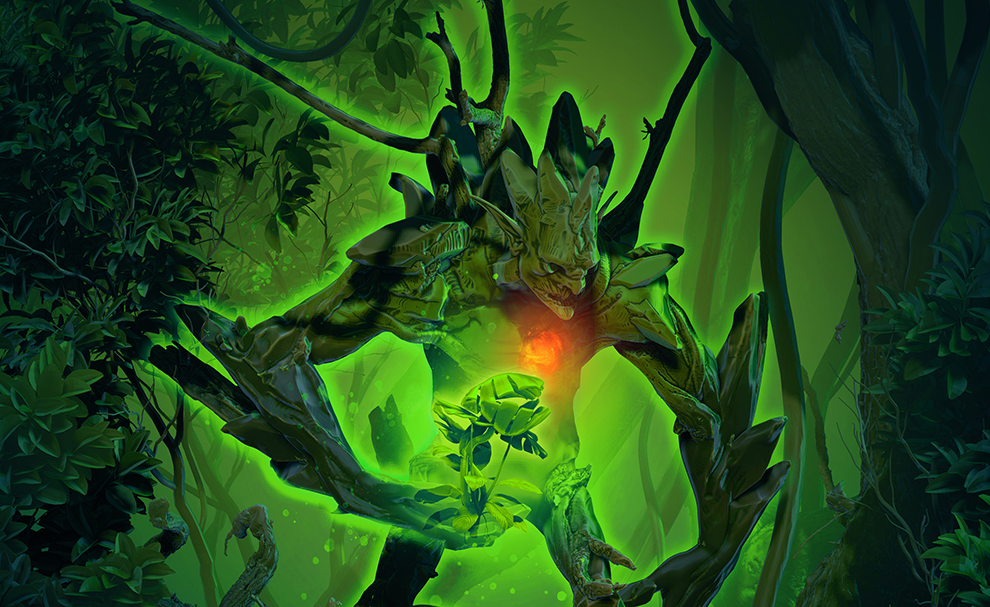 This week, we're talking about Phylath, World Sculptor. Phylath has been in my 'to build' pile for a long time. I like Phylath as a 'red eye deck', a term I first heard from EDHREC writer Jeremy Rowe. It means a streamlined, hyper-simplified deck, that does one thing and does it well. I like this playstyle because it helps me be more present with my friends since I don't need to dedicate so much brainpower to piloting the deck. 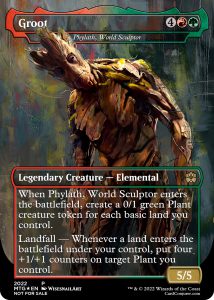 (Check out this terrific alter by @ImKyle4815 on Twitter!)

We're challenging the data from all 750 Phylath decks at the time of writing, and you can see how often those cards are played in parentheses (%). Here we go!

I feel like every time I talk about a green commander I end up challenging a mana rock. Sorry if this is repetitive, y'all, but it's still happening, so we're still talking about it. Our commander cares about having basics in play, so a mana rock instead of land ramp is anti-synergy! We have plenty of options these days that are functionally Arcane Signet but with lands. Nature's Lore and Three Visits give us lands that are untapped, and Farseek, Into the North, Rampant Growth, Edge of Autumn, and Emergent Sequence give us lands that come into play tapped.

Our commander costs six mana, so we can also look at 3+ mana value land ramp before reaching for Arcane Signet. Don't be afraid to reach for your Cultivates, Kodama's Reaches, Dire-Strain Rampages, and others!

We have Plant synergy, so if we're going to grab nonland ramp, how about making it Plant ramp so we can stack counters on it? Sylvan Caryatid protects itself, so we can pump it up without worrying about it getting removed before we Fling it at someone's face! Ilysian Caryatid easily taps for two in our deck and doesn't have Defender, so can turn into a threat itself.

I'm a fan of more unique ramp as well. At more casual tables we can look at group hug cards like Clear the Land, Collective Voyage, and New Frontiers because we're going to break symmetry on them! Our opponents might just run out of basics in their deck and not get any benefit from these cards.

Are we still into Courser? I don't like my opponents knowing what's coming up next, and we have better top-deck options nowadays that don't reveal the cards. In a recent game with Mike Carroza of Commander's Herald, he flipped a Torment of Hailfire off his Prosper trigger and the rest of the table promptly killed him, whether he deserved it or not. You can bet when Courser reveals my Chandra's Ignition or Scapeshift, I'm not lasting until my next turn either.

For playing lands off the top, we have Augur of Autumn and Radha, Heart of Keld, and how about Druid Class for some incidental lifegain? Courser isn't making my cut anymore, but let me know in the comments below how you feel about it.

This is my new favorite flexible ramp/removal spell. It's a sorcery-speed Roiling Regrowth, which is a perfectly acceptable card; we see Springbloom Druid in almost 40,000 decks, and this has a similar effect. However, if we need to deal with a threat, we can destroy an opponent's artifact, enchantment, or land instead. Sure, they get a land in return (or two, if we destroy their land), but Assassin's Trophy also ramps our opponent, and in casual pods, that likely isn't going to make or break the game.

The downside of a ramp spell is usually that it's less useful if we draw in late in the game (albeit less so for Phylath). However, having our ramp double as removal means it functions in more crucial quadrants of the game–when we're developing, behind, ahead, or at parity. Oh, and by the way, it has Flashback! That means in any given game, it not only functions in any quadrant, but can also play multiple roles in different quadrants.

I see the play pattern for this card most often being early-drawn ramp with later Flashback removal or late-drawn double removal.

One of the problems Lands decks often run into with all of our Exploration effects is running out of lands in hand. You Happen On a Glade is an instant-speed draw two lands or a pseudo-Regrowth, which is fantastic versatility.

Sword of Hearth and Home is great in many decks, but it's especially good for Phylath. When we deal combat damage, we can blink Phylath to have its ETB sprout us another fresh crop of Plants, and stack the triggers so we also get four more counters from the land entering! A few people have caught on to this trick, but hopefully more than 9% will start including it in their lists.

This cute little Orc sadly gets left out of a lot of Lands decks, but with his help, we could have a turn-three Phylath! Sure, we might only have two Plants, but come on, turn three Plylath!

Sweet Christmas, this card is an awesome win-con that should see more play! Our deck is stacked with fantastic instants and sorceries. Often, this will just be an Overrun for all of our little Plant friends. As a worst-case scenario, we exile a Cultivate to give all of our creatures +3/+0. Then, when any of them deal combat damage, we'll get to ramp! Okay, that's just the floor - how about exiling a Beast Within for mass targeted removal, a Rishkar's Expertise to draw a boatload of cards and cast them for free, or a Treacherous Terrain to probably just win the game?

Speaking of interesting win conditions, Mercadia's Downfall is one of my favorites. Shout-out to Dana Roach for clueing me in on this one. It's an instant-speed mass pump spell, which means we can use it after blockers are declared, or even on an opponent's turn if they're attacking someone else and we want to help them out. People play tons of nonbasics these days, so this will regularly give at least +3/+0, and usually a whole lot more.

Seriously, how funny will it be to attack with all of our 0/1 Plants, just as a power move to make the table laugh, and then pump them up a whole bunch before damage?

Are Treasures running rampant in your meta? Titania's Song to the rescue! They're all instantly gone, and it also prevents the creation of more Treasures! I've definitely been running Viridian Revel in all of my green decks to great profit, and this fits a similar bill. In a deck that doesn't have many artifacts, or that plays none at all, Titania's Song can be much more effective than a Vandalblast.

This card doesn't see much play, just ~1200 total decks, and those are probably higher power and cEDH lists. However, I think it's a hilarious extra turn spell and it's on-theme with our Plants! Sometimes it'll be a dead card if there are no blue players at our table, but if there are, and anyone tries to counter our spells, or the blue player is simply next to us in turn order doing shenanigans at the end of our turn, we'll have the best 'gotcha' moment of all time!

What do you think about these challenges? Are there any other cards you would challenge? Let me know in the comments below! As always, you can find me on twitter @jevinmtg.