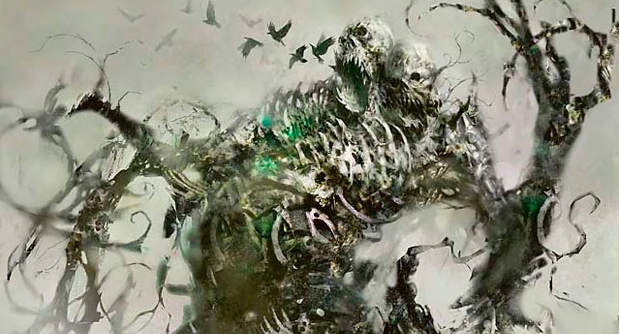 Welcome to Challenge the Stats! This series is based on the awesome EDHRECast segment where we pick out cards that we think are overplayed, underplayed, or sleepers to challenge EDHREC’s data. Remember, these are merely comments on the data, and card choices made by you, the deck brewer, for any reason such as flavor, budget, art, or fun, are always most important and are what keep our format unique and awesome.

This week, we're challenging the stats for Skullbriar, the Walking Grave. 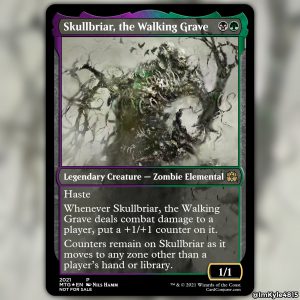 (Check out this sweet alter by @Imkyle4815 on Twitter!)

Skullbriar is a relatively old commander (2011), and with these we often see older cards sticking around in the data and newer cards struggling to gain traction. This likely comes from players not updating decklists often, or updating a couple of new cards but keeping many old holdovers that are now outclassed. EDHREC only takes data from decks that were created or updated in the last two years, so the data we currently have is definitely from decks that are being updated by their owners, but might not be getting quite the tender loving care they deserve, which is a shame, because Skullbriar got many new toys in the last two years to breathe new life into this old Zombie!

We're going to challenge the data from all 1,489 Skullbriar decks at the time of writing, and you can see how often those cards are played in parentheses (%). Here we go!

In the average Skullbriar decklist on EDHREC, there are 37 cards that target a creature we control! That's going to make protecting our commander while we pilot our deck difficult; sure, we can move the Greaves around to cast our spells, but you can bet that when we go to unequip Skullbriar's Lightning Greaves to cast a Visions of Dominance, our opponents are going to pull the trigger on whatever removal they've been holding up.

Your deck might be different than the average deck, of course, so count up how many cards there are in your own deck that target a creature, and see if it's worth running these shroud cards that would stop you from casting them. This is a good rule for a lot of other decks that auto-jam Lightning Greaves as well.

One card worth considering over these is Mirror Shield. Skullbriar doesn't need the haste of Lightning Greaves, and Mirror Shield provides hexproof instead of shroud, and we don't have to worry about our opponents' pesky deathtouch creatures standing in the way of our commander.

I think these are outclassed these days and may be sticking around in some decklists when there are better options out there. The +1/+1 counter on our upkeep is monumentally slow. As for the other abilities, we have several ways to grant trample in a more synergistic way, such as a trample counter from Titanoth Rex or Hornbash Mentor, or creatures that immediately give us a counter and trample, like Pridemalkin or Duskshell Crawler.

As for Regenerate, we now have several ways to give Skullbriar an indestructible counter, like Tyrite Sanctum or Daring Fiendbonder. The fact that we need to pay two mana to activate the protection on the Ring, in addition to casting and equipping it, makes it less efficient than one-shot cards like Professor's Warning (10%), Oblivion's Hunger (26%), and Inspiring Call (29%).

This may be a product of new cards taking a while to be included in an old commander's data, but there is a noticeably low inclusion of Zendikar Rising MDFC spells on Skullbriar's page. Many of them are really good in our deck! Malakir Rebirth (28%) is a useful spell in most black-inclusive decks, and Skullbriar has many similar cards on the page, such as Feign Death (53%) and Supernatural Stamina (11%). Khalni Ambush (10%) is a useful removal spell that also has similar cards on the page, such as Ancient Animus (28%). Hagra Mauling doesn't show up on the page at all, but it's a great removal option on a land. Finally, Tangled Florahedron is one that I'm a fan of because sometimes you need another body or a mana dork, and Vastwood Fortification (16%) gives us a little combat trick or just an extra counter if we're flooded on lands.

Most of these may not be worth a card slot on their own, but on a land they can really help us out when we're flooded. Having utility lands that tap for a color is especially useful to our deck because we can play them tapped on turn one and still play our commander on turn two.

Let me sneak in another slam-dunk from the latest Commander sets: Ruinous Intrusion (13%). At just two mana more than a Naturalize, we can stack up quite a few counters on Skullbriar while removing a threat. Bolas's Citadel or The Great Henge are dreamy targets for Ruinous Intrusion.

Garruk is a splashy draw spell along the lines of Return of the Wildspeaker (52%) and Rishkar's Expertise (42%). The vast majority of the time, we can just activate his -3 ability right away and draw a boatload of cards. Skullbriar draws enough attention that I'd also like to see higher numbers of draw spells that want to sacrifice it, like Momentous Fall (21%) and Greater Good (16%).

The First Iroan Games has a fantastic play pattern with Skullbriar. Every chapter is helpful for us. The first creates an extra body to protect against Fleshbag Marauder effects. The second beefs up Skullbriar to help it get in for damage in the early turns and keep building counters (potentially five counters by turn four!). The third draws us two cards, and the fourth ramps us. While yes, this is a bit slow, it's fantastic value, and each chapter is tailor-made to our gameplan.

I think a lot of decks are also snoozing on this card. That last line of text, "Whenever a creature with a +1/+1 counter dies, draw a card", is fantastic. It's probably even better in other decks than Skullbriar, but we'll make good enough use of it here. Our commander will get targeted enough for us to benefit from drawing when it dies, and we have plenty of other +1 counter creatures in our deck as well. On top of that, we're going to take advantage of the Shadowcat's sacrifice outlet to save our commander from being stolen or locked down by something like an Imprisoned in the Moon.

I love Fling effects, and black's versions are pretty neat, trading instant speed for life gain. In case we can't get through for combat damage, these can be an alternate way to knock out our opponents or pad our life total if we're getting low. Other notable versions include Essence Harvest, Dying Wish, and Jarad, Golgari Lich Lord.

Why do I like these cards? Let me answer that question with a rant and some bonus challenges!

These "Fling-ish" effects help make up for the fact that we are trying to win with commander damage. They allow us to attack one player and simultaneously deal damage to another.

Voltron decks can have a hard time closing games because they have not only the hoop of dealing damage but also some key weaknesses. The first weakness is edict effects, like Fleshbag Marauder. These are extremely hard to get around, and if we have one main creature, we're often forced to sacrifice it. In my own Skullbriar deck, I've tried to prevent this by including a lot of other creatures as a slight buffer, but the card Tajuru Preserver can also help prevent us from sacrificing anything (more effects like this, please, WotC!).

Skullbriar has another Achilles' heel, and that's -1/-1 counters. Those counters stay on Skullbriar, and if it gets enough counters to die, as soon as we replay it, it'll die again. A way to prevent this is with Melira, Sylvok Outcast. If we're having trouble with edicts or -1/-1 counters at our tables, it might be time to put these cards in, along with maybe some tutors like Dig Up or Chord of Calling to find them when we need them.

Beanstalk Giant certainly isn't the most efficient ramp spell, but we can make good use of the Giant later in the game. Our deck has plenty of cards that care about big creatures, such as the previously-mentioned Garruk, Primal Hunter and Rite of Consumption. Also, we don't mind ramping on turn three since our commander is likely coming out on turn two. While everyone else is ramping on turn two and three, we'll be hitting them with our commander and stacking those counters!

Give a little more weight to one- and three-mana-value ramp spells in decks where the commander is two mana value! Another one I like is Scale the Heights. It's an Explore that costs one more, but also adds a counter and a bit of life.

When considering board wipe value, specifically asymmetrical ones, I like to count up the mana costs of whatever permanents I got to keep in play. For example, if I cast an In Garruk's Wake and have five mana value of creatures on the board (a conservative estimate), that mana value difference is equivalent to a Damnation. It's also worth considering the card advantage we lose in a board wipe; in a symmetrical board wipe, we need cards in hand to redeploy, but if it's asymmetrical, we're already ahead. Asymmetrical board wipes, though more expensive, mean we don't have to replay cards, and we don't have to spend mana to redeploy them. In some situations, they also clear the way to win the game because one-sided board wipes also secretly say "your creatures are unblockable this turn".

I think Commander players need to break the hyper-efficient competitive mentality of "cheaper board wipes let me deploy first" and embrace asymmetrical/flexible board wipes that let us keep the massive board state we've worked all game to build up. With this logic, Blood on the Snow can return Skullbriar to the battlefield, saving us two mana (plus commander tax), allowing Skullbriar to attack freely. Necromantic Selection is played in 10% of decks, and Blood on the Snow is one mana less.

Rant over! Let's go to a decklist.

What do you think about these challenges? Are there any other cards you would challenge? Let me know in the comments below! As always, you can find me on twitter @jevinmtg. If you'd like to chat with other folks who like challenging the stats and underrated cards, join us on the Challenge the Stats discord!