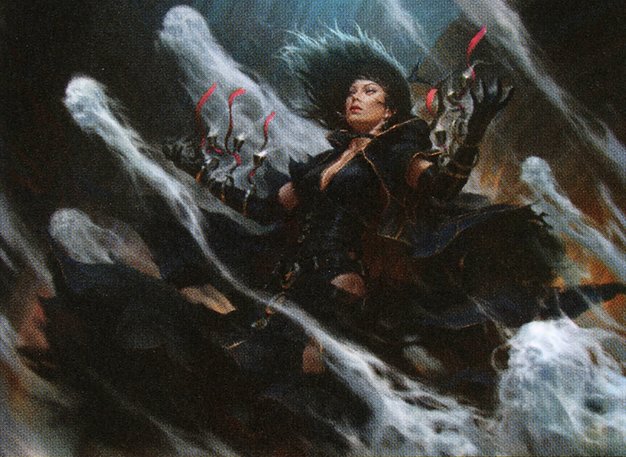 Welcome to Challenge the Stats! This series is based on the awesome EDHRECast segment where we pick out cards that we think are overplayed, underplayed, or sleepers to challenge EDHREC’s data. But remember, these are merely comments on the data, and card choices made by you, the deckbrewer, for any reason such as flavor, budget, art, or fun are always most important and are what keep our format unique and awesome.

I’m Mike Carrozza, aka Mark Carbonza of Commander’s Herald, author of Am I The Bolas?, the column where you - yes, you! - write in and ask me to weigh in on your Magic-related situations and determine if you're the villain or if someone else is! I’m taking over good ol’ sweetiepie Jevin Lortie’s incredible column Challenge the Stats in an old-fashioned SWITCHEROO! 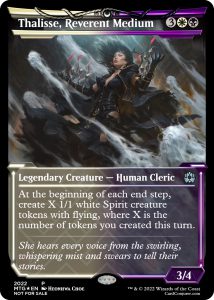 Shout out to Kyle Burton on Twitter for this gorgeous alt.
Kyle does excellent work!

This week, we’re challenging Thalisse, Reverent Medium, one of my favorite commanders in the last few years. Sure, it seems win-more to make tokens when you’ve already made tokens, but whatever! Have fun!

We’re challenging the data from all 1,117 Thalisse decks at the time of writing, and you can see how often those cards are played in parentheses (%). We might not see future Thalisse all-star Undercity Scrounger in the data just yet, but perhaps we will eventually. Here we go!

LET'S (and I can't believe I get to say this) CHALLENGE SOME STATS!

Let’s get an obvious one out of the way. We’re in Orzhov, baby! Things have come a long, long way. Despark, Generous Gift, and Anguished Unmaking show up on Thalisse, Reverent Medium’s page for good reason.

Mortify feels difficult to justify. The aforementioned cards hit a higher diversity of targets, sometimes even exiling. Heck, even the drawback on Generous Gift can be unintended value if we need to target one of our lands late game at an end step before untapping to swing with an extra 3/3 and a 1/1 flying Spirit token if our commander is out.

Mortify is multi-colored, does not exile, and does not target artifacts, planeswalkers, or lands. When considering our spot removal, this should be lower, in my opinion.

Believe me, I want Dramatic Finale to be really good here.

An anthem that only buffs tokens for four colored pips that nets us a 3/2 flyer if a nontoken creature we control dies, but only triggers once per turn has a lot more speed bumps than utility for my taste.

Thalisse, Reverent Medium isn’t Rakdos. We’re not doing the graveyard-Cauldron Dance-type shenanigans or resurrecting creature cards a ton here. Thalisse makes tokens that either swing or get used as resources. The nontoken rider here particularly stinks for Thalisse decks. Sure, I can get on board with an anthem for tokens that also makes tokens, but man, if it triggered multiple times a turn per nontoken creature, or triggered once a turn no matter if the creature were a token or not, I would say 33% inclusion would make sense. Here, I see this as a flavor pick, a pet card, or somebody really needs Devotion for a Nykthos, Shrine to Nyx. I mean, Field of Souls is right there! Oh, man, I just remembered that we only get a single buffed 2/1 flyer after a board wipe if we controlled a nontoken creature, and even if we had a bunch of them. This one gets me riled up!

The Monk enters the battlefield, then makes two tokens. With our commander out, that means four tokens total! But then this thing just sits there like a big beat stick with vigilance.

I can see the reasoning, but I don’t think it’s strong. At one more mana, Grave Titan gets us two 2/2 Zombies when it ETBs and attacks, and that's great even without Thalisse in play, and super spicy when she is! In a deck where the token creation is most valuable, I can understand wanting a payoff that isn’t a swarm, but this Monk gets chump blocked for days, and heaven forbid an opponent has a deathtoucher on board to block it.

Here’s a shocker: all of my picks for 'Underplayed' are about protecting our commander and other key creatures. This card just happens to allow us to make a token when we cast our nontoken pals. This card comes down early, is innocuous enough, and sometimes a single activation can be enough to swing things in our favor. Even just the threat of activation could be enough! I see this card in 16% of decks and fully believe it should be higher up. It’s on-theme, it’s protection, and it generates tokens. What more could you want?

Malakir Rebirth deserves a slot in every black deck, full stop. No matter the deck, you’ve always got at least one creature worth protecting in the command zone. If there’s nothing worth protecting, then boom, land drop. Thalisse, Reverent Medium is important to keep around, but if not her, maybe that Grim Hireling deserves a save. Maybe we sacrifice our Grave Titan in response to removal after hitting it with Rebirth and - what do you know - two more tokens and then two more after that if we’ve got our general out. I think this card rules.

We’re going to have a lot of disposable tokens to sacrifice. We’re bound to have a few creatures worth saving from a board wipe that doesn’t have the “no regeneration” rider on it. I love love love this card.

Do you like Harsh Sustenance but want to kill all your opponents at once? Try Gruesome Fate. Sure, you don’t get the life gain, but that doesn’t matter when you resolve this with 30 creatures on board.

This was one of the black cards from Innistrad: Midnight Hunt that stood out to me. Have you ever been in a standoff against a pillow fort deck or a rivaling token swarm or a three-player game where, if someone makes a move against one player, they’ve handed the game to the one they ignored? Siege Zombie has you covered. If Ghostly Prison is annoying, just tap the tokens to sting opponents. They don’t even need haste! Drumbellower says hello!

Look, I’m hardly the first person to say "Leave my graveyard alone!" but it’s exactly because of that fact that I think this card rules. Graveyard hate that rewards you with tokens is huge. This card has never disappointed when I’ve gotten it on board!

The last one is a combo piece. For those of you who know me, you know that I like an engine. I like something that gets going after a ton of pieces are in place and things really start humming. That said, I don’t really like infinite combos, so I hesitated to include this card. The only reason I did is because this card is meant to be a really silly Curse, and Curses are usually for your opponents - but this one is different. If we Curse ourselves in a Thalisse, Reverent Medium deck, it turns all our nonlegendary 1/1s into 3/3s that also for some reason lose their creature type. This is great against a tribal deck going off, I reckon.

Enter Requiem Angel, one of my pet cards. This magnificent Angel creates a 1/1 Spirit token with flying whenever another non-Spirit creature we control - token or otherwise - dies. Paired with the Curse of Conformity any free sacrifice outlet gives us infinite enters- and leaves-the-battlefield triggers, not to mention whatever effect the sacrifice outlet has (do I hear a Phyrexian Altar?). Finish the combo off with a Corpse Knight or a Zulaport Cutthroat and we’ve won ourselves a game with a minimum of four cards. Pretty fair, right? And yes, this could all be said for Divine Visitation, which sees play in nearly half of Thalisse decks, but if you’re using it as a combo piece instead of a beater generator, it’s pretty cool to pull out a card that people don’t recognize! Besides, a little redundancy in EDH ain’t a bad thing.

Thanks for Having Me!

What do you think about these challenges? Are there any other cards you would challenge? Let me know in the comments below! As always, you can find Jevin on twitter @jevinmtg, but you can find me on socials @mikecarrozza. Also, check out my comedy album Cherubic if you’d like!

Bug Jevin on Twitter about what you’d like to see challenged next, and be sure to check out his article today on Commander's Herald!

Cherubic lil ding dong from Montreal, Quebec who writes the column Am I The Bolas? for sister site Commander’s Herald. Stand-up comedian who’s gotten to do cool stuff.