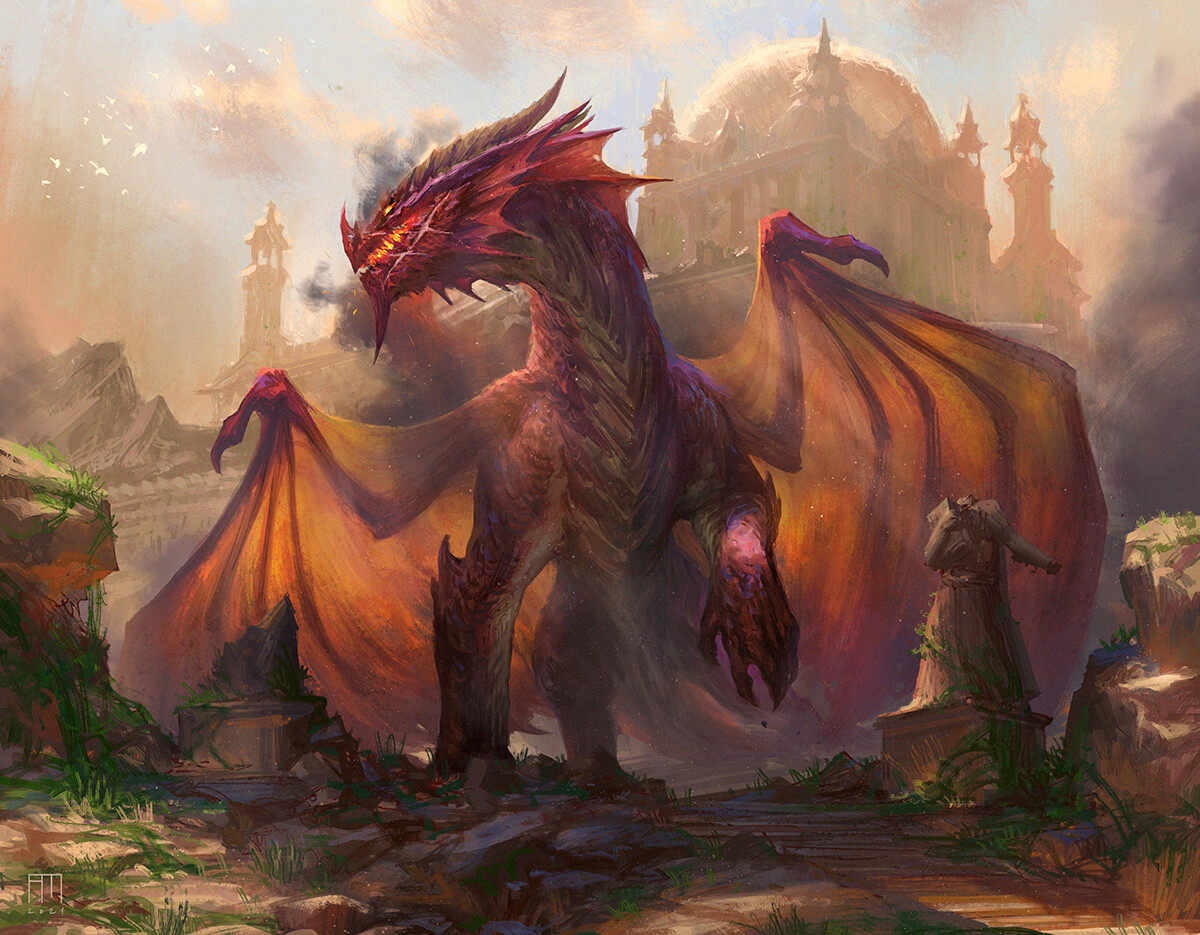 Is Goad the GOAT?

Oh boy, am I excited to talk about this new goad-y Dragon deck! I'm a big fan of goad (in moderation; we'll talk about that more later on), and I jumped at the chance to review this precon deck.

It was originally spoiled by Star City Games, and you can check out this YouTube video to hear their thoughts:

Let's get into the new cards!

Firkraag gives us an interesting deck balance decision. We could go all-in on Dragons and use them to fuel the second ability to draw cards, giving Dragon tribal an interesting new dynamic! We could also ignore the first line of text and pack our deck with goad effects and draw cards that way. Or, we could split those and dabble with both goad and Dragons, which is what the precon has done.

In my opinion, playing Firkraag as a primarily Dragon-themed deck will be the strongest option. The issue with goad is that when we're down to 1v1, it's much less effective, so goad decks are really good at taking second place. However, having big Dragons makes sure we can punch through to finish that last opponent.

The tricky part is getting low-costed Dragons to trigger Firkraag as soon as you play it. That's why we're seeing cards like Sprite Dragon, Chaos Dragon, and Territorial Hellkite in the precon deck. These might not be the strongest, but they help us get the goad train going early. Here's a Scryfall search of Izzet Dragons with a mana value of less than four.

There was quite a bit of chatter about whther Baeloth would be fun or miserable to play against. The folks I spoke with came to the consensus that goad is like hot sauce: a little bit is perfect, but too much and you're in for a rough time. If I may quote (and link to) Kristen Gregory's excellent article on this subject:

"The issue with Goad is that it’s an issue of agency. Agency in Commander is very important. Players invest time, money, and a little of their soul into their decks, and they want to feel like they had an impact on the game. While a lot of that boils down to having a well[-]matched pod, a good chunk of it also remains in being able to make meaningful decisions."

We Need to Talk About Goad

Initially, Baeloth will just goad small creatures, but they'll get big when paired with the Clan Crafter Background (intended to be paired with them in the precon), eventually goading most or all creatures. A permanent Disrupt Decorum is going to have our opponents scrambling for targeted removal... or player removal.

This honestly seems like one of the more broken Backgrounds we've seen. I would anticipate seeing Clan Crafter in the 99 of a lot of blue artifact decks. Breya, Etherium Shaper in particular seems likely to abuse this ability, with Urza, Lord High Artificer and Emry, Lurker of the Loch peering over her shoulder.

In the command zone, pairing Clan Crafter with Baeloth will be a great way to cash in on those Treasures. From another precon, Burakos, Party Leader would be a neat pairing for a Party or Rogue deck to generate Treasures and turn them into cards. We could do a nutty Simic token/Food/Treasure build with Jaheira, Friend of the Forest. Safana, Calimport Cutthroat also does a nice job fueling Clan Crafter with artifacts to sacrifice. You know what, most of the black "choose a Background" commanders could do some neat things with Clan Crafter, actually!

The Quasit seems great in a deck that wants to cast a lot of noncreature spells and not worry about getting attacked. This might perform better than a Propaganda in a spellslinger deck: Storm off, goad everything, and watch your opponents not be able to attack you! If we're playing Murmuring Mystic just to have a board presence and blockers, let's give the Quasit a try instead. I'm looking at Anhelo, the Painter, Veyran, Voice of Duality, Kalamax, the Stormsire - oh, and of course, dedicated goad decks like Karazikar, the Eye Tyrant.

Wait a second - the Quasit says noncreature, not just instants and sorceries, so what about artifact and enchantment decks? Do they want to use this thing too? Well, artifact and enchantment decks typically have an easier time maintaining a board state, so I'm more skeptical that Bothersome Quasit would make the cut there. Only when those archetypes are also combat-focused would Quasit warrant consideration, since goad can clear the way for our attackers. For example, Alibou, Ancient Witness or Go-Shintai of Life's Origin would be more likely to enjoy this pesky fella than many of their contemporaries.

Let's see how some similar cards perform. Mocking Doppelganger gives me Wall of Stolen Identity vibes, which is only in 7,200 decks, and most of those are thanks to Arcades, the Strategist. Imposter Mech is in 6,200 decks, but has the upside of turning a utility creature into a Vehicle that doesn't die as easily. I expect Mocking Doppelganger will make its way into less decks than these other options.

However, in a corner case, Mocking Doppelganger could be semi-decent, such as staring down an army of Scute Swarms, since it goads every creature with the same name. If the table is at risk of dying to 4-million Scutes, then this Doppelganger will buy you exactly one turn.

Death Kiss is an awesome name, and this card can certainly have an impact on the game as well. Doubling creatures power when they attack opponents is powerful. It's reminiscent of Avatar of Slaughter, but I think we're less at risk of dying ourselves when we play Death Kiss.

Forced combat commanders are going to be interested in Death Kiss, like Thantis, the Warweaver, Karazikar, the Eye Tyrant, and Tahngarth, First Mate.

Astral Dragon can do some really nutty things. Copy two of the best noncreature permanents our opponents control? Just imagine: that could be two Rhystic Studys, two Sol Rings, two Panharmonicons (then get six copies the next time it enters)!

This Dragon is going to be fantastic in blink decks, Dragon decks, and is just great general value in any blue deck. Check it out with Brago, King Eternal, Roon of the Hidden Realm, and literally any Dragon tribal deck with blue.

Spectacular Showdown is Disrupt Decorum cranked up to 11. The only other card to give everything double strike is Avatar of Slaughter (also in the deck), but goading everything on top of double strike means the game is going to end very soon. Once the dust has settled, there might only be one opponent left, all of their creatures will be tapped down, and we can finish them off with our double-striking creatures. We'll want to make sure we can punch through the last points of damage before playing this, or else we might die to double strikers after goad wears off!

Artificer Class is a house in artifact decks. It's another one of those cards that decreases our artifact synergy because it's not an artifact itself, but the upside in this case is likely worth it.

Level 1 is a slightly nerfed Etherium Sculptor, but being more resilient to board wipes means that discount will probably balance out over a long game (unless we're trying to Storm off with artifacts).

Level 2 draws us an artifact, which in my opinion helps make up for the fact that Artificer Class is not an artifact itself.

Finally, that expensive Level 3 is a powerful effect. In a dedicated artifact deck, we'll probably have something like a Darksteel Colossus or Triplicate Titan on board to copy (*cough* Brudiclad *cough*). This is a great include for commanders like Saheeli, the Gifted, Sharuum the Hegemon, or any deck with big artifacts!

Let's view this as an over-costed mana rock with lots of upside. It shouldn't be hard to get one Treasure per turn from Loot Dispute. This can be pretty powerful if you think about how Ragavan, Nimble Pilferer or Magda, Brazen Outlaw can quickly gain mana advantage from their early attacks.

However, we're not just getting a Treasure, we're also taking the initiative, which has some pretty saucy benefits to boot, and while we won't hit that Dragon trigger that often, it's a nice benefit and flavor win. After all, if you're being too loud while you're looting, the Dragon is going to wake up!

Loot Dispute will shine in combat-focused decks, and especially those with evasive creatures. Queen Marchesa, Isshin, Two Heavens as One, and Laelia, the Blade Reforged are going to be excited about this loot!

I'm so happy we got a Curse of Opulence reprint! I love dropping it turn one on the player that did the most degenerate thing in the previous game. These new cards are spicy too; I'm personally most excited about Astral Dragon, Artificer Class, and Loot Dispute.

However, here's the worst part of the set: we can't say "roll for initiative". Come on you guys, the initiative couldn't be a rolling mechanic? I'm formally launching an errata petition to change Initiative to: "Roll for Initiative – all players roll a D20. The player with the highest roll takes the initiative."

Let me know in the comments your favorite or least favorite cards in the deck!