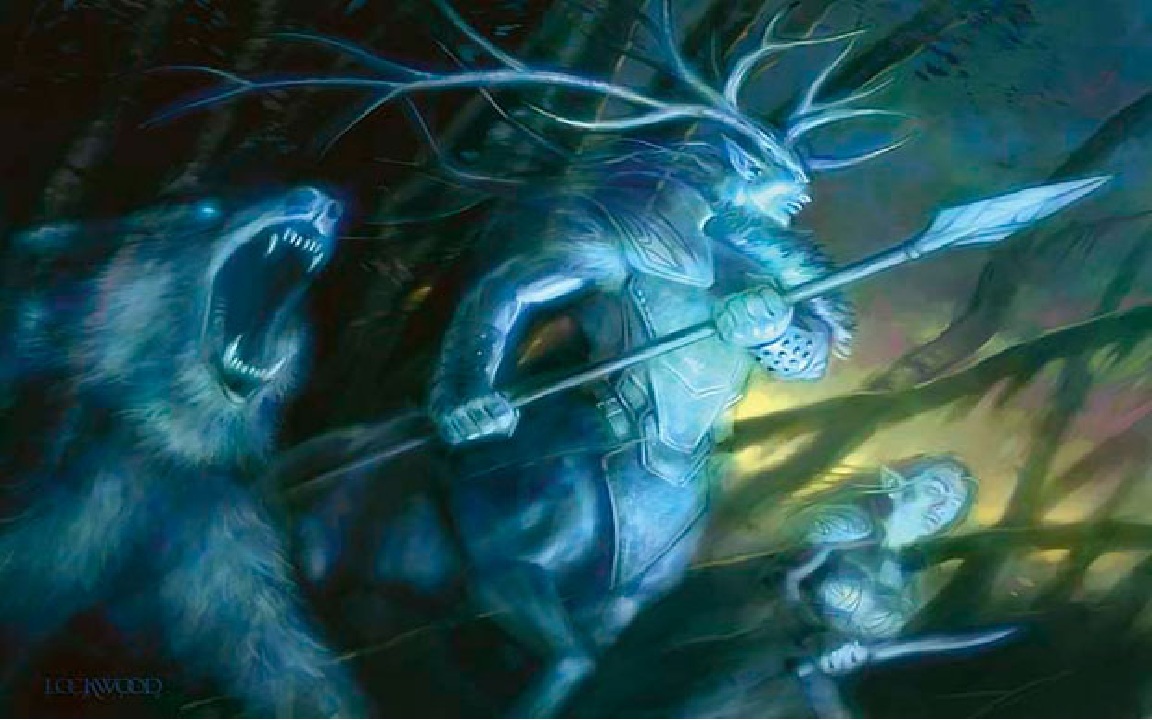 Hi everyone! My name is Neil DeMarco (yes, THAT Neil DeMarco). What's that? You haven't heard of me? Well, are you in for a treat! I’ve been playing Magic: The Gathering since the original Innistrad block and kept playing mostly on the local level. Now that we're fast friends, I'll let you in on a secret; I’m a competitive person, and Magic took over that mantle in my life once I joined the working world and had to hang up my baseball glove and cleats. Magic quickly evolved into a competitive outlet for me, but I became frustrated when basically everyone I played at any sort of tournament setting crushed the living pants off of me. It wasn’t until I continued to play and devoured every decklist I could find that it dawned on me: I wasn’t very good. I made common mistakes that most players make when they first pick up the game. Also, using my amazing powers of observation, I noticed that my opponent's cards were significantly better than me. Shocking, I know!

Eventually, I got it through my head that my decks were losing partly because they just weren’t that strong. Sometimes, to be competitive, you need to bulk up a little bit. EDH is no different; in fact, given it's non-rotating nature, it's essential! However, when I went to build my first deck I quickly realized that with over 15,000 (and growing) cards available to me, I banged my head against a wall and then took a friends advice and stopped hitting my head. When I came to, my friend pointed me to EDHREC where I found a comprehensive and data driven way to build my list and tune it to my needs (which means killing the table again and again!). One thing to keep in mind: being competitive doesn't come cheap. You often get what you pay for when you are driven to play a more competitive deck. Typically you are paying for the efficiency, flexibility and power these cards bring to the table.

Take this list for example, pulled directly from the Average Decklist on EDHREC for Karador, Ghost Chieftain.

Let me preface this segment by saying this deck is solid - it plays good cards, has good mana, and it can win via an infinite combo as well as grind out opponents with value creatures and powerful enchantments. I would not feel even the least bit worried about sleeving this 99 up and taking it to game night. This seems like a strong candidate for what we in the business call a “competitive” build. Does this mean it’s perfect? Not by any stretch. The important part of tuning a deck is figuring out the identity in relation to your metagame. Do your friends play fast combo decks, like Prossh, Skyraider of Kher or Animar, Soul of Elements? This may not be the deck to take with you as it isn't terrible fast and you can quickly find yourself a few turns behind their average draw and on the front line of their attacks. Let's face it, (almost) nobody likes to get caught with their pants down!

This is still a great deck, but it needs more focus on what I mentioned earlier: establishing an identity, and committing to it to the point of absurdity. This deck needs a truly focused plan; only then can we determine the best way to execute that strategy. For this exercise, I will should you how I would build a competitive, resilient Karador Combo deck. The primary objective is to reliably and expediently assemble one of our combos (Saffi Eriksdotter + Reveillark +Karmic Guide + Kokusho, the Evening Star or Sun Titan + Ashnod’s Altar + Nim Deathmantle + Blood Arist, for example) and kill our opponents as quickly as we can before they can respond.

A great first step is looking at the manabase. The first thing I notice is that the deck includes Urborg, Tomb of Yawgmoth, but does not include it's brother (or sister!) Cabal Coffers. That's like having peanut butter without chocolate's insane ability to generate Black mana! It also plays Ash Barrens and Evolving Wilds, which are fine cards, don’t get me wrong; however, an opening hand that includes these lands often leads to awkward openings, a death knell in competitive settings. If we revise the land base to look something like this, we can lower the chances of awkward draws and increase our chances to fluidly develop our game plan:

Every single land I added comes in to play untapped, which is more than a little important. Consistency and fluidity is critical, especially in a deck like this with a lot of double-colored mana symbol cards like Karmic Guide, Kokusho, Ashen Rider, and Eternal Witness, for example. Therefore, Golgari Rot Farm, Temple of Silence, and Temple of the False God have to go. While Temple of the False God comes into play untapped, it’s ability doesn’t activate until essentially your fifth turn, which makes it awkward in early turns.

Since we added the fetchlands, it allows us to trim our basics which increases our color flexibility and improves our consistency.

Moving on to the instants, Anguished Unmaking answers any problem non-land permanent at instant speed and in competitive circles you need flexible and powerful answers to the other folks around the table. Therefore, I would also add it's functional twin Utter End. The flexibility at instant speed is what wins here. Entomb is a huge combo enabler, and Path to Exile and Swords to Plowshares are solid, universal answers to many problems. Where I think we can do better is with Sylvan Reclamation. I would replace it with Krosan Grip. Krosan Grip is essentially an uncounterable answer to artifact or enchantment problems. It can shut down Relic of Progenitus, a problem hate card for Karador, before your opponent can activate it. Lastly, I would add Vampiric Tutor, Enlighted Tutor, and Eladamri's Call because these are some of the best instant-speed tutors available in our colors. Being a combo deck means looking for specific pieces, having a 1 and 2 mana instant speed way to find them is required. We also have some synergy with Life from the Loam for Vampiric Tutor, where we can put any card on top of our library and then dredge it away to our yard for future reanimation goodness.

To summarize our changes here,

Moving on to our sorceries, the only card I would change is Unburial Rites. A 5 mana sorcery should be winning us the game, and only reanimating one creature isn’t always going to do it. I would replace it with Farseek, an effective ramp spell that can fix our mana and accelerate us to our powerful late game threats.

Looking at the artifacts, the card that jumps out to me is Panharmonicon. We are already public enemy #1. Playing a turn 4 Panharmonicon only heightens that. I’m also not a huge fan of a 4 mana sorcery speed do-nothing on turn 4, which this essentially is. It’s fun and explosive when it works; however, it is slow, which typically means doom in competitive circles. It’s great when we have Sol Ring, but that doesn’t always happen. Since we are focusing on getting our creatures in to the graveyard and it’s critical to have a sacrifice outlet, I added Phyrexian Altar. Phyrexian Altar adds a needed sac outlet, and it generates much needed mana the turn we combo off.

Closing up our non-creature spells are the enchantments. For the most part, these are all great. However, I’m not the biggest fan of Deadbridge Chant. It takes a turn to get going, and sometimes tapping out for 6 mana later in the game isn’t where we want to be. It provides the window that some of the combo decks need to close the gap on us, and it's effect doesn't help advance our board state enough when it comes down to warrant the tempo risk it brings.

As I expected, the creature list is tight. You can only do so much meddling, but I think there are a few places that we can improve upon. The cards that jump out to me are Birds of Paradise, Elesh Norn, Grand Cenobite, Meren of the Clan Nel Toth, Woodfall Primus, Shriekmaw, Jarad, Golgari Lich Lord, and Yavimaya Elder. Again, these cards are fine, but we aren’t here for fine! We are here to kill our opponents, one sac outlet at a time. Birds is really only truly powerful on turn 1, and it’s arguably our worst top deck option beyond that point. Elesh Norn’s effect is great in specific metagames dominated by token or go-wide strategies, but against the typical competitive field her ability isn’t that devastating and will likely be answered quickly. Jarad’s ability is strong, and synergizes well with Kokusho. However, we’re probably already winning if we hit that point here it matters, and Jarad tends to be a bit slow. His recursion ability actually is more detrimental, since we are a bit mana hungry and every land is critical. Woodfall Primus is a powerful card, but we have enough of that ability and Angel of Despair is almost strictly better. Persist is good, but our ability to reanimate creatures so well in conjunction with the Angel’s ability to blow up lands gets the nod here. Yavimaya Elder falls under the “too slow” category, as there are just better things to be doing with our mana. Rounding out the creatures are Meren and Shriekmaw. Shriekmaw is conditional removal, and although there is synergy with the evoke mechanic, we have more than enough removal and the restrictive nature makes me want more out of the slot. Meren is great when she's your commander, and you can keep casting her repeatedly when it dies, but since we lack the ability to consistently do that, and because it is the only threat that cares about experience counters, I believe she doesn't make the cut.

Mindslicer is mean. Landing a turn 3 Mindslicer after a Turn 1 Viscera Seer, Turn 2 Farseek will not only make your opponents hate you (and discard their hand), it will probably win you the game. Since redundancy is important, I’ve added Carrion Feeder as an additional 1 casting cost sac outlet, and Angel of Despair as another way to lock our opponents out of the game with the Karmic Guide/Saffi/Reveillark loop by destroying all their permanents. Zulaport Cutthroat is an additional copy of [card]Blood Artist, which again lends itself to consistency.

So, with all those changes, here we are:

There you have it. If I were to sleeve up a competitive, sleek Karador Combo list, I would start here. Of course, all metagames are different, and at the end of the day, there are numerous ways to approach decks like Karador. I notably left out the Boonweaver/Pattern of Rebirth combo, as I wanted the deck to have a focused plan and key in on the two combos I described. Your opponent’s styles and lists will vary, and you should adjust to fit your playgroup best. This is just one example of how you can take a list, and switch things up to focus on winning. I'm happy we met and look forward to killing you at the table sometime soon!

Neil is no stranger to to competition. He enjoys the challenges of winning and approaching metagames. He can most often be found in the corner of his LGS, sacrificing his creatures for value and comboing off.