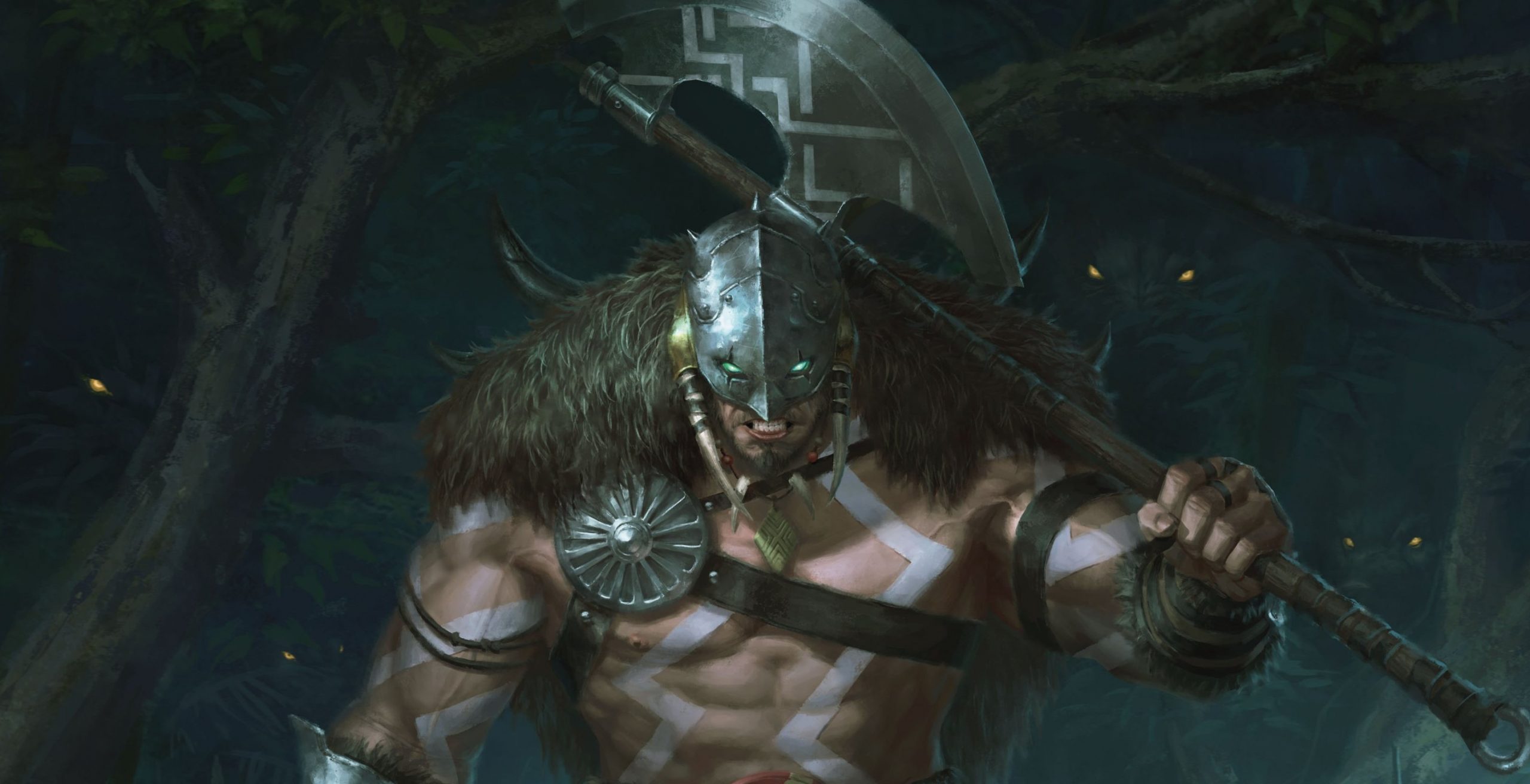 Cat's In The Cradle

Welcome back to our Core 2021 set review, currently featuring the catty, bestial associates of the Green persuasion. It's no Bountiful Harvest for green Commander-relevant cards in this set, but it's no Dust Bowl either. We'll look at a few niche role-players, some fun new tribal options, and a couple utility pieces I know I'm personally planning on adding to more than one deck. Without further ado, let's get green.

After seven iterations, Garruk has finally slipped his leash, giving us the first Garruk, Unleashed. When evaluating planeswalkers in Commander I weigh survivability and immediate impact more heavily than other formats. This Garruk can protect himself with his -2, but his +1 leaves a lot to be desired. Four mana for a worse Larger Than Life is never going to feel good.

His ultimate is a force to be reckoned with. The fact that the emblem triggers on your end step is critical, because an upkeep trigger would put far too large of a target on your back. This way, we can play Garruk the turn after dropping Doubling Season, ult him immediately, and go grab Avenger of Zendikar, Izoni, Thousand-Eyed, or any other brick wall in our deck.

Overall I don't think this Garruk will find as many homes as the venerable Garruk Wildspeaker, but his home-run ultimate will make him a fun finisher for creature-based decks.

It's getting harder and harder to refrain from building that Beast tribal list I've been toying with for the last year. Elder Gargaroth might just tip the scales and force my hand. The Elder has great stats for its cost and a flexible triggered ability that lets us create another beast or draw a card each time we attack or block.

That block clause puts the vigilance and reach keywords into overdrive. Our opponents have to decide if letting us draw a card is worth their swing. Meanwhile, we can attack a vulnerable opponent with impunity and draw each round if they don't deal with the Elder. I like the offensive and defensive balance with this card. It'll make for some fun interactions and choices for the table. At a minimum it should be providing one card per round while also providing some rattlesnake protection for us. For five mana, not a bad rate.

Beasts only have 146 decks on EDHREC, even after Ikoria gave us a veritable cornucopia of beastie boys. Elder Gargaroth says: let's get to work.

A recluse no more, Jolrael is trading in the ability to animate lands for a Cat army. Jolrael, Mwonvuli Recluse doesn't provide any card advantage herself, but rewards you for drawing cards on your turn (or your opponents' turns!) and maintaining a full grip. There are a plethora of ways to draw an extra card or two in mono-green, so this should not be asking too much.

For six mana, I wish her activated ability would also grant trample for our creatures, but maybe that's a bit too strong. Because she boosts base power and toughness, she works best for go-wide strategies with lots of smaller tokens. There's some combo potential with cards that enable massive draws like Fecundity or Praetor's Counsel. There aren't enough green Cats for Jolrael to be a Cat tribal option, but I'd suggest including Qasali Slingers in just about any deck she helms.

I like this addition to our go-wide commander options. Jolrael comes down early, rewards smart deckbuilding habits, and empowers us to finish the game.

What is it with cats and breaking things? Did someone in Wizards R&D lose a model airplane to a curious cat? My cat stole my keys the other day, but only so he could bat them around on the ground for a bit. He returned them when he was finished.

This is another slick option to the steadily-growing stable of Cat options in Magic. Cats are good at dealing with artifacts and enchantments, but this Cat maxes out at one per player per combat step, even if you hit the same player with multiple Cats. She encourages you to attack multiple opponents with your clowder. Did you know that a group of cats is called a clowder? I learned that today.

Wasitora, Nekoru Queen and Jedit Ojanen of Efrava are good homes for this card, as their evasive felines can get through to trigger its ability. The Sovereign's lord effect can become a problem for your opponents very quickly in this build.

Judging from the art, this quirky beast seems less like a harbinger and more like a transport for Garruk. He appears to be beast-surfing, which is an activity I've now officially added to my bucket list.

I suppose some creature-centric decks and Garruk-heavy decks will like this, but there is so much competition for this type of effect in EDH. With no built-in evasion, I don't think the Harbinger will be a frequent sighting at EDH tables once EDH tables are a thing again.

Another pump-and-fight spell, which don't typically fare well in our format. I expect this one won't flip the switch. There is some synergy with X spell lovers like Rosheen Meanderer and Wort, the Raidmother, but that's about it. Even Rhonas the Indomitable fight decks probably have more flexible options. Carry on, little boy blue.

Sporeweb Weaver is a solid spider addition even if it won't turn many heads. Creating Saproling tokens on any damage is a nice bonus that can add up quick, since this is a three drop you can float out early. The high toughness makes this viable in decks that self-damage by using cards like Fire Ants and Pyrohemia.

I enjoy seeing words like 'double' and 'triple' on Magic cards. It's a wink from Wizards of the Coast that the card was designed for Commander. Nyxbloom Ancient is the most prominent recent example. Someday soon we might see 'quadruple' or 'quintuple' on a Magic card. Hm.

In the case of Invigorating Surge, I think this will find a niche home. Commanders who really care about +1/+1 counters like Mowu, Loyal Companion, Hallar, the Firefletcher, and Skullbriar, the Walking Grave should be able to find a slot for this next to Solidarity of Heroes. For Voltron decks built around one single creature, it may even be better than Solidarity since it also grants a +1/+1 counter. The recent Hydra's Growth provides some competition for those slots.

Since Ikoria was just released, it would have been interesting to see this opened up to: "Add a +1/+1 counter, then double each type of counter on target creature" for precisely the sort of broken madness we expect out of our Commander games. Next time.

Garruk's Uprising is one of those sneaky cards we'll start to see in a lot of creature-based decks. Four power is not as challenging of a floor to hit as it used to be. Enabling trample for all of your big baddies for three mana while also drawing you more cards makes this a sort of budget The Great Henge, which is about to eclipse 10,000 decks on EDHREC in record time. Not since Blasphemous Act has a nine-CMC card ascended the ranks so quickly.

There are some standout homes for this like Gargos, Vicious Watcher, Goreclaw, Terror of Qal Sisma and Omnath, Locus of Rage. Any token-creating commanders whose spawn clocks in with least 4 power, like Titania, Protector of Argoth, Omnath, Locus of Rage, or Ghired, Conclave Exile, will have a lot of fun with this card.

I think we'll start to see this creep into some less-obvious decks over time. Dragons might find a slot for this, since they love drawing, and flying and trample go together like peanut butter and jelly. Stonebrow, Krosan Hero players should slot this right in. Commanders who boost their creatures upon entering can open up this card to some lower-curve decks, like Grumgully, the Generous or Kaheera, the Orphanguard.

Finally, since it triggers whenever your creature enters the battlefield, I think graveyard decks and Bant blink decks can find fun ways to abuse this by flickering or recurring their larger creatures for extra value. As if Muldrotha, the Gravetide needed more help.

This is a versatile option for card advantage and provides redundancy for Elemental Bond in the broad group of creature decks that need it.

When you combine Llanowar Elves and Elvish Visionary, you get Llanowar Visionary. I feel like Elves are already strong in Commander and probably don't need a three-drop mana source, but there is probably some way to break its ETB ability in the wonderful world of Elfball. Let me know in the comments below how you plan on doing that. Otherwise I'll just stick with Llanowar Tribe.

I saved the best for last. Just like the extra mushrooms on my pizza, Fungal Rebirth has great flavor and is highly nutritious. Er... effective? Analogy is breaking down....

We've seen a few of these effects at instant speed for green the last couple years. Regenesis is powerful, but five mana is a lot to hold up to spend on recursion. Once and Future is a little cheaper, and it's in twice as many decks on EDHREC as Regenesis. I think more players are accustomed to paying three for this effect because of Eternal Witness, so I think that Fungal Rebirth will be more popular than those other two options. The tokens are a nice bonus and there are plenty of ways in Golgari for us to make use of a few extra Saprolings.

I don't think it's a staple, but this is a utility piece that will find a home in a wide range of green decks, particularly Slimefoot, the Stowaway. It should definitely end up in more decks than Golgari Findbroker (currently about 3,700 decks on EDHREC).

Bonus recursion challenge: add Reap to a meta-appropriate deck, and surprise someone who's playing K'rrik, Son of Yawgmoth, Marrow-Gnawer or Yawgmoth, Thran Physician by recurring a full grip of cards for two mana at instant speed.

The Man in the Moon

Thanks for joining me on this green journey through Core 2021! Which cards piqued your interest? Did I miss any fun cards from this set? Do you agree with my analysis? Let me know in the comments below!