Do Your Worst - Mono-White Spellslinger 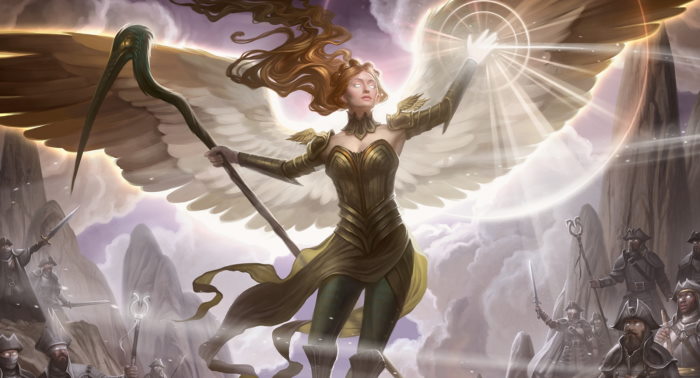 Sorry, You're Not My Archetype

Greetings all, and welcome to the first installment of Do Your Worst, where we take a popular archetype and find the most unusual home for it! I'm your host, Philomène, and in this column, we'll be looking at decks that shouldn't exist – or should they?

My first encounter with Magic must have been around Weatherlight in 1997. My brother Mat and I didn't know how to play, so the winner was the one with the most badass creature, usually Dakkon Blackblade (although we didn't know his name or what he did at the time because the card was in Japanese). Since then I've become a film composer, and while I've played a lot of TCGs, recently my brother brought me back into Magic, making me wonder why I ever left in the first place. Thanks, bro.

But enough about me! The reason we're here today is because of an old Reddit thread about breaking the color pie. In that thread were uttered the words 'white spellslinger'. That day I swore I would find a way to bring the spellslinging to mono-white.

So, where do we start? Well, looking at other spellslinger builds for inspiration, we want to be casting a lot of instant and sorceries and accruing value every time we do so. Murmuring Mystic is a good example of this. Next, we want some cantrips (à la Opt) and card draw to cycle through our deck while triggering our value engines. Finally, we need a way to transform all the value we generate into a win. Easy, right?

Now we just have to find all these pieces in white.

The commander usually holds an important place in spellslinger decks, providing a payoff (like Talrand, Sky Summoner) or card advantage (like Kess, Dissident Mage). In white, the only commander with “instant” or “sorcery” in its text is Mavinda, Students' Advocate, so naturally, that's where we'll begin.

By doing a thorough search, we find that the majority of spell payoffs or spell triggers in white belong broadly to two categories:

Already, two paths open before us. Upon further inspection, we realize that a lot of “target creature” spells are flicker (or blink) effects. This therefore gives us three clear archetypes : the Heroic spellslinger, the Flicker spellslinger, and the Lifegain spellslinger.

Let's try this first. Basically, the deck wants to go wide. Key cards in this archetype include Shrine of Loyal Legions, Vanguard of Brimaz, Monastery Mentor and Phalanx Leader. A good suite of combat tricks that draw us cards (let's call them... cantricks?) and reaction spells with protection or indestructible make for a sticky board. Mavinda provides good card advantage and operates a lot like Feather, the Redeemed. In the end, however, it looks a lot like a regular token deck, only with extra steps. We could aim for a Voltron Mavinda, but why not just go with Feather at that point?

So instead, let's turn to the flicker strategy and see what we can come up with.

Mavinda allows another kind of spell to flourish: flicker effects, like Ephemerate. White has access to a lot of those. Naturally, we gravitate towards good enters-the-battlefield effects, like Sun Titan, Stonehorn Dignitary, Subjugator Angel, Supply Runners, and Angel of Finality.

Then again, it doesn't feel quite right. We need a minimal amount of creatures to be able to flicker them, lowering our instant and sorcery count. Moreover, we ask ourselves the same question Brago, King Eternal asks himself: “Value is good, but how do we win?” It just doesn't have the feel of a true spellslinger.

We just have to hope that the lifegain route is the one for us. (Spoiler: it is!)

Since we're leaving behind the “target creature” spell category, we'll say goodbye to Mavinda as our commander for now until we have a better idea of what the deck needs.

White has a lot to offer when we enter the realm of lifegain: token creation, counter distribution, card draw, wincons. Also, the Extort mechanic ties in pretty well with our plan now. This looks good, so let's get brewing!

Additional ways to gain life. Ashes of the Abhorrent hinders some graveyard decks and, in the right situation, gains us tons of life. Suture Priest triggers on our creatures, but it can also be devastating against an opponent's go-wide strategy. Sunscorch Regent is mainly there for gaining us life on every player's turn, but it's also a big evasive body.

Life payoffs. The next step now is to use the life we gain to our advantage. Griffin Aerie, Resplendent Angel, Angelic Accord, Valkyrie Harbinger and probably my favorite card of the deck, Crested Sunmare (death by Horses? Yay!) are all pretty efficient ways to get creatures out of our spells, and, except for Griffin Aerie, they trigger on each opponent's end steps as well.

Card advantage. It's a good idea to leave some mana open for Dawn of Hope and Well of Lost Dreams. Sigarda's Splendor is a nightmare to keep track of, but it's worth the effort... mostly. Both modes of Cosmos Elixir are good for us. Alhammarret's Archive, though, is the real deal. It turns our cantrips into Divinations and doubles our lifegain. Yes, please.

Now for the main course: Bösium Strip. Can I interest you in a 6-mana Past in Flames (repeatable for 3) that does absolutely nothing if you have anything other than an instant or sorcery card on the top of your graveyard? I know I want it. What are we going to run instead, Secret Rendezvous?

Removal. Let's start with the usual Path to Exile, Swords to Plowshares, and Generous Gift. Oust and Unexpectedly Absent are cheap, and Council's Judgment gets people talking. Aura Blast works the majority of the time, and it cantrips. Lastly, if we really want to spice up our deck, we can play Debt of Loyalty. Look, it might be a dead card a lot of the time, but are we realistically not gonna play white's Control Magic? I thought so.

Mass removal. Fumigate is the definition of synergy. Vanquish the Horde is usually cheap to cast, and since we will have a bunch of tokens, By Invitation Only can be kind of one-sided.

Protection/reactions. We have some key pieces to protect, namely Reservoir and Archive, so Blacksmith's Skill and Rebuff the Wicked fit the bill nicely. Good old Lightning Greaves, along with Shelter, Flawless Maneuver, and Valorous Stance, will protect our creatures, the latter doubling as a removal spell. Nifty. Nobody ever expects Lapse of Certainty, either, and Riot Control can turn a deathblow into a decent situation for us.

Wincons. How do we win? Well, Aetherflux Reservoir is a huge threat. Finale of Glory is a nice mana sink, and 4/4 flyers with vigilance will likely close out the game at some point. Approach of the Second Sun puts our opponents on a clock, and with our (surprisingly okay) card draw, we can get to our second cast pretty fast, provided that we don't shuffle our deck. Which I have never, absolutely never done. Like, ever.

Now that we've got our deck, which commander should helm it? With only eight spells that target our own creatures, Mavinda, sadly, won't be making it. We have then to turn to our lifegain strategy.

After much deliberation, we will go with Regna, the Redeemer (without her Partner, Krav, the Unredeemed, of course). Between having a “gain life” effect on a stick or a “life payoff” effect on a stick, we choose the latter. Sure, she costs a lot, but we have stuff to do in the early game anyway. Plus, her payoff is quite good: two 1/1s every end step is not bad, and she's a 4/4 flyer herself.

Now for the complete decklist!

I think white has a lot of the tools needed for a spellslinger deck: cantrips, removal, board wipes, etc. We had to be creative to find some spell payoffs and card draw, and, besides Mavinda, there are no commanders strictly made for this archetype. But we got there, mostly.

What do you think? How would you build a white spellslinger deck? Is there some interaction or synergy that I've missed? Let me know in the comments! I'm Philomène, and this was Do Your Worst. See you next time!

I want to thank my brother Mathieu Gatien for his valuable input on the deck and reddit user Much-Story995 for the Extort idea.