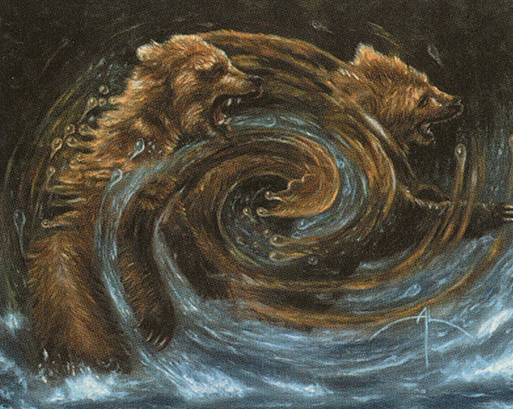 Welcome back to Dual Shot, the strange place where we brew two decks at the same time... in one deck.

This time, the old familiar space has changed - is still changing. It was never not in flux, like anything. Before things get too Heraclitean, let's try to capture an image, a snapshot of an idea, to try and preserve it - if only for a moment - against the fate of change.

The weft, warp, and ripple sends us down the stream to this: a lifegain deck overtop a Voltron deck. But nothing's ever that simple, even on the shore. There's safety there, sure, and more certainty than in the riffling deep, the rapids, the waves. Instead, our supertheme here presents as loss of life. There are no infinite lifegain combos, no Felidar Sovereign, no Aetherflux Resevoir. Instead, we're swimming with Deathgreeter and a sparse few instances of lifelink - to scarcely mitigate our blood magic.

With Greven, Predator Captain at the helm, as he was meant to be, we'll be recklessly fueling our life-engines, creating towering, combative win conditions, betting everything on the connection.

If we can avoid the ever-looming bad luck of the rip current, we should see our life total circle around widely and wildly. Get him wielding Loxodon Warhammer, and turn an opponent's loss to commander damage into a dramatic shift in our own life total.

And hey, enchant yourself with Curse of Fool's Wisdom, why not.

Ebb: Life is paid, the cost for continuation. The risk of diminishing to nothing, but nothing's ever nothing.

Flow: That's the truest swing of all, that change of life from something to nothing, to less than nothing, to a new game, back to full.

This is a brew about movement. Firewing Phoenix flies from the graveyard to your hand, to the battlefield, and dead again in the whorl. Revenge of Ravens turns combat into a dance of life totals. Relentless Assault beats at the beach with endless-seeming waves.

You get the idea.

If the conversation ends in compromise, what cards are required to make that clear?

In truest Dual Shot fashion, there's a tertiary component of sacrifice at play here. Shadows of the Past, Sorcerer's Broom, and Phyrexian Reclamation all play nicely with cheap, recursive drowners.

Ebb: You could lean into this more heavily; it's risky going in with Greven alone, and there's not overmuch protection for the captain.

Flow: Or you could commit to it. Butcher's Glee, Rush of Vitality, Swiftfoot Boots, and Whispersilk Cloak (mind your ordering on that one - hammer, then cloak). These all work well enough to, well... well.

Ebb: These water puns are weakening.

Flow: So too your resolve.

Crypt Ghast would be a good swap-in if we're not feeling enough acceleration - Blood Celebrant only provides fixing (that is, in this context - it's also an unlimited source of loss of life). Vilis, Broker of Blood is terribly on-theme, and worth experimenting with, but generally too top-heavy here - Angrath's Marauders is tricky enough to cast. And sure, you're already spending five mana to get Greven out, but you'll more likely want to spend the turns after that curving into the mana you need to deal lethal commander damage. As well, consider things like Shadowspear for added redundancy, and some extra utility. Perhaps the most obvious alternate inclusion is K'rrik, Son of Yawgmoth, turning all of your black pips into Phyrexian mana, and having three of them in his own casting cost.

And while this is a lifegain deck only in a painfully ironic sense, the presentation of the concept was pretty hipster too. That makes it all right.

Ebb: Let the current of pretentiousness pull you down. There is comfort in the deep.

Flow: Come on, this deck's not that weird. I can get way more obtuse with the brew. Temporal Extortion? Cauldron Dance?

Ebb: I meant in the writing.

Before we let ourselves wade too far into the deep end, that's all for this experiment. We all have stories about securing victory from the nearest jaws of defeat. What about intentionally wandering into near-death to grab a win out of nowhere? What decks have you used to bloodbend your way to the top? Send us your One with Nothing win cons, please.