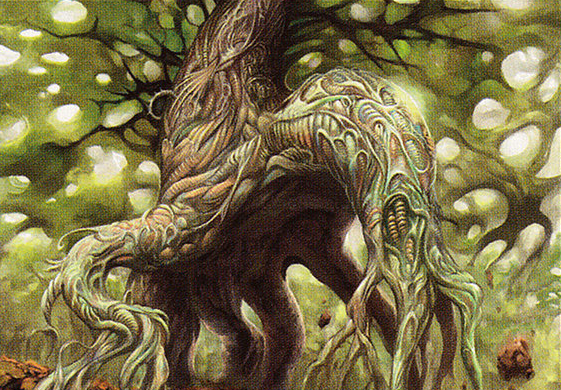 "Rude awakening." That's a strange idiom, isn't it? There's the intended meaning of a harsher realization casting a cold, hard shadow on one's naive preconceptions. This plays on the lyrical image of someone being shaken awake, as from a pleasant slumber or a daydreaming doze. The feeling of a sudden turbulence, a dramatic change in one's state of mind (or board), is likely a familiar one for all of us.

And though it can certainly be unpleasant, why is politeness factored into the discussion at all? Is it somehow a breach of decorum to alert someone, even roughly, to the truth of wakefulness?

Wake up, sheeple! Or, wake up sheeple? Oh, uh, Gyrus can actually do that. Commas can be fun.

And the sad truth is that although there is a distant and tertiary theme of Dragon tribal in this brew, this Reanimate deck inside a Sacrifice deck has no method by which to grant Human as an additional creature type to Nyx-fleece Ram, although I'm sure that's possible in another deck.

Without too much more rambling in the hillsides of madness, I welcome you to the latest edition of Dual Shot, where we brew two decks at the same time... in one deck.

Hidden in the Depths

We're back to a split more closely approximating 80/20, as was established in Dual Shot's pilot studies. Actually, sometimes it feels like you have to really dig for the reanimation subtheme to rear its head, even with Gyrus, Waker of Corpses at the helm. But these two themes enjoy a sort of natural synergy: sacrificing creatures puts them into the graveyard, and in this case, apparently, they're only mostly dead, as your Hydra alarm clock is clamorous enough to get them up and out of their deathbed.

And while we're going to be running cards like Victimize and Dread Return, the payoffs are primarily in the shape of sacrifice triggers - in fact, in our 99 lurks a king cursed with gluttony: Korvold, Fae-Cursed King. Korvold almost functions as a hidden commander, fueled by the rest of the deck and either drawing you into an out or turning sideways, himself. Reanimating one of our draconic threats - cards like Karrthus, Tyrant of Jund or Atarka, World Render, can easily knock a single player out of the game, but you'll need to rely on the pressure of recursion and card draw in order to eke out a victory - especially with a card as common as Bojuka Bog essentially hitting you like it's a Time Walk if you're in a lane for reanimation.

One other thing to be wary of is the fact that Gyrus puts a creature token onto the battlefield tapped and attacking - which means that although the creature is attacking, it was never declared as an attacker while moving into to phase (when you declared Gyrus as an attacker) - this means that any tokens you create with on-attack triggers do not trigger. No surprise bonus mana from Savage Ventmaw, sadly. But let's take a look at the pile of cards and see what does work.

So you might have noticed that this is a shakily modified Korvold Brawl deck. As well, this particular Dual Shot is still in the early stages of development. You'll want good utility from your sacrificial lambs, er, Dragons, or whatever weird thing you'll be delivering to the gods. Spore Frog and Ashnod's Altar are must-includes, and although we want our creatures dying for the cause, a good pair of Lightning Greaves might be nice for Gyrus, though I'm not exactly sure it's the boot-wearing type. Sandals, maybe. In any case, Gyrus dying to removal isn't the worst thing in the world, as his commander tax can be worked into his casting cost rather elegantly. For example, the first time you cast him, say you make X=3, so you cast him for 6 mana in total. He dies, and then you recast him with X equaling 1, you pay the tax of 2, and you've... spent 6 mana in total. Your clangorous Hydra still enters with six +1/+1 counters. That's the sort of recursion that any Timmy or Tammy could love.

Then some obvious cards to connect our adjacent themes at play: Buried Alive, Victimize, Dread Return - and a few other Reanimate-esque cards (like Reanimate, perhaps) to get the infrastructure of our thematic bridge up to code.

While you're cleaning up your mana base - replacing the taplands, gainlands, and lockets with any sort of fetch, even things like Evolving Wilds or Terramorphic Expanse for fixing and sacrifice triggers - you may also tidy up some of the rest of the chaff. While all-stars like Blood Artist, Mazirek, Kraul Death Priest, and The Gitrog Monsters are all very interested in what we're doing, simpler upgrades (read: removal suite) take priority. How did a regular old Murder find its way in here? Gods, it's like I'm asleep when I add the removal to these decks.

You'll also have fun slotting in things like Anger, Ramunap Excavator, Fleshbag Marauder, Feldon of the Third Path, and Pitiless Plunderer. This reanimation catalogue, though not particularly fleshed out (accidental pun with our Zombie Warrior friend), ends up looking more Mardu than Jund - insofar as it's combat-centric. Gyrus, Waker of Corpses into Bladewing the Risen into Atarka, World Render is wonderfully stupid and probably doesn't even work the way I want it to (remember, when creatures are made to enter the battlefield tapped and attacking, they were never declared as attackers, so "when ~ attacks" triggers don't hit the stack). At any rate, if you need another Dragon, Prossh, Skyraider of Kher has got your back. I can only assume that means he has your back, and most of the rest of you, in his mouth, but, hey, free sacrifice outlet.

As it stands, this list is really more of a 90/10 split, but that's owing to one simple truth: that this was just a Korvold deck at first. The Brawl precon got retooled into an EDH deck that looked a little bit too much like many other recs for the Fae-Cursed King. That there was a good deal of overlap in the sacrifice and reanimation themes (and any graveyard strategy, really) led to this becoming an early Dual Shot candidate. And even in its fledgling form, this list hearkens back to an earlier Dual Shot experiment, one with Shu Yun, the Silent Tempest front and center. By this I mean that a much closer split seems very feasible. As long as you can reliably fill your graveyard (self-mill, sacrifice outlets, big threats eating spot removal), you have fuel for reanimation. If you can secure payoffs for both filling and emptying your yard, then perhaps by some metrics, you've brewed two decks at the same time... in one deck... aaaand Catchphrase!

That's all for today. If I'm to field a question to you folks, then it has to be about graveyard synergy. What lists have you played with that did more than one thing with the old lichyard? Were you bringing back lands and maybe hoping for a heavy ping with Lotleth Giant? Let us know in the comments. Till next we meet.