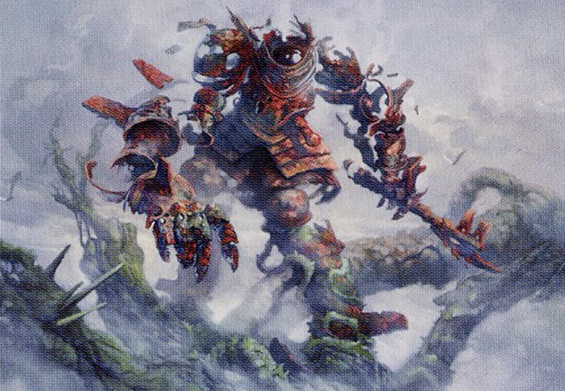 We find ourselves in a clear, clean space. The air here is pure, the landscape reposed in disciplined geometries. One is inclined to think of stoicism, sculpture. Simplicity. Without nuance, there is duality. This is the latest iteration of the experiment, now perhaps distilled into its crystalline form.

Welcome to Dual Shot, where we brew two decks at the same time… in one deck. This time, the artifact theme acts as an oversoul to an enchantment theme, led by none other than Alela, Artful Provocateur. Of the themes that EDHREC identifies, the artifact theme is the most populous, with 12,742 decks as of this writing. Additionally, there are 5,054 Aura decks and 4,925 enchantment decks. If we were to merge those two themes for the sake of an (arbitrary) metric, which we probably shouldn’t, we get 9,979 decks, making that hypothetical supertheme the second-most popular deck type.

Alela was a difficult general to ignore. At first glance, especially with more of a lay perspective, it looks like she’s asking to be built two ways. Then it seems clear: those Faerie tokens are the goal, and the artifacts and enchantments that generate them are likely to be conducive to that token strategy, anyway. If the inclusion percentages for decklists are any indicator, then the usual tactics employed are to that end.

But what if we were to shy away from the plan of going wide with evasive threats and instead focused on inverting that last block of text. Rather than artifacts and enchantments that would be good for Faeries (or for Esper, for that matter) by generating incidental value by making more 1/1 flyers, all the better to take advantage of Etchings of the Chosen (~51% inclusion rate for Alela lists), Favorable Winds (48% inclusion rate), and Bitterblossom (41%), what if the tokens. themselves. were the gratuity?

It’s generally much easier to produce artifacts en masse than it is to create enchantments, and there are a number of enchantments that repeatedly produce token artifacts. The decision to prioritize the artifact theme and incorporate an enchantment subtheme was made thusly.

Anyone Seen the Bridge?

In the inaugural Dual Shot, there was an attempt to capitalize on certain “bridge” cards, as it were; in that case, the cycle of Oaths – enchantments that cared about planeswalkers – leading to a utilization of those cards to support both themes. Here, while it’s true that Smothering Tithe and cards like it are available and ideal, that most elegant reduction of the so-called bridge is presented to us in the form of only three cards: Spear of Heliod, Bident of Thassa, and Whip of Erebos. There are two more legendary enchantment artifacts outside of Esper, and this cycle represents the totality of such a fusion. In the context of this brew, however, a mere three celestial weapons can still provide a good bit of utility.

Either way, these two card types work surprisingly well together, and staples from both themes can interplay beautifully with but a gentle push.

Arbiter of the Ideal was an early cut: although it was our only way to produce a fourth enchantment artifact, it was proved to be fairly unreliable. Argivian Find was another cut: although I didn't feel too good about this one, you still have Hanna, Ship's Navigator and Cavalier of Dawn to pull something back in a pinch.

Cloud Key and Enlightened Tutor would make for powerful inclusions. Even more obviously, Parallel Lives and Doubling Season make your various routes faster and more oppressive, although together, these cards cost as much as a Nintendo GameBoy Color. Revel in Riches becomes viable sooner, and your field is more rapidly filled with 1/1 flyers. And speaking of alternate win conditions, enchanting Marionette Master with All That Glitters or Helm of the Gods and then cracking every Treasure and Clue you control is satisfyingly esoteric.

It’s looking more and more like I add Sphere of Safety to every list that I possibly can, but at least here it seems to play well with our enchantments subtheme. The Pillow Fort effect it provides is unlikely to be particularly relevant since it’s really the only instance of such an effect in this build, and we’re going to be rallying plenty of Fae folk to our chump-blocking cause each turn. So, sadly, Sphere of Safety makes for one of the early cuts should you modify the list.

Smothering Tithe is an enchantment that makes artifacts. So are Thopter Spy Network, Revel in Riches, and even Anointed Procession after a fashion. This generates absurd value to your “Voltron” components – that is, your All that Glitters, Helm of the Gods, and to a very real extent, Shambling Suit and Darksteel Juggernaut. But it’s not unrealistic to grow a 1/1 lifelinking Faerie or a 1/1 Thopter (possibly an indestructible Thopter if you were to slot Darksteel Forge into the deck somewhere) to a meaningful height and then swing for a significant change in life totals.

In a modified brew, there could be a very accessible lane in the shape of symmetrically disrupting nonartifact mana-production. We all know mass land destruction can be seen as unsavory, but if you're feeling a more chaotic alignment one afternoon, well, running that as a tertiary theme is viable. Just do so with caution (both in terms of propagating your win condition and in terms of maintaining your relationships).

Your card draw comes from Bident of Thassa, Mentor of the Meek, and even Machinate and Arcanist’s Owl. Less reliably, you have Thopter Spy Network and Clue tokens. As well, the legendary Artificers on-duty, and the planeswalker suite can provide even further card advantage.

As is Dual Shot tradition, this deck needs a more robust removal package, but we do at least have Swords to Plowshares, Attrition, and Darksteel Mutation (which provides some flexibility insofar as it can, with a little work, turn one of our creatures into an indestructible threat). And speaking of a bit of work, nothing is quite so dramatic as sacrificing a Faerie token to morph Gift of Doom onto Alela, followed by Convoking a few other Faeries and perhaps a few white creatures to cast Hour of Reckoning, and then finishing with Open the Vaults to bring any artifact creatures and Auras back to the battlefield. All this for the low, low cost of 7WW and one ticket to Magical Christmasland.

That's all for this installment. When have you taken two such massively supported themes and mashed them together? Creatures and 'walkers? Spellslinging and stax? Goblins and Merfolk? Let us know in the comments below. Till we meet again.