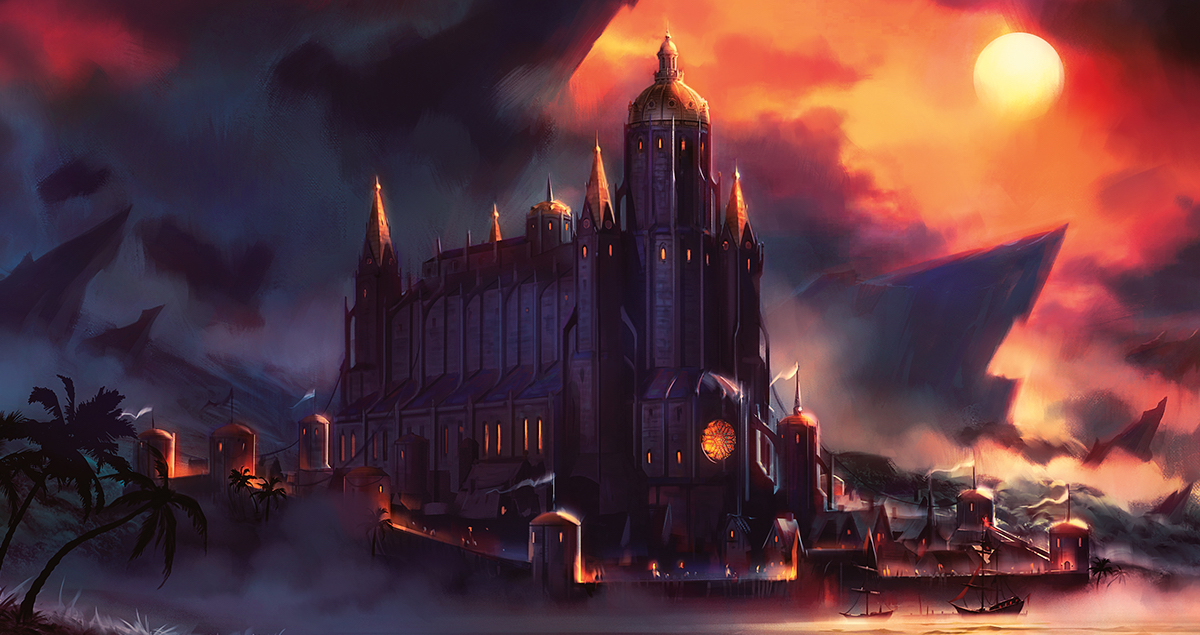 In the Aztec year of one Reed, the people of Tenochtitlan welcomed the second coming of their god, Quetzalcoatl. The man that came was named was Hernan Cortes. He would be their downfall.

Wizards announced Ixalan as the world of dinosaurs fighting pirates; however, there is much more than that in our new plane. There is a rivalry among vampires and merfolk as well that plays on historical analogies. The vampiric Legion of Dusk is analogous to Spanish conquistadors in lore and character design. They have a religious conquest of new lands for precious resource (blood), but they are also visually similar to Spanish conquistadors. The important question we can answer here is in what ways could we use Spanish conquistador’s tactics to manipulate, pillage, and conquer our enemies in an EDH game?

“Guns, Germs, and Steel” by Jared Diamond is a book that discusses a similar idea to what we attempt to pry out of history with this experiment. Diamond argues that certain segments of the globe have specific geographic advantages unavailable to others. These societies (historically those in Europe, the Middle East, and North Africa) have conquered, colonized, and outpaced others technologically. The reason they have the advantage is largely geographic, Diamond argues, but the actual advantages they had came down to guns, germs, and steel. Similarly, I think we can mostly convert this idea to a deck based around our new conquistador Vona, Butcher of Magan.

Reach for The Skies!

Guns are not a subject Wizards of the Coast often touches for Magic: the Gathering. Spot removal is our best equivalence to firearms in the card game. We get flavorful additions like Elaborate Firecannon, but this is nothing compared to the power of iconic targeted removal. Swords to Plowshares and similar cards take out creatures with a range and efficiency that combat can’t. Your advantage in any combat when holding removal and the opponent doesn’t is staggering. It’s the closest you can come in an EDH game to going in with a gun to a knife fight.

More perfectly, if we equate removal to guns then we picked the right commander for our case. Vona, Butcher of Magan comes to any combat locked and loaded like a Jason Statham movie. Seven life will add up much quicker than expected, but if you build the deck to sufficiently weaponize lifegain then it should be essentially free ammo. Black and White are the best colors at exactly two things, gaining life and kicking ass (I mean spot removal.) Access to nearly unlimited life ammo for Vona, and to the best card removal in the game is a huge benefit when running these colors. Vindicate, Anguished Unmaking, and Utter End can banish nearly any threat you can think of for very little, and we get to play them all. Powerful removal grants a lot of bargaining power, but also invoke fear. Revealing your intentions in a timely manner can gain you allies and enemies in one stroke.

Smallpox was weaponized terrifyingly by Europeans to ravage the Americas. City-dwelling Europeans lived in such close quarters to animals and other human waste that they gained resistance or immunities to many diseases that others could not. Natives of the Americas had no such resistances and faced devastation.

As crazy and messed up as that is, Pox effects are iconic in Magic. Small Pox and Death Cloud have symmetrically terrible effects, but if you sequence correctly or craft your deck to mitigate the effects, then you can come out ahead. The largest parts to be worried about are lands and creatures. These effects generally are not known as politically savvy moves, but they may be so impactful that the only thing opponents can do is try and recover. Where political maneuvering comes in is how you use it in combination with targeted removal. If you can break apart large board states with aggressive attacks and spot removal you can make any sacrifice effects of Smallpox or Barter in Blood especially devastating for one player.

If a plague is not a devastating enough disease then you can take their blood. Leeching effects as on Blood Artist are symmetrical, like Smallpox, but bring you closer to many other great ways to win. A new card to play with this is Axis of Mortality. If you leech enough life, Aetherflux Reservoir in combination with Axis of Mortality, gives away your newly minuscule life total away or better yet straight 86 everyone because of Exquisite Blood and you seal up a game quickly.

I could have gotten into the power of a good defense and how hexproof is way too good in way too many situations, but alas there is something more fun, and appropriate for our venture to the new land of Ixalan; stealing! We are vampires after all, and bringing new sorts into their cohorts is one of the things the tribe does best. We got a new addition in Commander 2017’s vampire tribal deck with New Blood. However, there are plenty more steal effects in black and white that don’t involve our bloodsucking friends that I didn’t realize. What could be more flavorful in our conquistador deck than Evangelize? Giving your opponents the choice here can be horrendous if you’re given a token, but when you so closely control their population with guns and germs what choices do they have left?

There are plenty of great Mind Control effects that I didn’t realize before building this deck like, Ritual of the Machine or Debt of Loyalty (working fantastically well with Vona). More importantly, you can go slower and dumber. The wake of bodies your firearms and plagues leave gives us plenty of morsels to play around with while using one of my favorite cards. I first found this as a younger lad exploring new cards only by opening them in boosters. Debtors’ Knell was my first love. This is the ultimate win more, do nothing card you can add to a deck, but it is so much fun to play with. Seven mana to paint a huge target on your back while not actually netting you anything for a whole turn cycle is a huge cost. But you’re not just traveling halfway across the world to conquer people and not bring them back from the dead, right? There are plenty of silly ways to play this card, but I want it because I’m still a child at heart.

Vona, Butcher of Magan doesn’t need to be vampire tribal. She has so much going on that I didn’t touch on. I could have made yet another article on how great Paradox Engine is. Don’t get me started on the magical Christmas land that Evangelize could bring into this. I think Vona, Butcher of Magan won’t ever be as popular as the other legendaries in this set, especially since there are much more satisfying ways to build vampires (Edgar Markov), or lifegain (Oloro, Ageless Ascetic). However, after much pondering, Vona is much more powerful and interesting than I first gave her credit for in the previews. She will likely be a dark horse in many card shops.

Thank you so much for reading! Tell me how you would build Vona, Butcher of Magan. Or just tell me what you will do with the new vampire cards for your Edgar Markov deck. Let me know what you want to hear about in upcoming EDH political science articles, which political cards you play with, or what your thoughts are about politics in the world around you. I will see you soon. Stay savvy and conquer new lands!