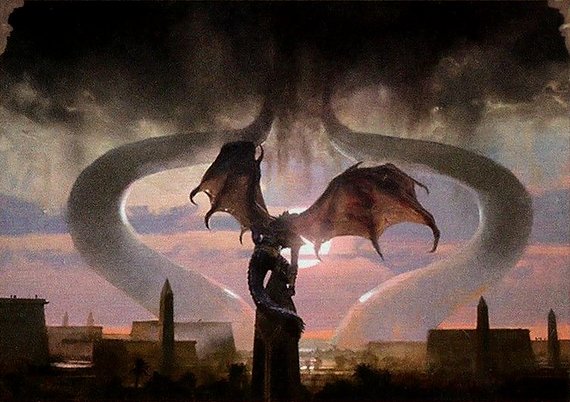 In this article we'll be building around the single most complex card in the game. After this card is cast, it's a whole new game. The card that I'm talking about is Doomsday

Search your library and graveyard for five cards and exile the rest. Put the chosen cards on top of your library in any order. You lose half your life, rounded up.

There are two main reason why this card is only played mostly at competitive tables. The first one is the cutthroat nature of the card; this isn't a "let's be friends" card, this is an "I'm gonna win right now" card. The second is how difficult it is to play it even with a predefined pile; there are so many variables that it often leads into a lot of dead time for the rest of the table.

Having a cheap way to get through all five cards is crucial for a good Doomsday pile. It doesn't matter if we spend a bunch of resources into making our deck a five-card pile if we have trouble accessing said pile.

Mana is also an inevitable barrier that we need to overcome. For us to both cast Doomsday and win on the same turn, it means that we'll need three black mana just as a start. This is both color-intensive and expensive mana-wise.

Doomsday's interaction with Hive Mind might be something worth exploring. Cards like Wound Reflection and even having Symmetrical Mill effects (to get powered by Hive Mind) are basically auto-win.

It's often common to see ourselves as part of the "good guys"; after all, we understand our actions and can relate with our motivations. That being said, what if we're actually the baddies? What if, to us, Doomsday is our happy ending? One might even say that we'll live... Happily Ever After. Here in Epic Experiment, we usually choose function over form. However, winning the game with this combination of cards seems way too funny to pass on.

Let's talk about this interaction. Happily Ever After is a "You Win" card that needs some set-up in order to be effective (I wrote an article about it, here's the link). Doomsday is the perfect set-up card for it, as it stacks our deck, allowing us to have easy access to all the support we need.

For commander choices, Golos, Tireless Pilgrim is a perfect pick for this strategy. Its activated ability is really powerful on its own, and it allows us to dig through our Doomsday pile very fast. Golos's ETB trigger is also very helpful because it let us find high-value lands, like Urborg, Tomb of Yawgmoth and Cabal Coffers.

From top to bottom:

This is how this pile operates:

This pile allows us to start our extra turn with all the required pieces if we cast it with at least six life before casting Doomsday.

We have some backup for each piece other than Happily Ever After. They're easy to exchange, but some will often require some adaptation on our part.

As you can see, life is the one constant that we need to invest heavily in, and even then, we can't fully guarantee that we'll be successful. This means that life gain is crucial; that being said, investing heavily in our life total eases our burden on the combo turn. However, as important as life gain is to us, we're not including strictly life gain cards, as these effects tend to be nullified pretty quickly. Instead, we're using a wide array of strong life gain cards that pull double duty. Courser of Kruphix and Tatyova, Benthic Druid are constant sources of life gain. These might not seem much; however, during the course of a game they can add up. Cloudblazer, Elite Guardmage, and Knight of Autumn are one-shot effects, but they are less vulnerable to removal. The extra life buffer, coupled with the bodies, are an essential part of how we can stay afloat against more aggressive decks.

We also have a dedicated cost-reducing suite for Golos's activate ability. These cards aren't here to help us combo; instead, their job is to help us grind better. When we start getting to the point of being able to activate Golos's ability twice a turn, we're pretty much set, and there's a noticeable difference between needing 14 mana and needing 10 mana.

Golos's ETB is really powerful, especially in EDH where we have a huge pool of lands, but we are restricted to only one copy. This, together with Golos's activated ability, makes Golos tricky to deal with. Remove it, we get another powerful land; leave it alone, we start activating it. There's no escape.

Speaking of powerful lands, the iconic duo of Cabal Coffers and Urborg, Tomb of Yawgmoth is a quick way to get to the mana threshold that we need to combo off. Bojuka Bog can be a great graveyard hate if timed right. Field of the Dead is the best land when we're looking to grind out on longer games. Outside of those, we can always grab rainbow lands like Command Tower just for the color fixing they provide.

As far as back up win conditions we have a couple of decent options, both of which have their own dedicated Doomsday pile. It might not be as flavorful as Happily Ever After, but we should have some options just in case. Felidar Sovereign is a perfect fit for a deck that already has lots of life gain potential and also has easy access to Beacon of Immortality, Heroes Remembered, and extra turn effects. Debt to the Deathless's first job is to net us life, but we can also use it as a Fireball effect, especially with our untap effects. The best part is that since Doomsday also takes cards from the graveyard we don't need to keep holding it until we can K.O. our opponents.

Our opening hands have a bit of variance into them: we're a five-color deck that has a lot of combo pieces that we DON'T want to find before going off. Luckily for us, we can recover them in the late game with Doomsday (as long as they haven't been exiled), so we get some of those benefits even though it's not optimal.

The early game should be dedicated to ramp and color-fixing and protecting ourselves. An explosive start isn't necessarily good for us, so by building a strong foundation we'll transition better into the mid game, which is by far more important than trying to goldfish.

In the mid game, we should start looking for opportunities to combo lines, and they'll usually start by getting our commander online. While we need our Golos to combo out, we don't mind that much if it dies; in fact, Golos's ETB makes it that much attractive to keep casting it. One important mid game decision point is which land to choose for our first Golos's trigger: do we have either of the Coffers/Urborg combo in our hand (or have access to tutors for one of them)? Then we should get the other piece. Are we going for a slower game? Then Field of the Dead can provide useful chump blockers.

The late game is somewhat kind to us. Our commander is a really powerful draw engine, and it generates a "damned if you do, damned if you don't" situation to our opponents. We also have three ways to win the game, so it'll be pretty hard to get hated out of the game. That being said, the deck is vulnerable to being aggro'd out and relies on life points to win the game, so we can't be too reckless.

If we're already being the baddies, why not go full villain and invest heavier in prison elements? Propaganda and friends works similar to life gain cards (outside the combo, of course) by making our opponents have to choose between developing the board or attacking us. Thaumatic Compass and Maze of Ith each give us both political capital and make our attack taxes (attaxes?) that much more effective.

We could also invest in more life gain elements and rely on them to reach the late game. Retreat to Kazandu is a good constant source of life gain, especially in a deck like ours that is constantly triggering Landfall. Soul Warden effects are a great way to give us a lot of life very quickly; however, they tend to work more like a Fog effect than most cards(that's if we don't pair it with other prison elements).