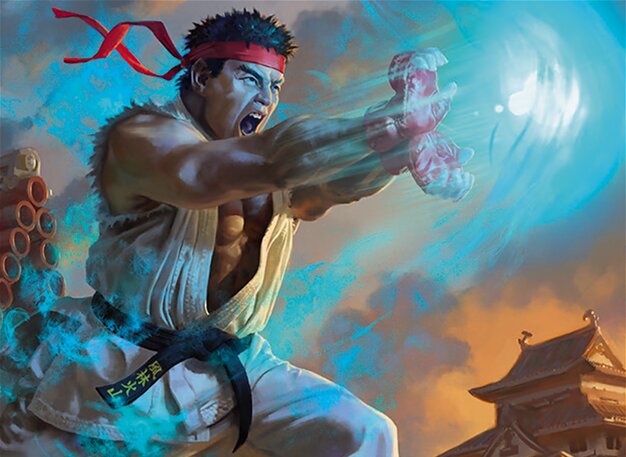 Ryu has a bit of an identity crisis. On the one hand, he's a cheap creature that rewards us for attacking by buffing himself up. On the other hand, the untap ability payoff is better used in a slower, non-aggro strategy, where paying five mana for a damage-based ping won't get in the way of our mana curve.

Ryu's activated ability has three costs attached that must be addressed: the heavy mana cost, the tap cost, and the support cost.

The first cost is the most obvious: paying five mana for some damage is a bad deal when our three opponents each have a starting life total of 40. Something like Zirda, the Dawnwaker could help mitigate this, but it's still a big setup. The second cost is not so obvious: to use his untap effect, we have to tap him in the first place. Attacking to tap him is the obvious choice, but it lacks the flexible timing of a tap ability and relies on us finding neutral attack on the board to make sure Ryu doesn't perish just because we want to use his ability. The last cost is more of a deckbuilding one: growing Ryu naturally through Training triggers is a losing battle in out format, so we need to either increase his power with outside sources, or give his damage an extra bit of pizazz, such as by giving him deathtouch. This isn't as much of a problem as the other two costs, but it limits our deck choices and likely skews our gameplay.

After we address all these issues, we'll get a fun commander to build around. It's fun to blast creatures with Ryu, and untap abilities are so easy to abuse that we can probably find a few neat interactions to play around. After all, Ryu seems like he might be a pretty good pilot, popping in to Crew Vehicle cards. But maybe we can go even deeper than that!

What if we use Ryu's discard as a way to fill our graveyard with creatures for reanimation spells? By using our commander's ability to control the board, we have a reliable discard outlet that gives us the time needed to stabilize.

The lack of black means that we are going to lose some of the better reanimation spells in the format, but that's fine! White has a decent enough repertoire of reanimation spells, and they seem to be printing more of them all the time. Breath of Life, Defy Death, Late to Dinner, and Resurrection are vanilla-lite reanimation spells that get the job done. Invoke Justice doesn't just revive, it also distributes +1/+1 counters, so it plays very well with our commander. Profound Journey is a bit expensive, but the sheer impact of getting two creatures from one spell shouldn't be underestimated.

Between red and white, we have plenty of big threats to reanimate. An early Zetalpa, Primal Dawn gets out of hand pretty fast, and it's also a pretty safe threat against most non-exile-based removals. Avacyn, Angel of Hope provides enough board protection to give time for our other threats to take over the game, while Utvara Hellkite is good at snowballing games where our opponents fail to find an answer for it. Gisela, Blade of Goldnight is a fast clock that also benefits our commander's activated ability.

Aside from those baddies, we also have a more utility-based creature suite that's meant to bridge the gap between threats and nonthreats. Combustible Gearhulk can put an unlucky opponent in check by either giving us three new cards or risk getting burned, and we also appreciate having cards thrown into our graveyard. Luminate Primordial and Meteor Golem are strong removal options too, and Serra's Emissary is just pure awesomeness.

Since we're not planning on triggering Ryu's Training all that much, having ways to maximize our activated ability is crucial if we want to destroy some creatures. Basilisk Collar and Gorgon's Head give our commander deathtouch, which allows us to both snipe any creature on board and draw a card from it. Madcap Skills andTaste for Mayhem are two cheap attack boosts that are just efficient enough to be worth consideration.

We're also packing a few alternative ways to tap our commander. Having a few good Vehicles can be handy for two reasons: they tend to have a high stat line, and they provide some board-wipe-safe utility before we need them. Cultivator's Caravan is a Manalith that can be a threat in a clutch, Unlicensed Hearse is powerful graveyard hate in a format where graveyard interactions are plenty, and Smuggler's Copter is another consistent source of looting.

Aside from these Vehicles, we have a few Auras that also give our commander a tap ability: Epiphany Storm and Prophetic Ravings allow us to cheaply dig for more cards and shape our graveyard; Burning Anger is another copy of Ryu's activated ability, which gives us a lot of flexibility in both sniping smaller creatures or take down bigger ones more easily; and Dual Casting is amazing in a deck that has powerful spells like our reanimation but also plays well with our many "Rummaging" effects, like Thrill of Possibility.

Our opening hands are flexible because we have a lot of digging power with our many cheap looting/rummaging effects, so even hands that might not have anything special going can turn on very quickly with some patience and a bit of luck. In general, we want to have at least one looting effect and a mana rock in our opening hand to get things going, but it helps a lot if we also have a huge creature to put in the graveyard, or if we start the game holding one of the reanimation spells to get it back.

Our early game is just about setup. We can cast Ryu early, but he doesn't do anything but look pretty for a little while. We aim for action in the mid-game, where we can finally start discarding and reanimating our huge threats while sniping our opponents' most pernicious creatures. By the late game, we won't need the reanimation spells to cheat mana costs anymore, since we can just hard cast our big baddies. Don't get me wrong, though - they don't become dead cards at all! If someone removes our creatures, we'll just bring them right back. And along the way, maybe we'll be able to have some snazzy fun with cheating those creatures into play in other ways... or perhaps even copying them!