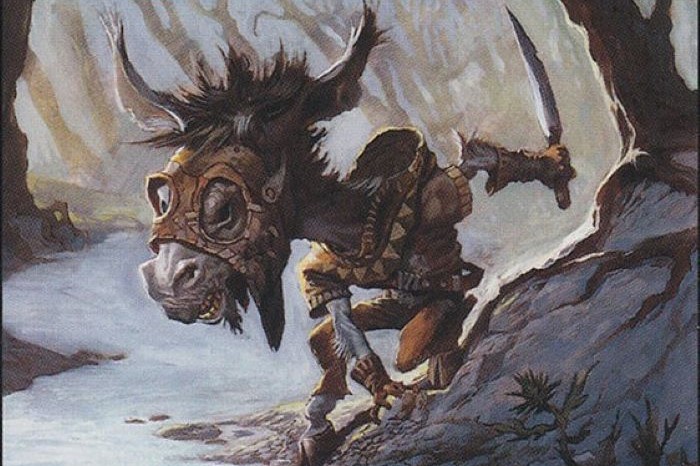 A Menagerie of Misfits

This installment, we'll be doing something a bit different. Rather than looking at specific keywords, or mechanics that haven't been quite keyworded yet (e.g. 'tunneling', 'Stalking'), we'll be looking at all the rest.

The leftovers, the misfits, the rejects, call them what you will. These are the cards that have or grant some weird and hyper-conditional form of evasion that's not exactly subsumed within a larger keyword or mechanic. Think River Darter.

Now, I know I'm really scraping the bottom of the barrel here, but we're here to look at evasion in all its forms and variation, not just the 'best' ones. So toss me that taping knife, point me to that hideous 1970's popcorn ceiling of yours, and I'll get to scraping. 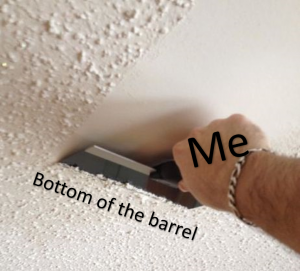 Mobs, Nobles, and Noggles, Oh My!

With no unifying keyword or mechanic to tether our remaining cards, I'm just going to lump some of the notable ones into a visual table. Our table of hyper-niche evasive cards can be broadly categorized as follows:

You'll notice some double-dip into other categories (e.g. Spire Tracer in 'Except by Flying' and 'Except by Reach').

You'll also notice some could ostensibly be keyworded, but aren't.

Skirk Shaman, for example, first appeared in Planar Chaos as the time-shifted version of Severed Legion — which had Fear. While Skirk Shaman doesn't have Fear, it does (effectively) have intimidate, meaning it can't be blocked except by artifact and/or red creatures. It's actually seeing a reprint in the new Time Spiral: Remastered, and it was one of Charlotte Sable's very own preview cards over at the Commander's Herald (go check it out!), but it's notably missing intimidate as a keyword.

Why, you ask? Well, Skirk Shaman's ability is even more niche than the deprecated keyword, since if Skirk Shaman's color were to change, say, to green due to a Distorting Lens or Scuttlemutt effect, it won't change Skirk Shaman's restriction of only being blocked by artifact or red creatures. In essence, Skirk Shaman has intimidate in all cases where its own color doesn't change, and if it were to, it then just has a red-shifted Fear.

That's how niche some of these are — more niche than the aye-aye and its long middle finger, than basilisks who sprint across water, or birds that create homes decorated with trinkets. Transplant any of these guys outside of their environments, and there's sure to be a disastrous mismatch.

So how likely is such a mismatch to occur? Well, one way we can tackle it is by looking at each of the specified creature's evasive potential above against the number of decks and subsequent representation (percentage, %) of overall decks scraped by EDHREC. I'll do a crude approximation, analyzing the:

In essence, if we want to get a sense of how evasive Audacious Infiltrator could be, we can look at:

We repeat this for all the specified categories above, and we get: 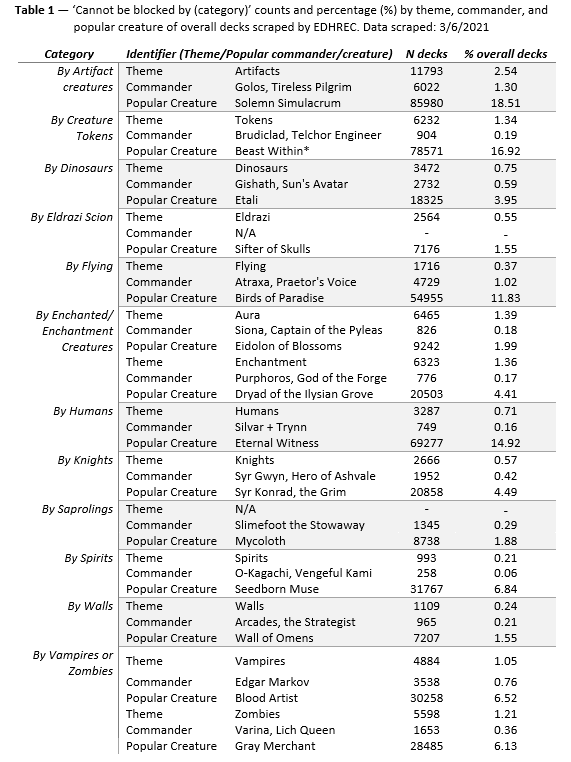 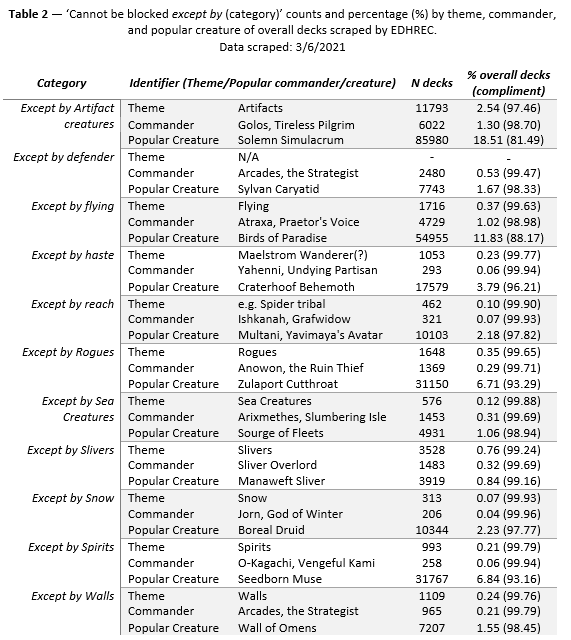 Let's say you sign on to a game of vEDH on SpellTable with 3 random strangers. You may think the coast is clear for your Deathcult Rogue if no one sits down with a Anowon the Ruin Thief deck (1,648, 0.35% of overall decks scraped). However, 6.71% of all decks scraped by EDHREC contain a Zulaport Cutthroat, which means if someone is running black and they're looking for death triggers (it's black after all), you just may not get through to that player. Not to mention Changelings!

Which all goes to say: this is a pretty crude way to go about this, and frankly, most (all?) of these cards are meta-calls. If you have a Gishath, Sun's Avatar player in your playgroup that you play against constantly, by all means you could throw your River Darter in that Kumena, Tyrant of Orazca of yours. But chances are, you're just better off with almost any other Merfolk.

In fact, some really are 'draft chaff'-level cards that were designed for a Limited environment, and are often parasitic to the set, theme, and block they were designed in.

But there are plenty of others that shine! Seasoned players will note some that are all-stars in Edric, Spymaster of Trest-style decks, like Spire Tracer, Treetop Scout, or even Gingerbrute. Tin-Street Dodger can pull its weight in something like Grenzo, Havoc Raiser or Subira, Tulzidi Caravanner, and Prowler's Helm is a worthy consideration for any Voltron build.

A crude and difficult means of evaluating their efficacy? Check.

There's just one thing left to do: make a decklist.

Since we're already scraping the bottom of the barrel, I'd be remiss to not mention one of my favorite creatures with a niche evasive condition, and happens to be a commander option, permitted you have an honest Rule 0 conversation with your playgroup/pod first. None other than: Phoebe, Head of S.N.E.A.K. 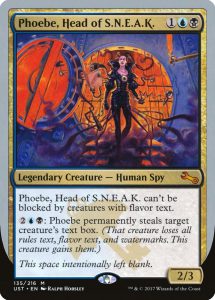 First of all, if you haven't seen our very own Joseph Shultz's dive into Phoebe and how she fares against the similar black-bordered counterpart, Lazav, Dimir Mastermind, I encourage you to do so!

Phoebe's activated ability is strong — no question there. The ability to steal other creature's text boxes and pile them on to your own essentially lets you two-for-one for the cost of 2UB (or just UB with a Training Grounds!). You're essentially getting to Control Magic all of the effects of someone's creature while leaving the empty vessel of the creature itself. Say we're playing against a Yarok, the Desecrated deck spewing value all over the board. Mana provided, we can systematically rob those creatures of their textboxes, one by one, leaving them almost Humble versions of their formal selves. 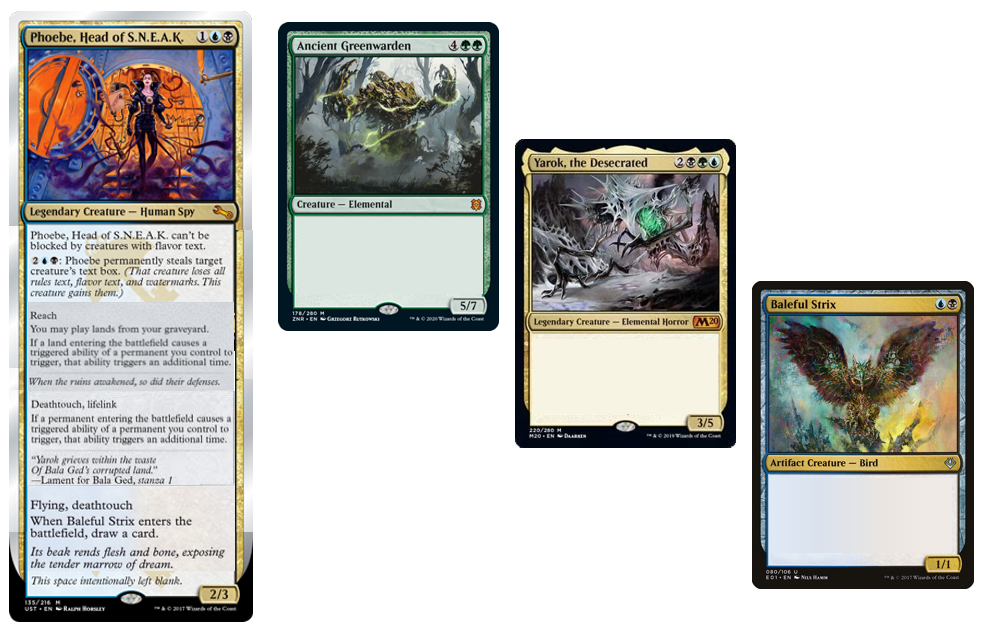 Since 2017 when she was first spoiled, we've subsequently gotten the Mutate mechanic in Ikoria: Lair of Behemoths (2020) which has some similarities with Phoebe in piling multiple effects onto one creature. Her similarities with Mutate, Mairsil, the Pretender, Volrath, the Shapestealer, and Lazav, Dimir Mastermind make Phoebe potentially potent, but I think they were genius in the evasive aspect, which is what we're focusing on here.

If Phoebe steals the text box of an opponent's creature that had flavor text, she will now acquire that very flavor text, thus making the creature eligible to block her. What she gains in abilities, she loses in her own nascent evasive potential. And since she doesn't acquire the power or toughness of the creature (just the text box), that creature stands a good chance of blocking Phoebe's base 2/3 body.

So just how evasive is Phoebe? Let's start by looking at flavor text.

I'll do a quick survey of the top 200 commanders and top 200 popular creatures in our format, as scraped by EDHREC, and tally up our number and proportion that have flavor text. While we could do more, the top 200 commanders represent 67. 61% of all decks scraped by EDHREC, so I'm fairly comfy with this number to get a quick pulse on how likely we may encounter flavor text.

Generally, it looks like Phoebe is evasive against about ~40% in of popular commanders in the last two years, and ~65% of the most popular creatures. Generally speaking, if the card has a novel of text on it, then it's much less likely to have flavor text. Though it's worth noting that there are some weird variants out there, like Phoebe being unblocked by one version of Garruk's Gorehorn but blocked by the other. 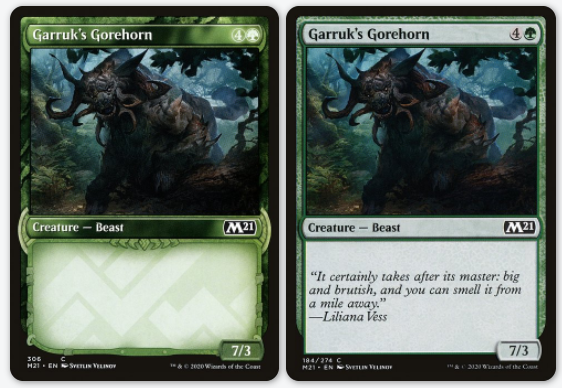 Outside of stealing our opponents' creatures' text boxes, we have a standard array of juicy targets for Phoebe, Head of S.N.E.A.K., like the flip side of Elusive Tormentor (Insidious Mist) or Invisible Stalker. Since Phoebe doesn't acquire the power and toughness, we have a few creatures that can scale better, like Consuming Aberration, Body of Knowledge, or Master of Etherium. As her rules state, Phoebe has the last acquired value, so be careful of the order in which you acquire the text box of */* creatures!

In his article, Joey with great genius recommended a consideration for March of the Machines, as by animating artifacts you can shut off opponents' mana rocks (by stealing their text boxes) and turn Phoebe into a mana-dork herself. Further, it allows her to potentially acquire some of your own unique artifacts abilities and texts. Joey's recommendation was so neat, it inspired me to lean into the idea, hard. Thanks for the idea, Joey, we do indeed stand on the shoulders of giants.

Phoebe cannot only Crew Vehicles, but even become them. Similar to Mairsil, the Pretender exiling a Vehicle with a cage counter, Phoebe can acquire the text of a Crewed Vehicle to subsequently become a Vehicle herself, allowing other creatures to Crew her. This means that she won't be a creature unless Crewed, but if she is Crewed, she will retain the other text she nascently has or acquired, like her evasive condition or even other effects. While the Vehicles will just now be empty artifacts, they can still net us advantages with cards like Blinkmoth Urn, Krark-Clan Ironworks, Costly Plunder, Reprocess, Arcbound Ravager or Cranial Plating. We can even just exchange them for a better artifact with Daring Thief.

There's also some neat synergies with the Crew-ers (crew?). Say we have Phoebe who has acquired Wake Thrasher's text box. When it comes to our turn, Phoebe will get a big power burst from untapping all of our permanents that lasts until end of turn. We can then swing in with our evasive commander, or even acquire Marionette Master's text box, and if we sacrifice an artifact (or two, or three...), we can begin draining for large portions of life. Acquiring Marionette Master's text box gets even better when we can also acquire Consuming Aberration's or Master of Etherium's text as well.

Putting it all together:

Overall, I love Phoebe's design and open-ended potential, but I fully understand some playgroups and people just can't get behind her. I think Silas Renn, Seeker Adept could make a fine substitute, as he has the colors, evasion, and flavor as well. Bonus points for running Spy Kit and associated combos!

As we near the end of our tour of evasive mechanics, I can't help but look fondly at some of the niche cards above and hope for more support down the road. Personally, I'd love for more Noggle Bandit variants, but maybe that's because a Donkey-Rogue with conditional (but arguably effective) evasion in Izzet colors of all things just makes me smile.

What do you think? Do you run any hyper-niche forms of evasion in your decks that you swear by? Have you lost to a Serpent of Yawning Depths as many times as I have? Sound off in the comments below!