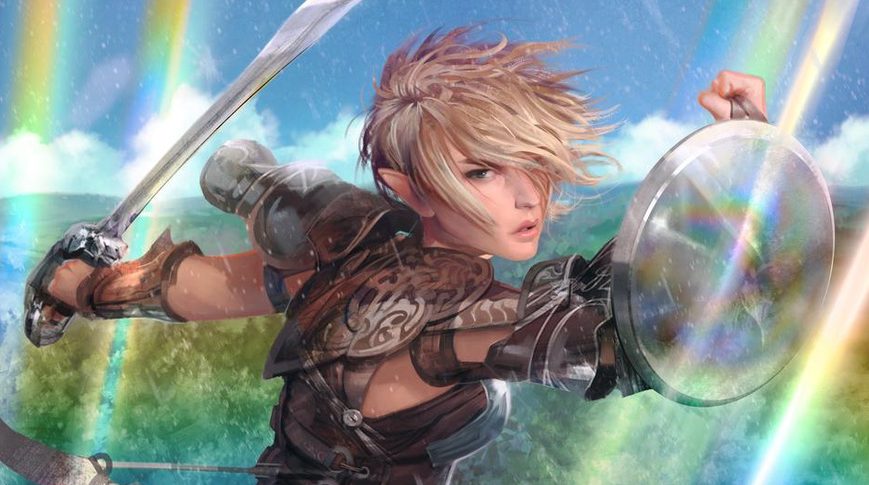 Greetings sleuths, saboteurs, skulkers! Welcome to another installment of Evasive Maneuvers, where we examine keywords and strategies that help get our creatures through during combat.

This week we'll be taking a look at none other than: protection. Originally developed in Alpha, the mechanic is about as old as Magic: the Gathering, itself. Unlike our previous keywords like Fear, Flanking, Horsemanship and Shadow, which racked up high Storm Scale numbers, protection is a keyword that is considered deciduous, which, other than invoking some tree- or tooth-related metaphor, means it's bound to show up every once in a while.

The future of protection is best left to Mark Rosewater, who stated in his June 24, 2019 article about Core Set 2020:

I'm not quite sure about the future of protection, but it seems to be on one of two paths—either a return to evergreen status or a staying deciduous but with a heavier use in Standard-legal sets.

The big question remains: what does protection, a mechanic with a defensive connotation, have to do with evasion?

Mechanically speaking, protection has more to do than just shielding one's self. In fact, any fellow college or grad student such as myself will have an easy time remembering the acronym for how protection works: D.E.B.T. Creatures with protection from [quality] cannot be:

Normally, I'm a big advocate for removing silent letters, even against historical etymology, but in this case, that silent B is just what we care about.¹ We'll be diving headfirst into that very letter that dashed children's hopes and dreams at their first ever spelling bee.

¹English unabashedly continues to hold on to its silent letters. Without a doubt, I think it’s pretty dumb.

The Best Offense Is a Good Defense

Little did I know that this maxim of many (all?) of my childhood soccer coaches would have turned out to be true. We can use protection offensively so long as the defending player has the qualities our protection specifies. Like Achilles having protection from non-ankle-aimed projectiles, he's able to use that offensively against big bad Boagrius.

Of course, protection is also a fantastic mechanic for exactly what it indexes: protection. Committing to the board in EDH is always a risk, and protection effects help to mitigate against so much of the potential issues those of us who like to play with our cards face up (okay, and you Morph tribal folks) might encounter. It pulls double duty for us here, which is a big advantage.

While not as insular as other keywords like Shadow, protection is generally quite specific in the quality it grants. Outside of something like Progenitus or Hexdrinker — who have no ankles that went un-dipped in the River of Styx like their Haktos the Unscarred counterpart and therefore have protection from everything — most instances protection are accompanied by a specific quality.

Given the variability of protection in specifying a quality, it's best to start by characterizing what types of protection are at our disposal. Here's what we get: 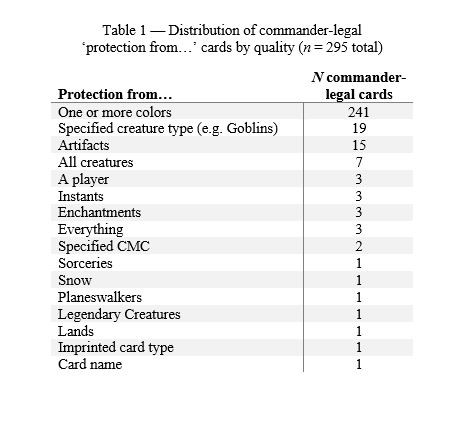 Notably, some of the cards overlap between categories (e.g. Devoted Caretaker gives protection from instants and sorceries, despite me separating them heuristically). Generally speaking, though, the vast majority of protection cards care about colors.

Anyone who has faced against an Animar, Soul of Elements deck knows that having access to a combo machine/Eldrazi coupon with protection from 20% of the color pie can feel pretty frustrating. Given the majority of cards with protection care about colors, let's focus on that a bit.

Similar to when we looked at Fear/Intimidate, we need to understand how the colors of our opponents' commanders may pose a problem for us; in this case, as potential blockers. By summing the total number of decks for each non-planeswalker (since they can't block) commander from EDHREC, we can then see how the weighted proportion of each color stacks up to the overall number of decks scraped by EDHREC. Doing so gives us a pretty good picture of what the color distribution of any given commander is that we might face. Here are the results: 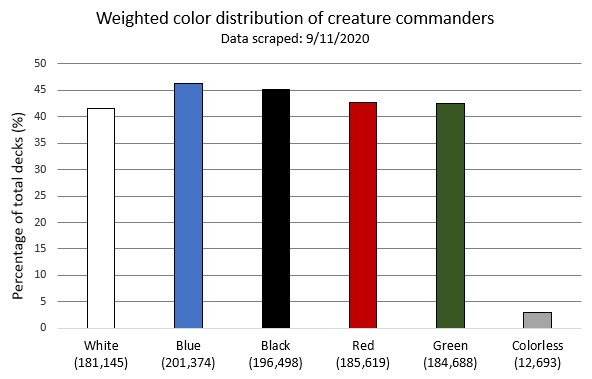 As for the colors of the top 100 creatures weighted by number of decklists, we see the breakdown is: 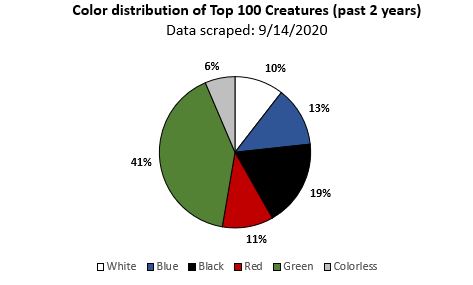 Unsurprisingly, green continues to boast the highest density of creatures, meaning protection from green is likely to go quite a long ways.

For our purposes, protection is almost the inverse of Fear/Intimidate, which are hampered by opponents having access to more colors, as they are more likely to be blocked. Protection benefits from opponents having more colors — the more colors that your opponents' creatures have, the more likely that your protection from a given color will work. As an example: Bellowing Tanglewurm can be blocked by Korvold, Fae-Cursed King, while Blightbeetle cannot (plus, Blightbeetle will prevent a lot of Korvold, Fae-Cursed King's ridiculous bloating from doing something as simple as cracking an Evolving Wilds).

The downside is: the color distributions of commanders are relatively even. How do we ensure our Knight of Glory won't just be useless if no one is running the color of necromancy? I'll tell you how: grab your paint brushes.

As any aspiring alter-ist or even Jumbo Commander's DJ will tell you: if you can't match the original paints, add your own. We'll be taking a similar approach with color-'hack'ing effects. 'Hack' decks use color-changing effects such as Sleight of Mind to alter the specific color words specified on a card to enable new effects and possibilities. Weirdly enough, 'hack' decks originate in name from Magical Hack, despite many of the decks not actually using it since it cares about lands rather than color.

Cards like this allow our Knight of Glory's protection from black to be altered at instant speed to any color we see fit. With white's affinity for creatures with protection from [color(s)], and blue's potential to change said colors, I think an Azorius painting deck is just what we need.

Instead of just color-hosing and stax, we'll be using Blind Seer (a.k.a Urza, Lord High Artificer dressed up like Raiden for Halloween) for evasive purposes. Eight-and-a-Half-Tails similarly allows us to mess with colors, and has as much potential for shenanigans as he has hyphens. Scuttlemutt and Tidal Visionary similarly have real artistic potential, and Distorting Lens acts as another repeatable means of color-shifting. Insight is an underappreciated card, and knowing now that 42% of commanders are green and 41% of the top creatures are green, we're destined to draw some cards even if we don't have to color-shift them with something like Shifting Sky.

We'll also include a heavy 'palette' of color-shifting instants, which all happen to come in at two CMC or less, making them perfect candidates for our paintbrush: Isochron Scepter. In addition to making our creatures evasive, we can 'touch up' some of the 'blemishes' on our opponents' creatures: 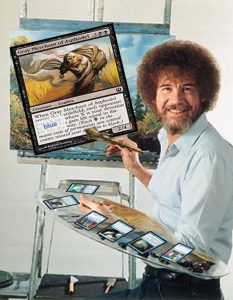 A Touch of White for Blending...

While blue provides our artistic re-coloring, white provides us with more protection and closing potential.

Mother of Runes, Giver of Runes, and Samite Elder all give our creatures protection in one form or another (Armored Guardian is another neat consideration, albeit expensive mana-wise). Paladin en-Vec, Mirran Crusader, Jodah's Avenger, and Tivadar of Thorn act as some of our efficient pro-color beaters. Lightwielder Paladin, and Lavinia of the Tenth act as some neat removal options, though Dismiss into Dream could be pretty hilarious here as well. Pilgrim of Justice and Burrenton Forge-Tender can be used as beaters or blockers, and each comes with an upside of preventing damage-based blowouts from your resident Neheb, the Eternal in a pinch. 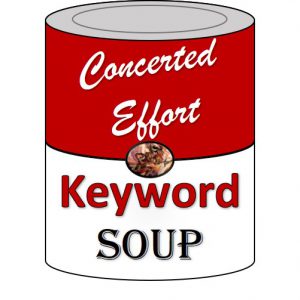 Finally, Concerted Effort is basically the equivalent of keyword-soup-in-a-can, spreading keywords to the rest of our creatures every upkeep. Notably, it spreads the qualities specified by the protection clause, and they stack, so if we have a Paladin en-Vec and a Beloved Chaplain, all of our creatures will have first strike, protection from creatures, from black, and from red. Every. Upkeep.

Brushes and Palette: A Painter's Swords and Shield

Thanks to some efficient beaters and color-changing, we can close out the game with the Swords of X+Y. Staring down a Korvold, Fae-Cursed King but we only have a Sword of Truth and Justice out? No problem. We can use one of our color 'hack' spells either to change Korvold himself, or even just the protection color on the Sword.

In this shell, any of the Swords can get a fresh coat of paint at a moment's notice to become Sword of Feast and Justice, or Sword of Sinew and Famine (yikes). Protection will make our creatures both difficult to remove and evasive, all while boosting our creatures and giving us some sweet combat damage triggers. The double-strike of Mirran Crusader, Jodah's Avenger, and Silverblade Paladin shouldn't be overlooked — we get twice the damage and combat triggers when they're Equipped!

For defense, we can lean on cards like Pariah's Shield to protect our own life total by funneling the damage into a creature that has protections, and on Brave the Sands to be able to swing in and protect against crack-back (as you'll see shortly, it also synergizes with our commander). I emphasized Equipment rather than Auras, as the latter can fall off if the creature is granted protection from their same color.

The recently reprinted Stonehewer Giant will help us grab our brushes and paints when we need them, though a Stoneforge Mystic would also be welcome. After all, it's half of the Stoneblade archetype's namesake.

Putting it all together, and voilà:

What do you think? Is this enough to make Monet laugh maniacally, or Klimt to cackle considerably? Do you find yourself using protection more offensively than defensively? Sound off in the comments below!