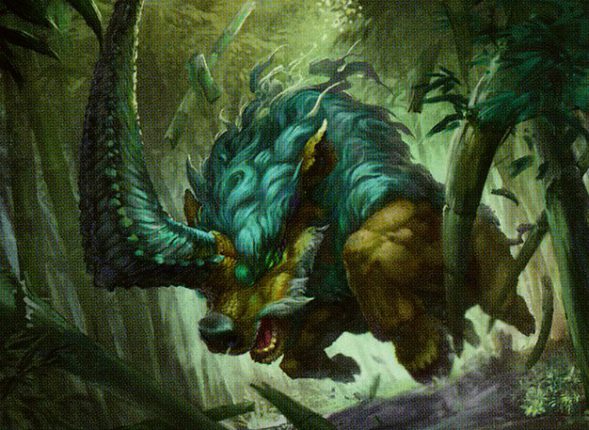 Greetings sleuths, saboteurs, skulkers! Welcome to another installment of Evasive Maneuvers, where we examine keywords and strategies that help get our creatures through during combat. This week there'll be no sleuthing, sabotaging, or skulking about. It's trample time.

First introduced in Alpha, trample is evergreen, meaning it's likely to be found in any set or product. Interestingly, trample did take a hiatus starting in Sixth Edition, as Wizards of the Coast thought it was a bit too confusing, instead temporarily replacing it with the cadre of Lone Wolf, Pride of Lions, and Thorn Elemental.

Not surprisingly, these creatures created a bit more confusion than the original trample, so by Ninth Edition, trample returned for good!

Trample rewards power. Higher power translates to not only bigger potential for removing an opponent's blocker, but more damage that gets through. As a keyword, trample can almost single-handedly negate the effectiveness of 'chump blockers' — creatures who typically pale in comparison with their power and toughness, but will valiantly negate any incoming damage as a blocker.

Let's start by looking at the color identity distribution of Commander-legal cards that have or grant trample: 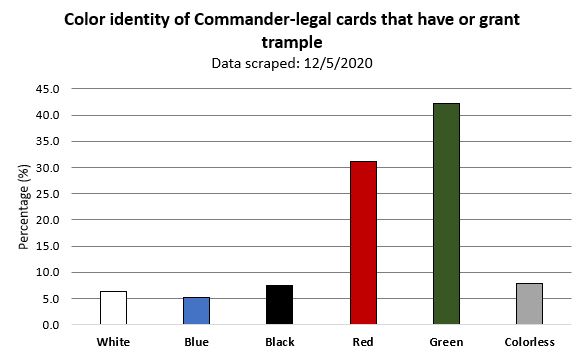 Unsurprisingly, the evasive keyword that emphasizes 'smash' is found predominately in the Gruul colors — the very guild whose 'charm' (Gruul Charm) a rock tied to a stick that could graciously be called a "hammer", and whose the guild leader's flavor text being about as subtle as a rack of spare ribs doused in two-million Scoville units of Carolina Reaper sauce.

In terms of evasive viability, trample is extremely viable so long as you have enough power. Let's look at the power and toughness of the top commanders and top 100 creatures, as scraped by EDHREC, and see what we're up against:

As I stated in the Flanking installment, central tendencies can be helpful, but they sometimes Swamp out meaningful variation or nuances. For our purposes, we're primarily interested in the toughness of popular commanders and creatures to see how much of our trampling might be negated. It's noteworthy that most of the popular commanders huddle around ~4 toughness, suggesting that we want at least 5 power or more if we think our opponents might use their commanders as blockers when push comes to shove.

The Top 100 creatures are even punier, falling around ~2 toughness. This may seem like a good thing for trample — and indeed it is — but remember that popular creatures tend to be generic ones that help to round out the early game, such as cards that ramp (e.g. Sakura-Tribe Elder) or that provide some generic utility (e.g. Baleful Strix). For trample to be most effective, it behooves us to lean into power, hard, so that, like the Juggernaut, nothing can can stop us!

As of now (12/5/2020) and after the release of Commander Legends, there are 59 commanders that innately have trample, and another 25 commanders that can either obtain or grant trample to other creatures (for a total of 84). With nearly 85 trample-themed commanders to choose from, there seems like quite a few options. For me, there's only one option: the O.G., Hagrid-headed, gnarly, axe-wielding, cape-wearing centaur himself: Stonebrow, Krosan Hero.

Yes, you have your Zilortha, Strength Incarnate, or your keyword spreaders like Akroma, Vision of Ixidor or Odric, Lunarch Marshal, but none are so thematic as Ole' Stonebrow. Toss a flannel on this guy, and you'll have Paul Bunyan rolling in his grave in fear, entire forests trembling, and every diner north or west of the Rockies begging he stops by to drop serious coin on their Lumberjack Slam. Stonebrow, Krosan Hero's strength comes from his simple design: play creatures with trample (or give creatures trample), and you get an anthem. No smoke and mirrors, no frills, no nonsense.

In fact, let's take a look at the average Stonebrow deck to get some ideas:

With 70% of the deck either lands or creatures, the rest of the deck leaves us with more ramp, interaction, removal, and more pump-effects. With almost 70% of the creatures innately having trample (25% of the whole deck) and the rest either helping us with ramp (e.g. Sakura-Tribe Elder) or draw (e.g. Beast Whisperer), I like where this is at, especially since we have additional ways of granting creatures trample (e.g. Brawn, Archetype of Aggression).

While I'm all for playing creatures and turning them perpendicular, what if we can tinker with Ole' Stonebrow just a tad to make some of the damage more...surprising?

Belle of the Ball Lightning

Years ago, our very own Quinn Miller wrote an amazing article on Saskia, the Unyielding leading a list themed around Ball Lightning. As an eager reader, I loved the idea and brewed a version I could right away with what cards I had laying around and with budgetary constraints. The budget, it turns out, did me in. Outside of landing a lucky Chromatic Lantern, I didn't have the finances for a good-enough mana-base to be able to effectively cast most of the awesome Groundbreaker-type cards.

In keeping with the theme while also acknowledging these constraints, why not try out a Ball Lightning sub-theme in Stonebrow, Krosan Hero? Nearly all the Ball Lightning variants come with some distinct advantages:

Point number five is particularly noteworthy, as it allows us to get in some extra damage without telegraphing it. It makes opponents that are unfamiliar with our strategy prone to blowouts, and those that are familiar with it have to keep guessing whether we can barrel out a Ball Lightning out of nowhere.

Furthermore, it makes the Ball Lightning et al. more like efficient sorceries than creatures. While Wizards has yet to print trample on an instant or sorcery, they teased us with the silver-bordered Super-Duper Death Ray. The mad lads actually printed (functionally) the same card in Flame Spill. Until the day we actually get trample on instants or sorceries, Ball Lightning might just be our second-best bet.

We'll run a nice package of cards that synergize with our Ball Lightning effects while trying to keep to under $20 for our splashier cards:

With an onslaught of Ball Lightnings, our opponents are likely to feel like poor Justin, where no amount of the mnemonics (see: the five "D's" of Dodgeball) could save him.

What I enjoy about this list is that it retains a stompy, power-matters design, but it also has some neat interactions and layering of triggers to keep things interesting. There's also a lot of room for tinkering, as extra combat effects (e.g. Moraug, Fury of Akoum) work wondrously with Stonebrow Krosan Hero, since the +2/+2 buffs stack with each successive combat, as well as upgrades with bombs like Pathbreaker Ibex and The Great Henge.

Trample is a classic keyword that just screams 'smash' more than The Incredible Hulk, himself. As a form of evasion that rewards you for simply getting bigger and thus dealing more damage, it forces uncomfortable blocking decisions for your opponents, often having them dip out faster than Kevin O'Leary after a bad pitch. 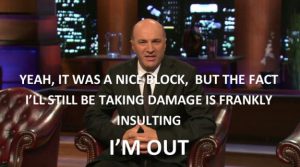 What do y'all think? Do you enjoy trample's 'life total, meet fist' approach, or do you prefer something subtler? Sound off in the comments below!