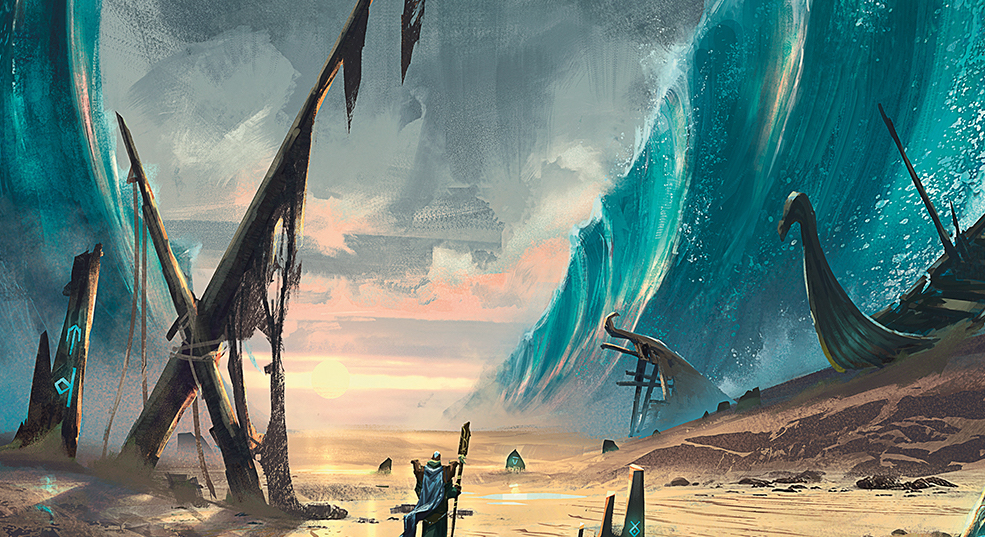 In this installment of Family Feud, father and son (Mark & Max) will discuss their specific upgrades to the Kaldheim preconstructed decks and playtest results. Their goal was to create solid mid-tier decks that could easily compete at your local game night for around a total price of around $100 each (including the price of the precon).

One of the first decisions to make in upgrading Lathril, Blade of the Elves is determining which direction, with regards to theme, to take her. Lathril can be a Voltron commander or a more traditional Elf Tribal. You could even go with a sacrifice theme with all the tokens. After playtesting, I settled on an Elf Tribal strategy, leveraging Lathril’s abilities to create Elf tokens and ping my opponents, while padding my life total, with supporting minor lifegain and deathtouch subthemes. Another important goal of mine was to lower the overall CMC of the deck, improve the interaction, and have the deck play faster.

I’ve added some of the top Elf Tribal cards in the game, including Ezuri, Renegade Leader, Elvish Champion, and Freyalise, Llanowar’s Fury. Each of these are very solid, with Ezuri providing regeneration and pump to our creatures, Elvish Champion providing buff and Forestwalk to all Elves, and Freyalise having three solid abilities that each synergize with our strategy. Freyalise is a personal favorite of mine and is fantastic in this deck.

The deck’s ramp is improved with additions of Llanowar Elves, Fyndhorn Elves, and Arbor Elf to ramp earlier and start swinging with Lathril. Copperhorn Scout and Wirewood Lodge help leverage Lathril’s second ability but can help us in other ways as well by providing pseudo-vigilance, etc. I’ve added a strong finisher in Beastmaster Ascension, a nice one-sided board wipe, In Garruk’s Wake, and one the best protection cards in the format for our Elf army, Heroic Intervention.

The removal package is improved with Beast Within and Elvish Dreadlord. Most lands that come in tapped are now removed from the deck unless they offer a specific utility. With a lower CMC now and plenty of mana-producers, this deck can run out of gas pretty easily, as some of the card draw is situational. Because of this, I really beefed up the card draw with Soul of the Harvest, Harmonize, Vanquisher’s Banner, and the 1/1 token card draw all-star, Skullclamp

I ended up replacing 35 cards from the Precon, but many of the replacements are inexpensive Elf staples that you may already own, as I did. The overall mix of card type is fairly consistent. I was able to reduce the overall CMC from 3.6 in the Precon to 3.27 while improving the overall playability and power of the deck. The card draw, ramp, removal spells, and wincons are all now dramatically improved in this deck.

Of the 540 Lathril decks at time of writing listed in EDHREC, Ochran Assassin only appears in 18 of them. Ochran Assassin has a CMC of only 3, and it forces an opponent to block with all of their creatures, effectively leaving them open for attack and allowing us to pick off one of their creatures with its deathtouch. Max rolls his eyes at the choice, but I think that’s solid value. I toyed around with Lightning Greaves and Swiftfoot Boots for protection/haste for our commander, but settled on haste for all our creatures with Crashing Drawbridge. In general I think this card is underplayed. It’s a great play on turn two or three that still helps in all phases of the game. In a deck like this that wants to attack, I think it's a solid inclusion.

Witch’s Cottage is another card that I don’t see in many decks. It appears in only three other Lathril decks right now. Cottage is never a dead card and can get us back a key creature, like Ezuri or even our commander, saving us commander tax.

Head-to-head matches vs. Max’s upgraded Phantom Premonition deck continued to be a challenge with his team of flyers, the ability to blink to avoid removal, and Foretell, but the matches were much more competitive than pre-upgrade. Bonus tip: if you want to play head-to-head vs. Phantom Premonition, leave in Jagged-Scar Archers and add Lys Alana Bowmaster to the deck. These two creatures with the ability to destroy flyers are a nightmare for that deck. In one such game I rode these cards to an easy victory by killing all his tokens (and gaining life with Wellwisher).

In multiplayer games, however, is still where this deck shines. More players allow the runway to establish the token army, and the deck is generally very competitive, especially at this budget point. Lathril's second ability is strong and can sneak up on unsuspecting players. We can also win without Lathril should she become too expensive to cast. Some of our other Elves can become huge threats on their own, like Abomination of Llanowar. In terms of my goal in creating a deck that can hang better against Max’s deck 1v1, can compete at the mid-tier, and play stronger and smoother in multiplayer and overall by more enjoyable, I’d say “Mission Accomplished”. Overall, a fun deck to play with plenty of Elf tribal cards available to tweak to your playgroup and personal liking.

My goal was to make this deck stronger and more consistent from game to game. My approach was primarily upgrading the weaker cards and removing cards that are not on theme with Foretell, blink, etc. First up was taking out the cards that didn’t really fit our gameplan, like Ghostly Prison, Windfall, and Tales of the Ancestors. The next thing I did was find the cards that didn’t have a big impact on the game or weren't very powerful, like Hero of Bretagard and Mist Raven. Then I decided to cut the cards that had simply better replacements available, like replacing Kor Cartographer with Solemn Simulacrum.

First up was to improve the interaction. Amphin Mutineer was a solid choice to improve the precon's removal spells (I’m looking at you, Iron Verdict!). Another protection upgrade I added is Drogskol Captain.

Next, I looked at improving the ramp. Solemn Simulacrum, Mox Tantalite and Knight of the White Orchid were all added, with the Knight being the best of them.

The blink effect gets an upgrade with the solid Thassa, Deep-Dwelling, which is also very hard to remove. I’ve added a better blink target in Harmonious Archon, which doubles as a pump card, and which can throw off "power matters" decks, like Xenagos, God of Revels, and "toughness matters" decks, like Arcades, the Strategist. I also add Yorion, Sky Nomad to blink our whole battlefield when desired. Yorion also doubles up as a good blink target.

Of the 231 Ranar decks at time of writing listed in EDHREC, Azor, the Lawbringer only appears in 7 of them. Azor does double duty for our deck being board wipe protection and a consistent card draw engine. Azor is especially good in our deck because we play Soulherder and Thassa, Deep-Dwelling. I know I already mentioned Harmonious Archon, but it's just that powerful. In general I think this card is underrated. The problem with most blink targets is that they don’t do anything after their ETB trigger goes off, but the Archon continues to work for us, pumping our tokens and lowering our enemies’ creature power. It only appears in nine total Ranar decks at the time of writing!

The last card I want to talk about is Heraldic Banner (21 decks), a mana rock with a pump effect that is amazing for a go-wide deck like this one. It's subtle but powerful so definitely make space for it.

In head-to-head matches vs. Dad’s upgraded Lathril deck, I continued to handle him pretty easily with my team of flyers, endless pump effects, and tons of card advantage. The games were, however, more competitive than with the out-of-the-box pre-cons. Bonus tip: If you see Jagged-Scar Archers or Lys Alana Bowmaster, remove them immediately!

In multiplayer games, this deck was still highly effective in every match and a fun deck to pilot. Our flying 1/1s without a pump effect still struggle at times to impact a multiplayer game but can become card draw fodder for Skullclamp. Overall, in terms of my goal to create a more focused, consistent deck, I'm pleased with the results. This a fun deck to play and much more competitive with the upgrades. It doesn’t have as broad a catalog of upgrade options as Dad’s Elf deck, but it offers a fun and unique style of play. I hope WotC continues to support the Foretell mechanic.

Max started playing Magic at camp, M15 set. When he's not in school, playing EDH or tweaking his beloved Teysa deck, he is playing baseball, basketball and football. Mark (Max's Dad) agreed to a quick game with Max one day and got hooked. In addition to Magic, he enjoys golfing, skiing, coaching sports teams, playing music and spending time with his family. They live in the Boston area.