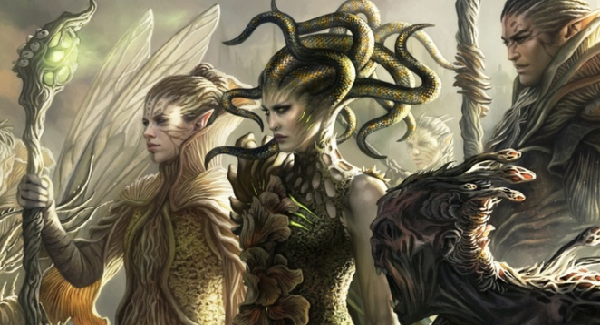 For me, the city of Ravnica is a place of nostalgia. When I first started playing casually in college, Ravnica: City of Guilds had just been released. I bought intro decks and packs and proceeded to play really badly with my friends. Then, when I got into Magic more seriously and transitioned to Commander, Return to Ravnica hit the scene and blew the format up. Now we're going back again with Guilds of Ravnica and I could not be more excited! We get so many things that scream EDH and Ravnica to me: Guildmages, split cards, guild leaders, hybrid cards, and more! If you've been playing for awhile, or if you're just getting into the game or into EDH, I hope you're as excited as I am.

I am very pleased to talk with you today about the Golgari cards of the set. Many of these cards feature the new guild mechanic Undergrowth, which gives you benefits based on the number of creatures in your graveyard. As usual, I'll include a deck list featuring some of the cards coming out in the set at the end of the article. Let's get to it! Moodmark Painter is a pretty good finisher in any number of black-inclusive decks. If you combine it with a repeatable sacrifice outlet like Viscera Seer or Phyrexian Tower and repeatable reanimation like Dawn of the Dead or Sheoldred, Whispering One, you end up with a really big throwaway attacker each turn that has evasion tacked on. Deece! Undercity Uprising is just fun. Giving deathtouch to your whole team is a fine way to get damage through - sort of a green/black Overrun without any pump - but on top of that, it acts as a removal spell, letting your dinkiest dork boop an opponent's beefiest fatty before you even swing. This works best in aggro swarm builds like Mazirek, Kraul Death Priest or Izoni, Thousand-Eyed. Golgari Findbroker is the kind of effect you'll instinctively want to run in decks like Karador, Ghost Chieftain, Shattergang Brothers and Muldrotha, the Gravetide. However, on a second read though, it has the same mana cost as Jarad, Golgari Lich Lord, and he's not exactly notorious for being easy to cast. If I did decide to run this, I would make sure it was in a deck like Vaevictis Asmadi, the Dire or Meren of Clan Nel Toth, with built-in ways to cheat it into play so I didn't have to worry about the color-heavy cost. Remember also that this only returns permanent cards, not instant or sorceries; Eternal Witness 2.0 this card is not. Molderhulk. Wow. This card is fantastic from a pure value perspective, letting you reuse your Srip Mine or Blighted Woodland. It just gets better when you consider it for a lands-matter build. It's a little bit of a mixed card, since lands-matter decks typically eschew a heavy reliance on creatures, but cards like Sakura-tribe Elder, Burnished Hart, and Viridian Emissary can be included to ramp you up and fuel Molderhulk's Undergrowth ability. Even cards like Ramunap Excavator and Ulvenwald Hydra can provide incidental value when they die. I think this card will be a particular all-star in Vaevictis Asmadi, the Dire lands-matter builds. Necrotic Wound might not ordinarily make the cut for a set review. It's a -X/-X instant speed removal spell for a single black. That's pretty good, but we've seen cards like this before, and the card is weak to graveyard hate. The thing that makes it worth talking about is that little phrase at the end of the text box, "If that creature would die this turn, exile it instead." Necrotic Wound can essentially act as a mono-black Swords to Plowshares, which is a pretty big deal. Some graveyard decks want to make sure they're the only ones who can manipulate their dead, and want to remove other folks' chances of reanimating enemy creatures. One cool trick you can do with this card, even if you have zero creatures in the graveyard: combine it with another removal spell, or in response to a board wipe. Even if Necrotic Wound doesn't kill the creature, it'll still get exiled when the other effect removes the creature. I feel like I'm spending an inordinate amount of words discussing new removal spells, but Golgari is just killing it with removal in this set. The Status half of Status//Statue allows a low power creature to pick off a large attacker or blocker, while Statue is almost a green/black version of Utter End. This card is great alongside removal classics like Putrefy, Beast Within. and Vraska's Contempt in BGx decks like Thrasios, Triton Hero + Vial Smasher the Fierce, Damia, Sage of Stone (for that sweet Gorgon flavor!) and Kresh the Bloodbraided. I expect this to see plenty of play. Where Moodmark Painter goes tall, Swarm Guildmage goes wide. Paying four and a black to give your whole team +1/+0 and menace is a finisher effect if I ever saw one. Iroas, God of Victory has taught us that menace is a very good ability, and with this, Golgari swarms get much better at the actual act of swarming. Now, I have... opinions... about Izoni, Thousand-Eyed, which you'll see a bit farther down, but I must say, Swarm Guildmage makes her an absolute killing machine. Slimefoot, the Stowaway, Nath of the Gilt-Leaf, and Hapatra, Vizier of Poisons also get huge combat kick from this card, and that's just in this exact color pair. I think the five-CMC activation of the ability will initially scare some people away until they see it start to win some games and then it will start cropping up in all kinds of BGx token-based lists. Last removal effect, I promise! Surely you saw Assassin's Trophy during spoiler season? It seemed surreal, right? Go ahead and re-read it. Now pinch yourself. No, you aren't dreaming. Wizards really printed a two-mana instant that blows up absolutely anything an opponent controls and replaces it with a mere basic land. Really. I don't need to say what's already been said so many times already. This card is a multi-format automatic staple. Pick up as many as you can. Hatchery Spider is a fixed-cost Genesis Hydra that nets you a green permanent from the top of your library based on the number of creature cards in your graveyard, rather than the amount of mana you sink into it. I think this card is fine. It's right about on par with Genesis Hydra, which sees play in a little over 6,000 decks, which is a solid, respectable number. The main thing that will dampen its statistics is simply that it must be cast to get its effect, which is less exciting for all those Golgari reanimation decks. I'll be honest—I don't like Izoni, Thousand-Eyed. I'm not keen on the double black and double green in her mana cost, but what really makes her fall short the requirement of two colored mana for her activated ability. I don't like paying for my sacrifice outlets; paying two generic mana would be a lot, so a whole green and black each time is just right out. Some people are talking about putting her in the 99 of Vaevictis Asmadi, the Dire, and that seems fine. She's fine in any kind of reanimator build where you just want a cheap swarm of tokens, like Mazirek, Kraul Death Priest, but I think, overall, there are better Golgari commanders to be brewed. Mausoleum Secrets is excellent. The floor is high, and the ceiling is higher. You don't need many cards in your graveyard before you can start fetching cards like Slaughter Pact, Reanimate, Waste Not, and Toxic Deluge. There are fewer targets for this card than a usual tutor, but for two mana, it's probably worth it in a mono-black or two-color deck. The fact that this card is instant speed is surprising but very welcome. You can respond to a Bojuka Bog trigger or Scavenger Grounds activation before it resolves to still get your big black card. Just be careful not to cast Mausoleum Secrets when someone could get you with a Rakdos Charm! Underrealm Lich is the best long-term card advantage effect black/green has gotten in a long time. Of special note, this card benefits Sylvan Library the same way as Abundance. Each time you draw a card with Library, Lich's replacement effect lets you put one of the top three cards in your hand, and when Sylvan Library checks how many cards you've drawn, it sees that you haven't drawn any. Thus, you don't have to put any cards back on top of your library and you get to keep all three cards for no loss of life. Even without Sylvan Library, this card provides advantage on two axes: it filters your draws, keeping your hand stocked with the best cards that you need access to, and it funnels everything else into your graveyard, stuffing it with juicy reanimation targets, cards with flashback, and so on. This card is an instant all-star in GBx graveyard decks. I can't do this set review and not talk about Vraska, Golgari Queen. Currently, there are a lot of mixed opinions about her. I can't help but like her. She's not pushed. She's not great. But she's cool. Her plus doesn't protect her, but it's a decent sacrifice outlet, and it draws you a card. Her minus is a sorcery speed Abrupt Decay, and that's fine. But her ultimate, oh baby. I know it's not good, but the idea of ulting her with a big board of stuff and just crushing each opponent with that emblem really excites the Timmy in me. I'm probably going to try her in my Tymna, the Weaver + Sidar Kondo of Jamuraa hatebears deck, and I'm willing to bet she's decent in Virtus, the Veiled + Gorm, the Great decks.

In today's action segment, I'm going to feature my Jund lands-matter deck. It's more battle-cruiser-y than my typical builds but in playing it, it's been a lot of fun. It runs a lot of creatures for a lands deck, which works in concert with Golgari's set mechanic Undergrowth. This deck is mono-permanents, so you won't see some of the very excellent instants and sorceries like Mausoleum Secrets in this brew, but there are plenty of goodies in GRN that smooth the deck out and bring it crashing to victory.

So, what do you think of Golgari's new goodies? Which new green-black cards do you think will rise from the undergrowth to the top statistics on EDHREC? Let me know your thoughts in the comments and on Twitter!