How to Play the Silverquill Statement Precon in EDH 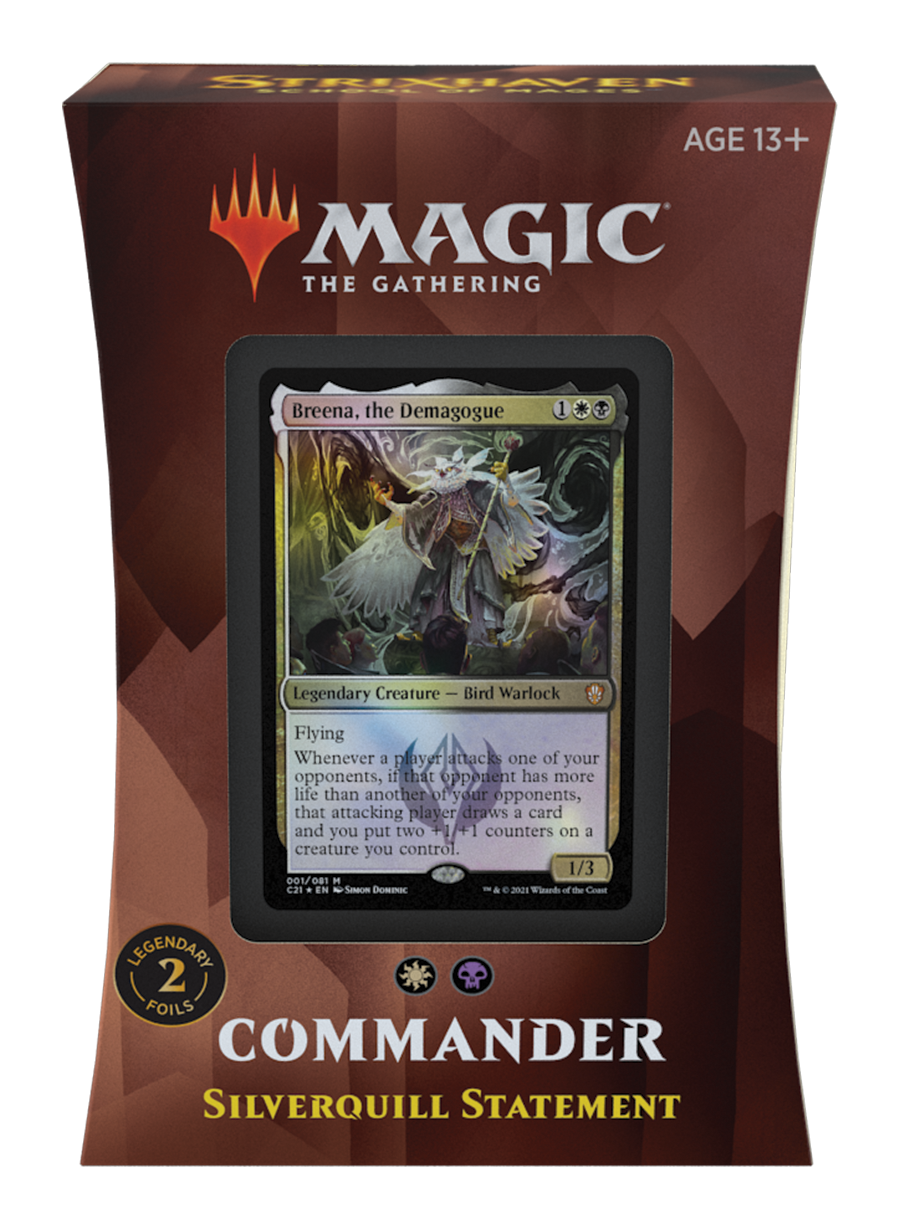 This is the complete guide to successfully piloting the Silverquill Statement preconstructed deck, commanded by Breena, the Demagogue. This guide holds all the information needed to maneuver the deck to victory straight from the box!

Silverquill Statement is a political deck that dabbles more into politics than any other precon released to date. It wants to land Breena as soon as possible, and use combat, evasion, and +1/+1 counters to finish opponents off.

Despite the fact that Breena is the most important cog in this machine, many players have misunderstood the wording of its ability. Breena’s controller can trigger Breena’s ability twice on their own turn, by attacking two separate opponents, each with a higher life total than the third opponent not being attacked. In this instance, Breena’s controller will draw two cards and place two sets of two +1/+1 counters on creatures they control. On any opponent’s turn, that player can trigger Breena once if their life total is higher than the other two opponents, and twice if their life total is the lowest among opponents. To resolve these triggers, the opponent attacking will draw a card for each trigger, and Breena’s controller will then get to put two +1/+1 counters on a creature they control. This is the crux of the deck’s strategy: Breena, or some other evasive flying creature, will grow to enormous size and be able to take out opponents in a few swings.

To supplement Breena’s ability, the deck has political aspects that will encourage attacking and create more Breena triggers while keeping itself ahead.

Silverquill Statement isn’t a deck that closes out games quickly. It has to leverage its advantages and continue to apply pressure over several turns in order to eliminate a player. Its primary threats are much slower than those of the average deck.

For a deck that aims to control the pace of the game, Silverquill Statement is actually light on removal. Unfortunately, this deck will be unable to police every threat at the table and will have to instead resort to going over or around them.

Every preconstructed Commander deck will have overperformers and underperformers, and there are a handful of cards in this deck that won’t be pulling their weight.

While the deck does have its glaring weaknesses, there are some overperformers that will help make up for them.

Overall, Silverquill Statement is rough around the edges, but can generate lots of power and toughness through Breena, and does have decent means to close a game out, as long as the deck can apply that pressure long enough to take out three plays. Knowing its weaknesses and playing towards its strengths can make the difference between a loss and a victory in Commander!