Librarian Lore: Beetles, Bolas, and the Road to Eternity

Welcome to Librarian Lore! My name is Casey Spark and I will be your guide through making connections to the real world cultural and mythological influences on your favorite commanders! I have been playing Magic: the Gathering since the original Ravnica block and Commander since I picked up my first copy of Heavenly Inferno. (for MSRP no less!) That gives me about a decade of experience playing, brewing, and swinging for lethal. When I’m not playing Magic, I usually pound keys on either my first graphic novel or some form of assignment to finish my Masters Degree in Academic Librarianship. I essentially went to school and never wanted to leave.

So, take my hand and let’s go for a walk!

Librarian Lore explores mythology and cultural influence within the canon of Magic cards. I’m interested in discussing the format's heart and soul, the legends that make the backbone of this game we call Commander. For more on the world-building and planes themselves I would refer to the excellent Historically Speaking series by Charles Allison who goes more much more in-depth into the planes and how outside cultures built the many worlds of the multiverse.

This series intends to zero in on each Commander its place in the plane, the lore around it, the real mythology that influenced it, and lastly maybe give you a little insight into how your commander thinks. Each article will select a commander at random, some legend from some far-flung plane of the multiverse, it could be a god, a human, or some other entity.

So, who is the lucky commander set up for our first round? We’re opening with this creepy crawler…

The Scarab God is currently the 4th most popular Dimir colored commander on EDHREC. Within canon, he served a critical role in the prophecy of the God-Pharaoh. It was his job to lead the army of the Eternals from the Necropolis into to the city of Naktamun. But what are Eternals?

I Shall Ride Eternal Shiny and…Blue?

You’re going to learn I’ll never pass up a Mad Max Reference. Now the Eternals are a bunch of zombies. Like Bolas’ own personal War Boys they’re dead men walking. But they’re certainly not your average shuffling undead a la Romero. The process to becoming an Eternal is a long one and was a core aspect of Amonkhet storyline; to summarize, passing the trial of the five gods of Amonkhet earned the winner the esteemed honor of dying at the tip of Hazoret’s spear for what they believed to be a glorious death leading to a great afterlife. In truth, Bolas had lied to them, a shocker for anyone who knows the smarmy dragon. The bodies would be transferred to a large necropolis and become enshrined in a magical blue stone called Lazotep. It’s what gives guys like Neheb the Eternal here their shiny blue paint job.

But more than making the creatures look like a heavy metal version of the Blue Man Group, the Lazotep’s magical properties preserve the living soldier's skill and prowess, but none of the disadvantages that arise in living beings, such as emotions, hesitation, or disloyalty. Bolas has personally crafted all of Amonkhet to create just such an army. The five virtues of anointed in the trials are twisted into Tactical Thought, Adaptability, Resilience, Ruthlessness and Fanaticism, virtues more to Bolas personal needs. He adheres clearly to Drudge Skeletons school of thought on soldiers.

However, it’s when we look at real-world scarab symbolism that the true depth and depraved genius of the elder dragon’s twisted mind comes into full light.

The Sun Also Rises: A Story About Poop (Kinda)

Okay, so it’s not really a story about poop. In truth, the Egyptians believed the scarab beetle wasn’t born but spontaneously came into existence, fully formed, from balls of dung that the beetle would roll across the ground. The truth is of course that the beetle larvae is incubated inside the dung ball until it emerges. But, they saw the beetle rolling the ball across the ground and associated it to the ball rolling across the sky thus, Khepri, god of the rising sun, was born. He looks really familiar… The God Khephri (blue-skinned, wearing on His head the sacred scarab, holding the ‘Ankh’ and the 'Uas’-scepter) standing inside a shrine; behind Him, a falcon-headed God steering the sacred barque (Courtesy of the Museum of Cairo)

Or perhaps to put it more bluntly: 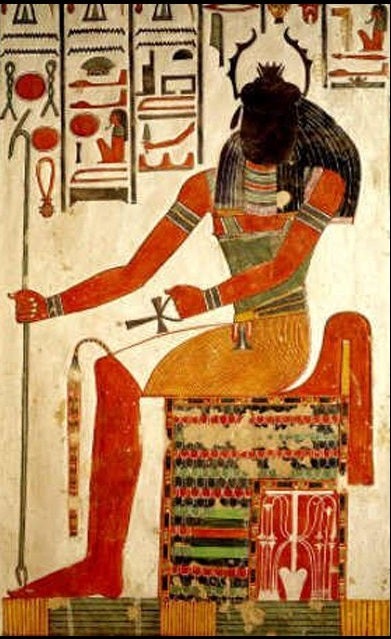 He looks familiar, doesn’t he? A beetle headed God but Khepri couldn’t be further from the Scarab God. Khepri is, in fact, a deity whose name translates to “He who comes into being” or alternatively “He who creates”. The Egyptians believed in a threefold sun cycle. Khepri was the representation of the rising sun, the more familiar Ra the noonday sun, and Atum, the setting sun. Khepri is a rather minor deity all things considered, and is often grouped as a subordinate to Ra. However, it is that minor role he plays as the rising sun that’s key to recognizing the maniacal genius that is Nicol Bolas’ idea to use a Scarab to lead the Eternals.

See, the Egyptians believed that every sunrise was a gift, it meant that Ra has successfully piloted the sun past this snake guy Apep who had a hankering for spicy food like you won’t believe. He wanted to eat it. So Khepri, in his role as deity of the rising sun, birthed the sun anew each morning and it’s that process of rebirth and Bolas’ perverse twist on it that shows the kind of malevolent genius we’ve come to expect from Ernst Stavro Blofeld of Magic.

For the conclusions of these articles I like to discuss various mechanical ideas for The Scarab God. I want to hit on four reanimator targets that you may have missed if you’re just using EDHREC to lift ideas. (As good a resource as it is!) I’ll also be avoiding any zombies because come on, that’s just too easy. 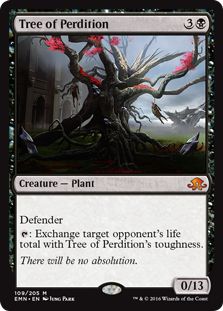 What’s better than reducing one opponent’s life total to 13? Reducing it to 4 the second time around. The old hanging tree will definitely be perceived as a threat right away so maybe be prepared with some tree-sized boots for full advantage.

You'll notice a theme with a couple of these, since they start out smaller than the 4/4 that The Scarab God returns from the grave. Eternalization is supposed to be an improvement after all, and this little guy is the perfect example. Starting as a 1/1 annoyance famous for bouncing lands back to the opponent’s hand, this guy could break backs as a 4/4 doing the same you just have to find a way to get him safely into the red zone! 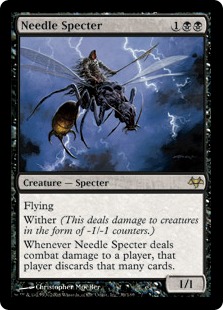 Okay so this is a pet choice. I love Specters as a creature type. A simple 1/1 this takes the classic attack discard strategy of the Specter and with the help of The Scarab God turns it into a brutal hand-destroying engine. Wither is also a great ability meaning even those flyers that can block this wasp mounted nightmare will remember they crossed paths long after. 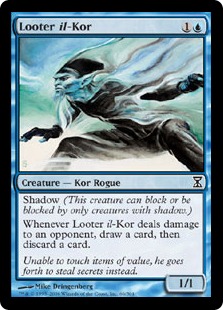 This guy is in only 14 Scarab God decks right now! 14! Sometimes simplicity is best friends and this simple Shadow Rogue may as well say unblockable and being able to draw a card and fuel some of our greater re-animator targets with the discard outlet seems like this guy would be great!

In Our Next Chapter...

I hope you will join me next time when we explore the mysterious identity of Gishath, Sun's Avatar according to the South American fossil record.