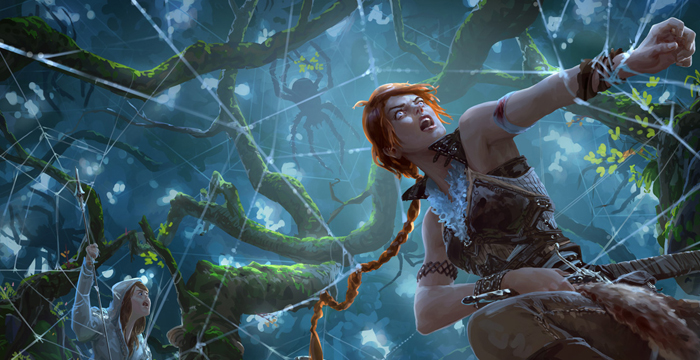 Hello and welcome to another installment of Lore Seeker, an article series devoted to the legendary creatures to whom Wizards of the Coast forgot to give a story. I’ll guide you through each fragment that makes up a legendary creature and finally give them a little extra background love. This time around we’ll be highlighting Thantis, the Warweaver.

A giant and malevolent spider who spins a monstrous web of burning mana across a vast forest, inciting rage in every creature that stumbles into its tangle. The fury of her prey feeds her own ferocity before she feasts on their corpses.

What is the influence of this spider on the forest where she spins her burning web? What is life like for the denizens of that very same forest? Tainted.

The monstrous web of mana creates an energy source for creatures and plants to feed off of, inciting rage and filling their hearts with hate. Beasts grow larger, humans grow sour, and the land grows lush with rot. Thantis sits atop the food chain of nasty critters and bog dwellers in her dank, humid swamp. Haze Frogs, hags, and horrors fight for control of areas most saturated with the web's mana. There is an Overabundance of mana in these locations, but it comes at a cost. Manabarbs and Burning Earth are additional great representations of the Thantis's influence on the world.

Weave: interlace; contrive - to plan with ingenuity or form designs.

Her name implies a rather large intelligence. Was this creature born with that intelligence? Is it something she harnessed from the world around her? Was she herself tainted from the start? Or was she created by someone or something to serve a malicious purpose?

Thantis was once the familiar of a witch that lived in this forest, an intelligent hag that made deals and took what she wanted. The hag has died, but Thantis has carried on her master's work. Continually growing in size from constant feasting, her power has reached new heights and expanded her area of influence, whipping more creatures into a frenzy, drawing them to her, feasting on them, and growing more powerful, etc., etc.

For this reason,our final deck will include a Witch/Hag subtheme, and I've even given them their own familiars. Thunderscape Familiar works quite well as ramp (and is part of a familiar cycle you should probably take a look at). Additionally, boggy Frogs are excellent familiars, especially ones as deadly and powerful as The Gitrog Monster.

Black: "Do what you want until someone more powerful stops you."

Red: "Live life how you want, rules be damned!"

Green: "Life is a cycle - what lives must die."

Jund is the color combination that embodies the most raw and brutal aspects of nature. Green makes creatures large, red makes them act with minimal foresight, and black makes them take power for power's sake. A high instinct to survive must be instilled in order to exist in Thantis's forest. Survival of the Fittest in its fiercest form. To embrace the feel of natural selection the majority of our removal is in the form of fight cards; Ulvenwald Tracker and Nature's Way are a couple versions of the effect we are looking for. And after the beasts fight, they Feast on the Fallen. Thantis is a creature that I do not want to mess with; she has all the warning signs of being horrifically dangerous, and her design is reminiscent of a Red Widow, also called the Latrodectus Bishopi, one of the most dangerous spiders on the planet. It boasts a neurotoxin in its venom that can cause permanent muscle spasms in its victims. Yippee!!

Luckily this spider is only located in central and southern parts of Florida, living primarily in Palmetto bushes. You know, these things that are everywhere in Florida? Yeah, they hang out in these... I'm never going to Florida. A bite from a Red Widow is rarely fatal, as they are too small to deliver more than 1/5th of a lethal dose to a human, but still.

Also, is something crawling on me...? Let's move on.

Tribal is a huge theme on EDHREC, and not only for Thantis: a large majority of the creatures I have written about have many tribe-related cards in their top cards. Thantis being the first legendary Spider with the colors to run all previous Spiders (minus Ancient Spider and Pale Recluse), it makes sense that nearly every playable Spider makes an appearance on her EDHREC page.

Unfortunately, Spider tribal doesn't have enough support yet to make a dedicated Spider deck. The best Spider-related card (and the only one we are running) is Arachnogenesis. It fits really well in this deck; combat is going to be a huge component of these games, and there are going to be plenty of times where we will be unable to block. This spell is perfect for Thantis and belongs in every one of her decks, which means that the 59% of Thantis players who aren't running it need to step their game up!

I love the flavor in her abilities. Vigilance allows Thantis to block and attack with impunity, while reach ensures the she can block almost anything coming at you. She feeds off of the energy from attacking creatures, increasing her power and toughness. She also puts a definite clock on the game; forcing attacks will draw a lot of hate towards us, which is good for Thantis, but bad for our supple, soft bodies, so defense is going to be just as important as offense.

We're going to come at this from two angles: preventing combat damage, and encouraging combat between other players. As mentioned before, Arachnogenesis is a fantastic Spider card, but it also helps with our plan of preventing damage. Constant Mists, Lull, and Moment's Peace fill out our protection package. Crown of Doom and No Mercy are going to have our opponents looking elsewhere for attacks, while Disrupt Decorum leaves them with no other choice.

Thantis's flavor text reminds me of a witch's brew, or the witch from Hansel and Gretel, luring unsuspecting victims and modifying their minds with one concoction or another. This line of thinking is what brought me to the sub-theme of Witches in the first place. It reminded me of the "combo" of Festering Newt, Bogbrew Witch, and Bubbling Cauldron.

Without much tutor support, these three cards would be really hard to find, and even when they are together, the effects are pretty underwhelming. So unfortunately, these cards did not make the cut. Instead, I decided to go the route of Accursed Witch and Bitterheart Witch, using curses to hinder our opponents. I also found a gem of a removal spell for this deck in the form of Witch's Mist, which repeatedly destroys any creature that tries to block.

Shadowmoor has the perfect scenery for this deck. It's dark, misty, and overgrown. I can visualize Witches and Spiders living all over this place. *shivers*

The most expensive card in the deck by a long shot is Survival of the Fittest. It is incredibly powerful and cannot be printed again. Fauna Shaman is a fine approximation of the effect and will do the job in a deck like this if you're looking to trim the budget. She also fits well flavorfuly as another forest-dwelling sorcerer.

This is a very slow deck. Take your time to set up and wait for a good handful of creatures to hit the battlefield before Thantis arrives. This is some true "battlecruiser" Magic, waiting until late in the game to throw down haymakers.

This deck went through more iterations than I usually do for Lore Seeker. I have been fascinated by the idea of a combat-focused deck, but making it five colors with O-Kagachi, Vengeful Kami as the general. You get access to more tools, and I think by adding colors you are able to hone in on the very specific disadvantage that Thantis forces upon you. There are also a larger number of defensive cards available to you in blue and white that prevent people from attacking you. I think a deck like that is what will more likely be seen from Thantis, as attack and combat triggers are all over her page. Even so, I think this version of Thantis would be a lot of fun to pilot. I can't imagine it will win many games, but it will make a serious impact on those games by spinning a sinister web.