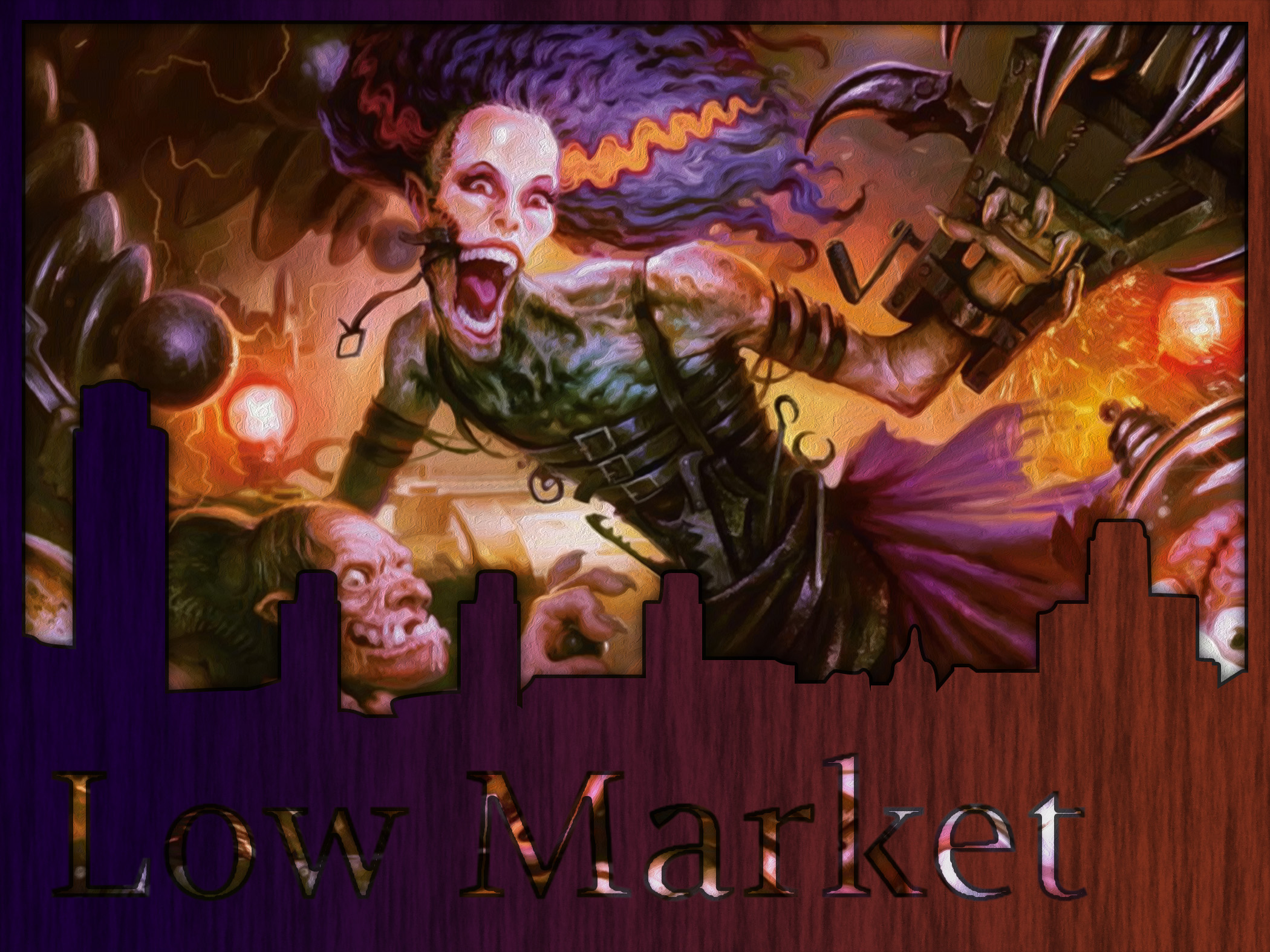 Juggernaut is a very particular creature type with some very particular baggage: Juggernauts are generally artifact creatures, and frequently come with an "attacks each turn if able" clause. I believe I am already somewhat notorious for going all-in on strange themes, so perhaps you understand why Juggernauts caught my eye, and why Grusilda seemed the perfect opportunity to use them. What's more Juggernaut-y than smacking your opponent with a creature till it dies, stapling it to another Juggernaut, and then attacking with the unstoppable combined monstrosity?

If you want to play a more traditional (i.e. 100% black-bordered) game of Commander, or want an option for opponents who would rather not play against silver-bordered commanders, we have Rakdos, Lord of Riots. The stereotypical Rakdos deck is dropping massive Eldrazi on turn 5, and we can do the same, albeit with worse creatures. Since we always want our Juggernauts (and their associates) attacking, we have a lot of opportunity to damage opponents and profit from Rakdos' cost reduction.

Juggernauts are not exactly... subtle. And neither is one of our usual paths to victory: beating down enemies with creatures that we physically can't stop from attacking. There are a few more shall we say... nuanced paths to victory, involving Juggernauts or their artifact associates. With an evasive effect like Rogue's Passage, Phyrexian Juggernaut takes two hits to kill, or one if we have double strike with Berserkers' Onslaught.

One of the odder Juggernauts, Leveler, is a high-power, low-cost creature in exchange for... exiling our entire library. In most cases, this would mean our death in one short turn. In this case, however, we have two obscure enchantments to help us: Words of Waste and Words of War. As long as we keep Leveler in hand until we retrieve our choice Words, we can stave off death while grinding opponents down.

For this next sometime win-con, I'm making the assumption that when a combined creature dies, its individual components return to their respective graveyards. Putting aside what happens when we assume, Hope of Ghirapur is a teensy tiny thopter that can temporarily prevent a single player from casting noncreature spells. When Grusilda is at the helm, we can theoretically recur Hope of Ghirapur every turn, attached to some other poor sap. If an opponent lacks flying creatures, or if we have evasion, we can lock a single opponent out of casting noncreature spells, save for the occasional instant on our turn.

A critical component of designing a Rakdos, Lord of Riots deck– or, at least a deck that might sometimes use Rakdos– is a means of causing life loss so that we can cast him. In most situations, I imagine that our creatures can get the job done. That said, it's always nice to have a backup plan, for recovering from a boardwipe, or for getting through a field of capable blockers. So as not to step on Grusilda's (likely numerous) toes, most of that Rakdos-support lives in our land base. A surprising number of lands can cause loss of life; not much loss of life, mind, but we only need a bit to get our black-bordered commander on the battlefield. Shivan Gorge and Sunscorched Desert deal a teensy bit of damage (which causes loss of life), and Piranha Marsh also take a little shred of health.

It's been quite some time since a Sideways Strat, but this isn't going to be a conventional discussion of unconventional tactics. Offhand, I don't quite know what this is. This is an interesting time for the Magic community. We have the release of the most experimental set in years, at the eve of Magic's 25th year of existence, running in parallel with well-founded concerns about discrimination and inclusivity. These, combined with introspection about my own life, leaves me in a strange place.

As I moved from high school to college to what comes after, I've found myself drawn more and more often to games with a social component. As I came to understand myself, I determined that what I loved more than games was the ability of games to connect me with people. Indeed, the vast majority of games that I play these days, whether physical or virtual, are games I can play with others. I am fortunate to live in an inclusive region of the world, where even as an openly-transgender girl, I can continue to derive enjoyment from the games that I love. I am fortunate that, counter to all of my expectations, I have not been discriminated against in this community that I love. This is a privilege. But this does not belittle the fact that so many people do face discrimination, even in something as simple as playing a game.

I've said it before, but it bears repeating: I absolutely love Magic. I honestly do not know what my life would be like if not for Magic, and it kills me inside to know that there are people who come to this game, who come to this thing that I love so much, and are turned away. Worse, they are often thrown out, forced by a stream of vitriol and slurs and harassment. This leaves me frustrated, every day, because I don't know how to stop this. I don't have a convenient answer to sexism, or racism, or homophobia, or any form of discrimination, whether it takes place in this community or any other community. All I have are a few small platforms, places where I usually provide my take on a fun budget deck, or enumerate my thoughts on the newest set.

In times like these, I turn these platforms over in my hands, thinking about what I can do. Not much, I fear. Lacking solutions, I will at least ask this: don't make inclusivity a "Sideways Strat". Take it. Run with it. Make it a four-of in every Constructed deck, and a prominent one-of in every Commander deck. Maindeck inclusivity. If you love Magic like I do, share that. Hand a copy to everyone who comes to investigate what you already know: Magic is an awesome game, and everyone who wants to play it deserves to discover that love too.

Until next we meet, perhaps think about what you can do to make your Magic community more inclusive.