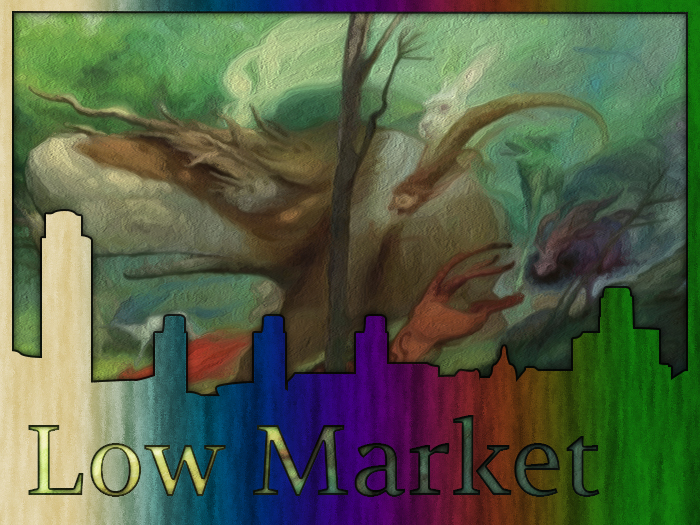 When you build as many strange decks as I do, you might start to notice a trend: why are all these oddball concepts turning five-color? Five-color voltron, five-color superfriends (i.e. planeswalkers), five-color spellslinger– sometimes, you just want it all. Today on Low Market, we will have it all: we're building five-color enchantress, featuring the Hondens! Our goal is to get out as many of the Hondens as possible, so that their scaling abilities can take over the game. Honden of Night's Reach is likely the easiest way to cripple opponents as we work towards the kill. Honden of Infinite Rage and Honden of Life's Web play dual roles, either whittling away or buying us time. Honden of Seeing Winds gets us a steady stream of cards, and Honden of Cleansing Fire sustains us a little bit (though its primary purpose is to strengthen our other Hondens.) This is a Commander deck that won't be too dependent upon, or themed around, its commander, so any old five-color creature will do. I'm partial to Horde of Notions as a strong blocker and potential beater (if the need arises).

Before we worry further about weird Kamigawa-block enchantments, let's talk about card advantage. The deck takes its name from cards like Argothian Enchantress: colloquially, "enchantress" usually means "effect that draws you cards from playing enchantments" (which is why a card like Eidolon of Blossoms is also considered an "enchantress"). While the deck will frequently strive for card advantage through Honden of Seeing Winds, the enchantress effects will help get us additional gas. Other excellent enchantresses include Verduran Enchantress and Mesa Enchantress.

With a deck so focused around a particular set of cards, we need more than our fair share of search effects to find them. I often appreciate Plea for Guidance and Increasing Ambition for their ability to find multiple enchantments, usually setting up our next turn. As I tend to do in nearly every budget black deck, let's include Diabolic Tutor. It may not be the strongest tutor, but it consistently costs only a few cents. Wild Research is a bizarre enchantment that is difficult to find a home for usually: I think its first activated ability alone makes it worth including in this list. For further shenanigans, we could make a small package of instants to fetch: Utter End for spot removal, Fated Retribution to wipe the board, or Counterspell as, well, a counterspell.

I will admit, building the mana base for a five-color deck can be difficult, even more so when we're trying to stick to the budget side of life. The good news is that there are plenty of auras to enchant lands and let them generate more, or more flexible, mana. I don't recommend these for most decks, because it often makes your lands a high value target, but it's too mechanically- and thematically-relevant to ignore for this deck. Abundant Growth, Weirding Wood, Nylea's Presence, and Unbridled Growth all do (or can) draw us a card, making the danger of losing a land less crippling. Market Festival and Dawn's Reflection are a bit more expensive but generate two mana on top of what the land already produces. Finally, Trace of Abundance ramps us while protecting the land it's attached to.

To avoid putting all of our eggs into one enchanted basket, let's add in a few of the staples: you can't go wrong with Kodama's Reach, its younger brother Cultivate, or their larger cousin Explosive Vegetation.

We began this deck with a central win condition in mind, but achieving Honden victory is going to take a little more effort than that. As such, let's discuss how we can keep ourselves alive long enough to Honden 'em out, and what Plan B looks like when we need a new strategy.

As enchantments go, the Hondens are pretty strange. Even stranger is one of my favorite pieces of support: Paradox Haze. An extra upkeep doubles all Honden triggers as well as any other upkeep triggers we decide to include. Paradox Haze is so powerful that I'm going to add Zur, the Enchanter to our deck, who can also fetch Honden of Infinite Rage, Oblivion Ring, various pieces of ramp, and Wild Research.

To better protect ourselves, we can employ the many white enchantments that discourage players from attacking us: Ghostly Prison, Sphere of Safety, and Lightmine Field.

As much as I love going all-in on a strategy, I think we'll want a few win conditions outside of the Hondens. Token producers like Sigil of the Empty Throne, Ajani's Chosen, and Assemble the Legion will overrun our opponents with tokens if left unchecked. Thoughtrender Lamia does a lovely Honden of Night's Reach impression by forcing group discard. Starfield of Nyx acts as both recursion and potential midrange win-con, along with the risk of creature board wipes destroying our enchantments.

Once upon a time, Wizards of the Coast imagined how they could make the sorcery equivalent of a Legendary spell. The result: a cycle of Epic spells, which recast themselves every turn, while disallowing you from casting any other spell. The white card from that cycle, Enduring Ideal, is a slam-dunk for "weird take on an enchantment deck". Depending on how oppressive you are willing to make the resulting list, you can use cards like Dovescape to begin soft-locking your opponents. The aforementioned Paradox Haze is an excellent first target for Enduring Ideal, because two upkeeps means two searches. Note that if you were to copy the initial cast of Enduring Ideal (for example, with Reverberate), you will get two searches every upkeep.

Owing in large part to our cost-efficient mana base, our Hondens can bring sorrow to all for a mere $50.00 according to TCG Mid pricing. Next time Low Market rolls around, we'll be highlighting the new Legendary Creatures from Hour of Devastation, but between you and me, I'm at a complete loss as to which one to choose. If you'd like to help me decide on a category, cast your vote here, or leave a comment with your thoughts! As always, you can reach out to me on Twitter or email. Until next we meet, enjoy browsing the Low Market.