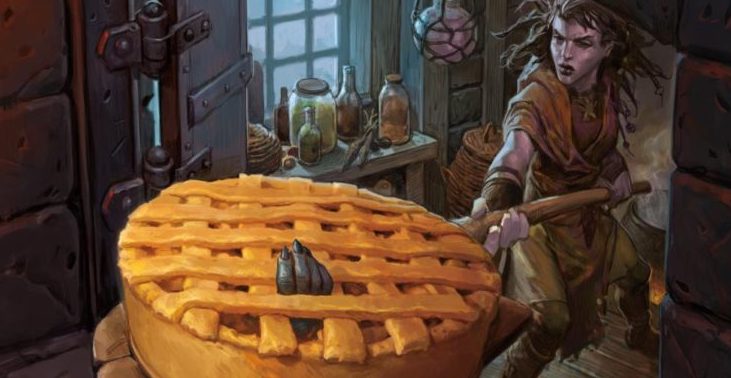 (Bake into a Pie | Art by Zoltan Boros)

Don't Read This On An Empty Stomach

Food. It keeps us alive. It's an essential ingredient of several major holidays. It's what we order at 3 a.m. from Grubhub when we probably shouldn't. And today, Food will serve as inspiration for an EDH deck.

Welcome to Mechanically Minded, the article series where we build EDH decks around mechanics using the hot tech of EDHREC. Today we’ll sample the tastiest new mechanic from Magic’s latest expansion, Throne of Eldraine. Hope you brought your bibs and napkins.

A Brief History of Food

Very brief. Food didn't exist before Throne of Eldraine. However, we can trace its approximate origins back to this card:

To my knowledge, Core Set 2015's Goblin Kaboomist is the first card to create expendable, noncreature artifact tokens with a minimal effect on the game (this is the part where commenters slay me with an obscure card from Homelands).

Anyway, assuming that's true, we got the best version of this design space in 2016 with Shadows Over Innistrad’s Clue tokens. Crack a Clue, draw a card. Though we also had Gold and Etherium Cell tokens, the next major token design that rose to prominence arrived in 2017’s Ixalan in the form of Treasure tokens, which tap and sacrifice to add one mana of any color. And now, Food. Some of this resembles the food from Troll 2, so I’m not eating it. But I will crack it to gain life every now and then. Or put it to better use...

Before we dig in, we need a commander. Since Food is almost exclusively located in green and black, we’ll start there.

My eye was immediately drawn to this card:

Eating Food in Magic is represented by sacrificing Food tokens. So, with Mazirek on the battlefield, every time we eat, our creatures get a bonus.

That seems good, but I think we can do better. What if we keep the same idea but add a third color. Enter Korvold, Fae-Cursed King.

His wedding didn’t work out, but at least he’ll still attend Golden Corral with you.

Korvold triggers every time we sacrifice a permanent, which is perfect for our Food tokens. Unlike Mazirek, he didn’t bring enough +1/+1 counters to share with the whole class—but the tradeoff is card draw instead; between you and me, I’ll take the card draw, please. Also, Korvold is a sacrifice outlet all on his own; Mazirek isn’t.

The best place to find the tastiest Food is Korvold’s commander page.

Yum. Savvy Hunter gives Korvold two +1/+1 counters and draws you three cards (one from the Hunter, two per Food token sacrificed). This is the beauty of Food tokens: they need not activate the lifegain ability to count as being sacrificed. To be honest, we may get more use out of them as sacrifice-able artifacts than for their lifegain.

Next, cook any creature in your Easy-Bake Witch’s Oven. That’s just more Food for a growing boy like Korvold.

Finally, Gluttonous Troll is a great guy to invite to your potluck. The more people who show up to the table, the more food he brings. Sure, he brought raw chicken and he’s got blood all over his mouth, but at least he's not coming empty-handed.

So far you've had one breakfast, yes. But what about second breakfast? Here's some more Food to consider:

The flavor for the card Taste of Death is off the charts in more ways than one. However, turning one's opponents' creatures into Food seems risky from the literal flavor standpoint. Their Birds of Paradise, for example, would probably be finger-lickin' good. Their Acidic Slime, on the other hand, would require a pound of Tums.

Golden Egg is cool because it’s one of two cards that are Food but not Food tokens (the other is Gingerbrute and we're running it purely for the name and artwork). The Egg is also a decent enough slot filler, so we'll take it sunny-side up.

For the next course, turn your menus to the Throne of Eldraine set page.

I’ll take a second helping of Birds of Paradise any day, thank you very much, though for all I know, this one might be banned in Standard by the time this article comes out. Gilded Goose is probably harder to chew than its colorful brethren, but Korvold doesn't mind. Each Food sacrificed by the Goose produces one mana, one counter for Korvold, and one card drawn.

Next, Bake into a Pie (strawberry rhubarb for me, please). It's admittedly clunky, but it's still an unconditional removal effect that fits our theme. Also, I like pie.

Finally, Trail of Crumbs. Korvold put this card on the menu because it provides additional card draw, and, better yet, card selection. If he ever gets sick of the Trail, he can eat that, too.

Here are a few more worth mentioning...

Bog Naughty's -3/-3 hit might not sound like much, but I find it's effective at picking off most utility creatures. Plus, among EDHREC's top commanders of the past month, it kills the following:

Those are some juicy targets. Let's get Naughty.

I like either half of Giant Opportunity. If we sacrifice two Foods, we get a 7/7 (and two counters and two cards, if Korvold is present). If we don't, we get more Food for our pantry. Love it.

And of course, Wicked Wolf is a must-include. Anything that sacrifices Food for free is especially powerful in our deck. Plus, with all that Food, our Wolf is going to be wicked hard to kill.

Yes, odd as it may seem, Food tokens are artifacts. Fortunately for us chefs, Magic is overloaded with artifact synergies. Here are several examples pulled from EDHREC's artifact theme:

Oooh, I like that last line of text. Get a counter on our commander and draw two cards for just one mana. I’ll have another helping.

This guy is a culinary artist. He doesn't want to eat Food, he just wants to admire it. Korvold, on the other hand, wants to chow down, so I’ll admit there’s some tension with both in the deck. However, Hellkite Tyrant is powerful even if we have zero Food. And, at its best, it’s winning us the game.

Every time we eat Food, Marionette Master whacks an opponent upside the head. I like that both from a gameplay and a slapstick standpoint. Unless there's a hyper-compelling reason not to, I recommend using Fabricate to put the +1/+1 counters onto the Master.

Now that it’s more affordable, I recommend buying this oven for your kitchen. It bakes Food just as well as it melts Myr, plus it rewards you with mana. I’m not a huge fan of plodding combos, but you could always include Modern’s erstwhile Ironworks combo in this deck too, if you’d like. If you don't, it's still an excellent card as a solo dish.

This restaurant has excellent reviews on Tripadvisor. Here’s one of the most helpful:

My husband and I were looking for a nice place for a downtown Ravnica date night and all I can say is...wow! So delish. Hubs and I ate, like, 10 Food tokens, which dealt, like, 10 damage to all the other patrons. So fun!

The only reason I’m not giving five stars is because the servers were literal Zombies, but oh, well. You’ve outdone yourself, Mr. Bolas!

Getting a Clue from Treasure

Earlier in this article, I touched on both Clue and Treasure tokens. They occupy enough common design space with Food that it behooves us to look into both. Let's start with EDHREC's Clue theme.

Dear diary: Tamiyo's Journal is a lock because it produces free Clues every turn, then gives us a mana-less way to sacrifice them all. Just don't read it without Tamiyo's permission—that isn't polite.

Tireless Tracker doesn't need my explanations to justify its spot. However, I will note that it gets +1/+1 counters anytime a Clue is sacrificed, meaning Clues need not be sacrificed with their own ability. In other words, Korvold can eat them and the Tracker still gets the bonus.

Ulvenwald Mysteries works the same way while also functioning as an engine card. Sacrifice a creature, make a Clue. Sacrifice the Clue, get a token that you can now sacrifice. The token doesn't yield more Clues, but that's still a nice chunk of value.

Dockside Extortionist is good in any deck and great in ours. Treasure Map // Treasure Cove is decent on its front side and outstanding on the back. Revel in Riches is more or less just for fun, but could actually win us some games under the right circumstances. Delicious!

Priority number one is getting Korvold online as fast as possible because he makes our Food so much better. Once he sits down at the table, start cooking your Food and force feeding it to him. Doing so will strengthen both your board and your hand, giving you fuel for the both the present and the future. Commander damage kills can be a legitimate method of victory, or you can leap ahead of the rest of the table just by virtue of sheer, overwhelming card advantage.

Hope you enjoy the deck! Let me know which mechanic you'd like to build an entire deck around on the next Mechanically Minded. Until next time!