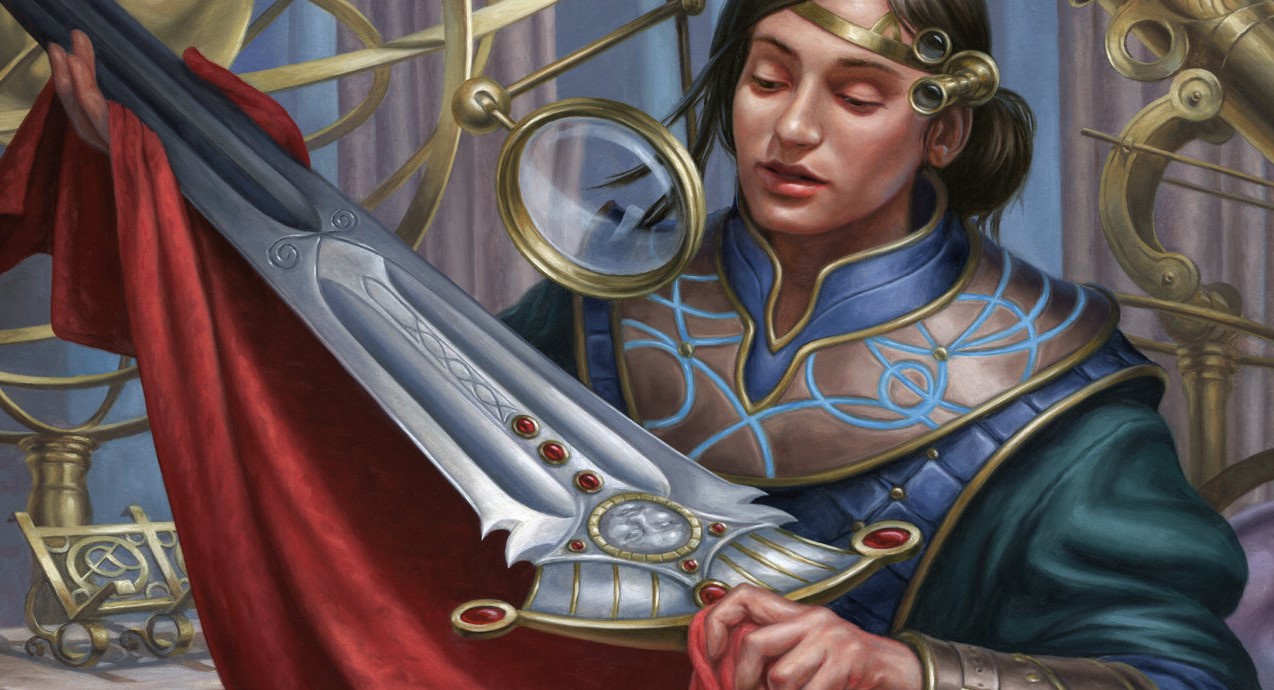 Although we're deep into Core Set 2020 spoilers, it's hard to forget about the set that just came out a few weeks ago: Modern Horizons. Magic content creators everywhere are still piecing out all the new playables from this supplemental set, and since new card spoilers are popping up more than those pesky summer weeds, it's easy to lose track of all the cool stuff we can now get our hands on.

That's not to say that Modern Horizons isn't chock full of crazy Commander cards - it is - but some cards might still need some highlighting, lest they forever be lost in the category of "hidden gem". One of those cards, for me, is Tribute Mage.

This is Just a Tribute

Admittedly, this card isn't going to be anyone's "#1 Pick" for the set, but it is the kind of role player that wins you games, albeit sneakily, by grabbing what you need, exactly when you need it. Tribute Mage comes from a proud lineage, starting with Trinket Mage, and moving up to Treasure Mage.

Each card has its use in Commander. Trinket Mage is perfect to grab a Sol Ring or some key answer, like Relic of Progenitus. Treasure Mage provides you with big Wurmcoil Engine beats or shut-down artifacts like The Immortal Sun.

The one I wanted to focus on most is Trophy Mage. According to its EDHREC page, it's being played in near 7,000 decks, and that's nothing to scoff at. However, when you look at the High Synergy section, and even the Top Cards section, you'll see exactly zero artifacts with a converted mana cost of three.

Perhaps the data is skewed by each deck's preference for what it wants to do at three mana, but it's hard to believe that not a single three-mana artifact made the top of the page. Even in the artifacts section on Trophy Mage's page, those that cost three make up less than a quarter of the choices, and many of them are just simple mana rocks, like Darksteel Ingot and Chromatic Lantern

Not that there's anything wrong with that, mind you. I mean, everyone needs mana rocks. However, it doesn't match what I first thought about what Trophy Mage could grab. The art depicts someone holding a sword! There are some really sweet Equipment at the three-drop slot!

And now, with Trophy Mage's little sister Tribute Mage coming along, we can also dig up Commander-staple Equipment like Swiftfoot Boots and Umezawa's Jitte? Count me in!

Since this is Mind Bend - the article series meant to break down conventional notions of deckbuilding and the color pie to forge new ground outside the confines of the already established - let's build a Boros Equipment deck... in blue and black.

How did I decide on using Boros as inspiration? It's simple: all 10 of the top 10 commanders on EDHREC's Equipment Theme page are either white (like Sram, Senior Edificer), red (like Valduk, Keeper of the Flame), or both (like Zurgo Helmsmasher).

Beyond that, though, things get more interesting.

Sigarda's Aid, Hammer of Nazahn, and Puresteel Paladin all have something in common: they reduce the overall mana you need to spend on Equipment, by way of making the first (or in Puresteel's case, all) equip costs free. This means that you get a total cost reduction between 2 and 6 on all Equipment you play. That's a sweet deal.

The Right Tool for the Job

Additionally, there are some great spells to search for Equipment: Open the Armory and Steelshaper's Gift are terrific low-mana tutors. Additionally, you have the Equipment powerhouses of Stonehewer Giant and Stoneforge Mystic that act as tutors and cheat costs of high-cost weapons.

The creatures section of the Equipment theme page has a few more things to say about the game plan. You will find creatures that want to be suited-up as much as possible like Kemba, Kha Regent, similar to the previously mentioned Valduk, Keeper of the Flame. Beyond this, you'll find general protection in the likes of Leonin Abunas and Grand Abolisher.

So the game plan is thus:

To convert this to Dimir, we might need to make some changes to the strategy. Currently, there are no curve toppers that care about Equipment in blue or black, so we'll have to be more sneaky with how we utilize our Equipment. Instead of crashing in with a giant mech, we'll gracefully glide in with our scalpels - cutting only exactly where we need to cut, which, I have to say, is very Dimir-like.

But first, let's go back and look at how we can reduce some Equipment costs in blue and black.

First and foremost is Grand Architect. I have been a fan of this card since I first played it in a janky mono-blue artifact deck in Standard. This card does so much, and it will be essential for our Equipment dreams. The key ability of Grand Architect is tapping our blue creatures to get two colorless mana which we can use "only to cast artifact spells or activate abilities of artifacts".

Let's break that down a bit more. Of course, getting two mana to help cast the likes of Swiftfoot Boots et al is sweet on its own. But it gets even sweeter when you realize that Grand Architect can also help pay for equip costs, as those are an activated ability of an artifact.

Grand Architect is cool, but that's just one card in the 99. Are there other effects like this? You betcha!

Vedalken Engineer and Renowned Weaponsmith both essentially have the Grand Architect ability stapled to them, whereas Soldevi Machinist is a little more narrow, but still helps out when we need it.

That's not to mention a few cost reducers that we have access to.

Etherium Sculptor paired with Grand Architect is oh so tasty. With just these two cards, we can cast and equip Sword of Feast and Famine without touching our lands. Swap Sculptor with Foundry Inspector and that interaction only costs you one blue mana.

Chief Engineer turns any available creatures into additional mana sources for casting our Equipment, akin to Grand Architect, though we will still be left to pay the equip costs.

Out to the Red Zone

With all this talk about Equipment, let's look at our payoffs for sticking to this strategy. Much like the previously mentioned Sword of Feast and Famine, we should utilize triggers from dealing combat to players.

Dimir has no shortage of evasive creatures that can give us more cards to play and/or force opponents to discard cards. For example, Dreamstealer naturally has menace, and can strip an opponent's hand based on how much damage it deals. Sending it in with a Sword of Feast and Famine would mean that Dreamstealer could force an opponent to discard four total cards.

Thada Adel, Acquisitor is a fantastic card for this strategy. She has built-in evasion with Islandwalk, and her combat damage trigger can help remove powerful artifacts from other player's decks. At worst, we get to take everyone's Sol Rings.

Thief of Sanity is a flyer that does a nice impression of Gonti, Lord of Luxury every time we connect with it.

Of course, our Equipment can get in on the combat damage game, too. Most players are familiar with the potent "Sword of X and Y" cycle, so I'll highlight some lesser-known Equipment that are worth playing.

The three Equipment above all result in card advantage in their respective ways. Mask of Memory lets us dig two cards deep on each hit. Mask of Riddles adds extra evasion to its wearer and gives us an extra card. Specter's Shroud boosts a creature's power and turns any creature into a psuedo-Hypnotic Specter. While an opponent discarding a card isn't as great as us drawing a card, we can be smart about which opponent we want to lose cards, which can help point the game in our favor.

Best of all, each of the above Equipment cost two mana, so we have a wide array of tools for our Tribute Mage to find!

While it's great that we have all this chip damage and incremental card advantage whenever we connect with a creature, we will still need a way to close out the game.

The above cards turn this deck from chippy aggro to downright murder. Remember earlier when I mentioned that we'd have to use our blades like scalpels instead of going full Voltron? It's because of the above. One thing that we don't have in these colors is a way to suit up one giant threat and smash face. There's no Balan, Wandering Knight for us. To compensate, let's let the Equipment (and in the case of Virtus, the creature) do the work.

Quietus Spike and Scytheclaw, in just one hit, can rip a healthy opponent, from 40 life to less than 20 all on their own. Strap one of these on any of the many evasive creatures in the deck, and you can carve up opponents with ease.

For our commander, I've selected Sygg, River Cutthroat because the deck should not have any problems dealing three damage each turn, and we can also net cards when other players hit each other. However, if you want to have an alt-win option with commander damage, you may want to swap out for someone beefier. The only issue there is that most of those commanders are 5+ mana, and can make the sequence of casting and then equipping the commander awkward and inefficient. However, I'm certain there's a way to do it, perhaps with less evasive creatures and more ramp.

Have we found a way to make Boros better by turning it into Dimir? That'll be up to you to decide. The Equipment strategy was strong to begin with, for anyone that has been on the receiving end of one. However, you'll see that Boros doesn't need to be the only color combination to hit people with a brand new Sword of Sinew and Steel. You can do that in any colors you want and have fun doing so!

See you again next time for more color-bent insanity!