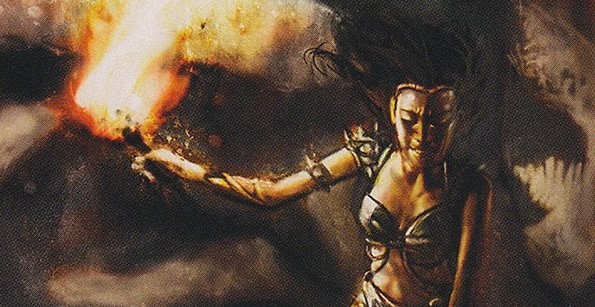 “There’s wisdom to be gained in death—whether it be one’s own or someone else’s.”

Ah, Orzhov. The white-black color pair most closely associated with organized crime, crooked churches, and death. Lots and lots of death. Sometimes some rebirth, too; probably for more death. But since Orzhov is crookeder than a box of snakes, you can bet that Orzhov decks are well-primed to capitalize on all that death. EDHREC's number one Orzhov commander, Teysa Karlov, is a living testament to that, currently in 11th place overall in popularity and weighing in at over 2,300 decks.

What would happen if we were to extort a bit of Teysa's spirit and place if firmly in the realm of Temur? You know: the blue, red, and green wedge known more for punching bears than any of this death business. Welcome back to Mind Bend, the article series that breaks down the conventional notions of the color pie to forge new ground outside the confines of the already established. Let's become the first aristocrats in Temur!

Teysa Karlov boasts over 1,800 decks on EDHREC specifically attached to the aristocrats theme. What makes a deck an "aristocrats" deck? Outside of being the punchline to a very famous joke setup, it's also a deckbuilding archetype associated with sacrificing your own creatures for all sorts of reasons, but mostly profit. Cartel Aristocrat says to "lesser" creatures, "Lay down your lives so that I may prosper off the back of a Grave Pact."

At the same time, our girl Teysa Karlov makes it so that Grave Pact is extra lethal to our opponents, doubling up that trigger so that everyone else is sacrificing two creatures to our one. What a bargain! But wait, there's more! If you act now, you get twice the number of tokens from creatures dying from our pals Requiem Angel and Pawn of Ulamog. Not convinced? How about we throw in double the cards from Grim Haruspex or two times the treasure from Pitiless Plunderer?

Yes, Teysa is truly the queen of death, death, and more death. If you look at EDHREC's average decklist for her aristocrats theme, you'll see nearly 25% of it is made up of cards that care about creatures dying in some way, and that's not including sacrificial lambs like Hallowed Spiritkeeper.

I've broken down the deck into the following death-tinged categories:

Since Teysa's whole shtick is death, traditional slots in Commander are overshadowed by the groups above. Straight, no-strings-attached card draw is minimal, and so is ramp. However, being the best two-color combination for removal means that you can answer just about anything with Anguished Unmaking and Merciless Eviction.

To sum up the deck's strategy - you live by your death triggers. You die by, well, the opposite of that.

Teysa Karlov wants to double all the nonsense that happens when creatures die. How can we do the same in Temur, a color combination that cares far less about things dying and more about how to make them die, especially when it comes to punching. Yes, I know that's a different timeline, the point still stands.

But what are some creatures that give immediate value by being copied, especially so that we can fuel our sacrifice dreams? It's Reef Worm's and Mitotic Slime's time to shine.

Reef Worm can go through three deaths, increasing in size from a lowly 0/1 to a mighty 9/9 token along the way. However, topping the death charts, Mitotic Slime works its way down, from a single 4/4 to two 2/2s to four 1/1s, giving us a whopping seven total death triggers to use at our discretion. Now, imagine doubling up the original creature with Riku in play. That's a whole lot of death we can dole out.

Similarly, we also have Hangarback Walker and Chasm Skulker that can both explode into an array of tokens. Walker might not be the best to copy with Riku, but even then it's still a death trigger for an extra two mana.

Not to be outdone, Nesting Dragon gives us twice the fodder for each land we play.

All of this token sacrifice can fuel the greatest death trigger in the game, which is found on Vicious Shadows. Shadows can melt life totals in a heartbeat. Got a player that's sitting with a comfy grip of seven? Make six creatures die and they're likely out of the game.

Although we can't hit each player a la Blood Artist, we still have a few other tricks up our sleeve. Goblin Sharpshooter and Hissing Iguanar make it so that any other aristocrats player can't get ahead on life. Otherwise, we punish the random Wrath of God. We can also smack one opponent with our Overwhelming Stampede of creatures, then sacrifice them to kill someone else post-combat.

For even more death triggers, Anax, Hardened in the Forge has a home here, giving us tokens for each non-token death. On a similar axis, Lightning Coils and Gutter Grime provide extra tokens after our creatures hit the bin.

We even have some death-tinged ramp for this deck. Awakening Zone and From Beyond both act as incremental ramp, key chump blockers, and free death triggers each turn. Sakura-Tribe Elder does extra duty and is almost never a dead card - even when we want it dead. Same is true with Solemn Simulacrum, and these are both creature that Riku loves to copy!

Traditional aristocrats decks love doubling their fodder, I mean tokens, with Anointed Procession, but green gives us the OG version Parallel Lives, and the even OG-er Doubling Season. Doubling Season: letting decks go from good to bonkers since 2005.

Obviously, we can also double up some of our sacrifices via both Cauldron of Souls and Lifeline, each of which lets us rebound our board straight from the graveyard for further shenanigans.

As far as ways to actually sacrifice creatures, Greater Good might need to change its name to Greatest Gooder. Since our creatures are more beefy than the typical aristocrats deck, each sacrifice will usually be for card quality, by way of 3-power creatures, if not for straight card advantage with anything larger. And since it's a free sac outlet, we can use it as a final burst of death triggers. Don't need cards in hand if the rest of the table is dead!

Other Commander staples find yet another home here: Ashnod's Altar and Phyrexian Altar provide some mana on the fly, Evolutionary Leap and Skullclamp let us dig hard, and Goblin Bombardment is always welcome!

The main thing we can't replicate in Temur is forced sacrifice effects like Grave Pact, so to compensate, let's just draw a bunch of cards with Sylvan Library and Return of the Wildspeaker, not to mention some death-based draw via Foster and Fecundity. Just make sure that you come out ahead on creatures with Fecundity, or punish the tokens player by sticking Vicious Shadows first. Make it hurt for them to draw.

This decklist kinda goes a bit old school, repurposing old Commander favorites to squeeze out extra value from each. We're getting all parts of the animal from Solemn Simulacrum, same is true for Greater Good. Fitting, given our commander comes from the original precons.

I think this decklist could at least put a smirk on the face of the queen of aristocrats, Teysa Karlov. We'll be racking up the death count, punishing our opponents for it along the way. Hey, someone's got to pay, might as well not be us. How could that be any more Orzhov?

Come back next month for another pint of mind-bending brews!